SPIEGEL: Mr. Dombret, you were born in the US. Do you understand why the Americans no longer appear to believe in Europe?

Dombret: American investors often have a very short-term approach. It's against this background that I understand the American impatience with Europe. But make no mistake: The US definitely believes in us. During the financial crisis of 2007-2008, the Americans sought a great deal of European understanding -- and they received it. By the same token, since the epicenter of the current crisis lies in a number of European countries, we now expect understanding from the US.

SPIEGEL: Following the collapse of the Lehman Brothers bank, the major economic blocs worked together to combat the crisis. But doesn't it seem today that the US and Europe are engaged in a kind of economic war?

Dombret: One cannot speak of an economic war. Without a doubt the euro zone bears the primary responsibility for resolving the sovereign debt crisis. But all countries now have to pull together to avoid contagion. And if we fail for instance to regulate the banks according to uniform international standards, financial institutions will exploit the differences.

SPIEGEL: Is that an appeal? The US currently seems to be moving away from standardized regulations.

Dombret: I can't corroborate that. In all international bodies and institutions like the G-20 and the International Monetary Fund (IMF), in which the sovereign debt crisis is discussed, all countries are pulling together. No one is seeking to back out of the crisis management -- and the US is no exception here.

Dombret: So far, the IMF has made no request to increase resources.

SPIEGEL: But the Bundesbank is not likely to receive either the desired approval of the German parliament for its planned contribution of up to €45 billion ($58 billion), nor will there be broad participation of countries outside the euro zone. The US is not the only country that appears to reject increasing the IMF's funds. Will you approve the line of credit under these circumstances?

Dombret: The Bundesbank is still prepared to make an additional bilateral line of credit available to the IMF. But we will only do this under certain conditions -- and it's important to us that the Bundestag approves this measure. I'm confident that these requirements will be met when the IMF request has been submitted.

SPIEGEL: What makes you so confident?

Dombret: At their most recent summit meeting, the heads of states and government of the G-20 and the EU reaffirmed the importance of providing the IMF with sufficient resources. Countries outside the EU like Norway, Switzerland and Russia have signaled their willingness to take part in increasing IMF financing. Support from the US is desirable in this context, but not a condition for the participation of the Bundesbank.

SPIEGEL: Is the participation of the UK a condition?

Dombret: The Bundesbank expects a fair sharing of burdens. If -- as you've suggested -- a heavyweight like the US fails to participate, it will be all the more important for other major IMF members to do their part. This certainly also includes the UK. The country has to be aware of its importance in the EU.

SPIEGEL: The US and other countries would like to see the European Central Bank (ECB) bring out the bazooka, in other words, undertake massive purchases of government bonds to resolve the crisis.

Dombret: That would be the wrong approach. Instead, the governments have to get their budgets under control. And it's not as if big government debts were a purely European problem. They are certainly not small in the US and Japan. Any kind of ridicule, no matter what side it comes from, is inappropriate.

SPIEGEL: But the ECB appears to be the last credible player. When will you give in and pull out the bazooka?

Dombret: The ECB cannot and may not serve as the "lender of last resort" for state finances. The solution to the sovereign debt crisis can only come from fiscal policy. The European Financial Stability Facility (EFSF) and the European Stability Mechanism (ESM) bailout funds have already been created as supporting measures.

SPIEGEL: Do they have sufficient funds to help cover the enormous refinancing needs of the crisis-stricken states, which amount to some €300 billion in the first quarter?

Dombret: It won't be easy for the states or the banks. What's more, the banks have a double burden: They also have to meet the new regulations and by the end of June reach a core capital ratio of 9 percent.

SPIEGEL: Will they achieve this?

Dombret: The situation is manageable. What is crucial, however, is that the banks improve their core capital ratio without driving the euro zone into a credit crunch. Otherwise this increases the risk of recession. Despite this risk financial institutions have to adjust their business models. Such adjustments have regularly taken place in the past. They shouldn't necessarily be seen in a negative light. Indeed, postponing them can pose significant threats to economic growth, as the "lost decade" in Japan has taught us.

SPIEGEL: There was a lot of criticism from the banks that they are now being required to enlarge their capital buffers. Is this the wrong time for such new regulations?

Dombret: When the economy runs out of steam, it's definitely challenging to increase capital requirements. But let me put it this way: If you see that the waves are reaching the top of the dyke, you're well advised to build a higher dyke.

SPIEGEL: How big is the threat of a credit crunch?

Dombret: This is not a threat for Germany. The German banking system has no liquidity problems and most German companies are doing well. This strong position has allowed them, bolstered by a strong economy, to build up a buffer and reduce their debt-equity ratio.

SPIEGEL: And in other countries?

Dombret: In the peripheral countries of the euro zone the situation is certainly tenser and there is a greater risk of a credit crunch. The banks' capital shortfall is significantly greater and, due to the weaker economy, they have more writedowns and greater difficulties refinancing themselves. Eastern Europe could also run into problems.

Dombret: In Germany, private-sector banks decide on their own what business strategies to pursue. We of course encourage the banks not to limit their lending. If they fail to achieve the capital targets, banks shouldn't hesitate to reduce dividends and bonuses and, if necessary, acquire equity -- even from the state -- if they cannot manage this on their own.

SPIEGEL: The recent EBA stress test performed on European banks gave the impression that the German banking system ranks among the weaker ones in Europe. Do you share this assessment?

Dombret: No. The German banking system is traditionally highly stable -- and I'm convinced that it will remain so. The risks come primarily from outside Germany. The greatest challenge currently facing our financial institutions is without a doubt the sovereign debt crisis.

SPIEGEL: Banks are among the leading purchasers of sovereign bonds -- particularly when issued by their own governments. Are you advising institutions to refrain from such business transactions?

Dombret: On the balance sheets it's assumed that sovereign bonds entail zero risk, in other words, they require no capital buffer. This needs to be re-examined, but this is the wrong time for such a debate.

Dombret: The idea is to stabilize the banking sector in a difficult situation and minimize as much as possible the burdens on the real economy. As a rule the banks are free to decide how they want to use the additional liquidity. In my opinion, it wouldn't be a sustainable business model if the banks focused on buying sovereign bonds with cheap central bank money -- this would be akin to a credit substitute business.

SPIEGEL: Politicians are shuttling from summit to summit -- but this has failed to solve the crisis. Has this robbed European sovereign bonds of their credibility for many foreign investors?

Dombret: First and foremost, individual countries have to win back lost investor confidence by enacting decisive reforms. Furthermore, investors need a clear picture of how the institutional structure of the monetary union will look in the future. This is where the EU decisions of December 9, which include quasi-automatic sanctions for budget offenders, have sent out an important initial signal. Now, we have to energetically implement these agreements. My experience from the private sector is that investors are not impressed by summit resolutions, but rather by concrete actions.

SPIEGEL: But all that takes time. The markets are expecting a quick solution.

Dombret: If politicians opted for a quick fix, the markets wouldn't be satisfied either. I think we shouldn't put the cart before the horse. Now that the cart has been built, we have to harness the horse. I'm confident that this will succeed in 2012. 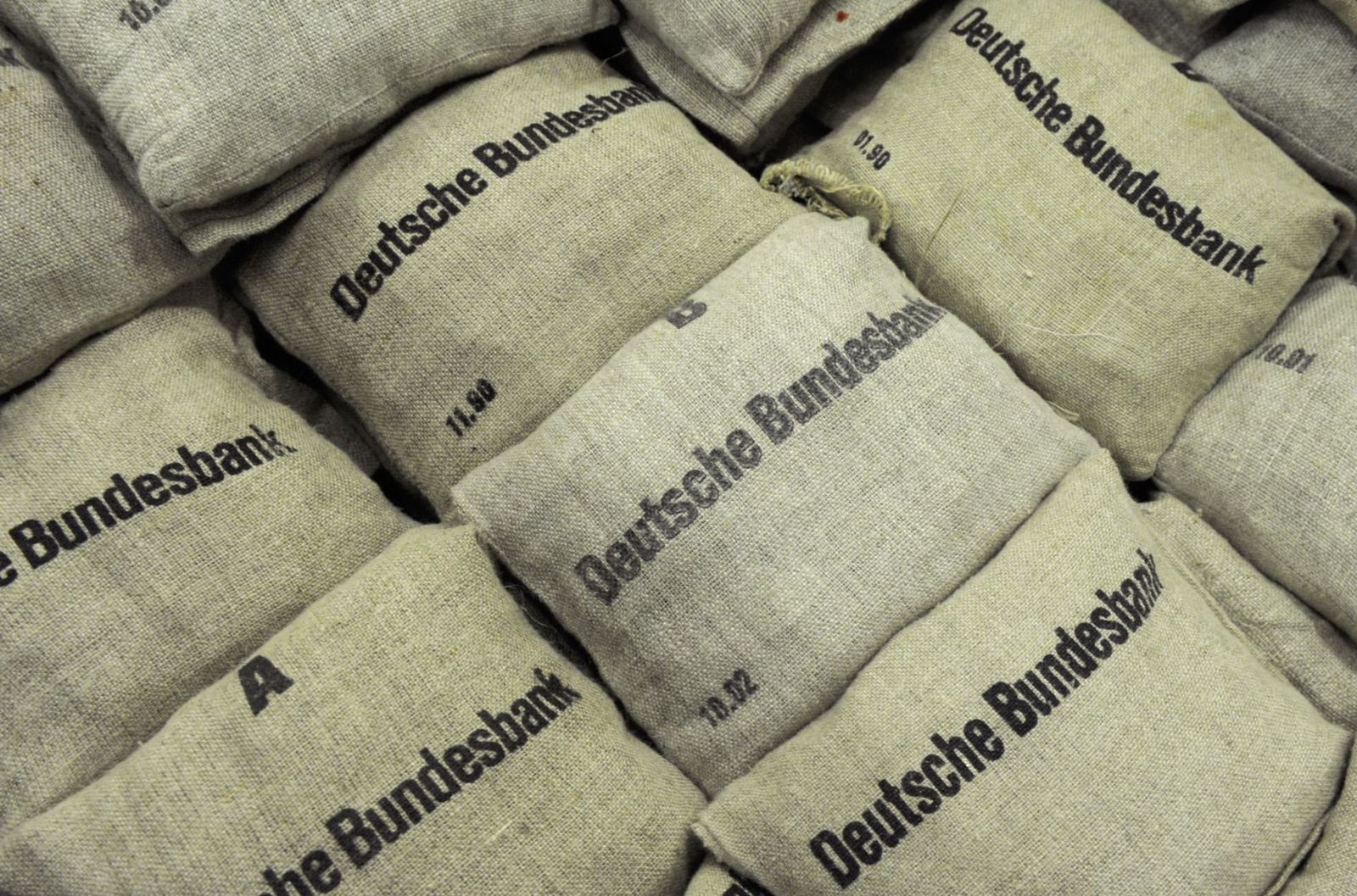 Germany's Bundesbank remains opposed to turning the European Central Bank into a lender of last resort.