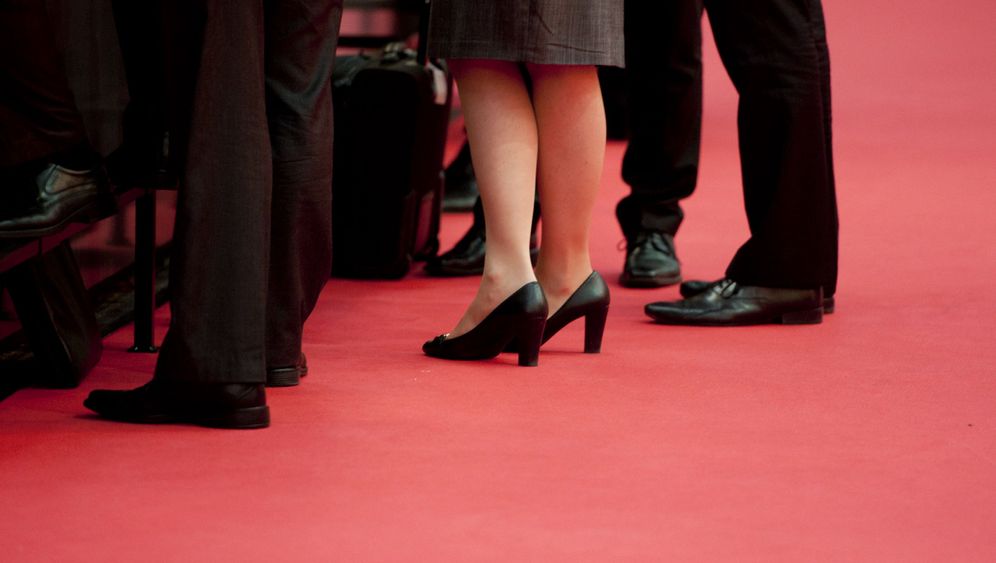 Photo Gallery: Their Place at the Table

Brigitte Lammers has been traveling a great deal lately. She's been crisscrossing Germany, stopping in Frankfurt, Munich, Düsseldorf and Hamburg, but also heading abroad. And all of these trips have the same purpose: Lammers is looking for women, as many and as talented as possible.

Lammers, 49, is head of the Berlin office of the headhunting firm Egon Zehnder International. Her clients include many major companies listed on Germany's blue-chip DAX index, all of which have the same problem: For years, they've put little effort into advancing the women within their ranks, and now they're trying to remedy the shortage of women in senior positions and on their boards.

In November, the European Commission approved a directive championed by European Justice Commissioner Viviane Reding stipulating that, by 2020, 40 percent of the seats on the non-executive boards of large, publicly traded companies should be held by women. With the directive and its serious sanctions now in place, German companies are realizing this is a serious matter -- and scrambling to hire a segment of the workforce that they used to care little about.

"We're experiencing a massive trend," Lammers says. "This is not a cautious trend, but one that has grown systematically stronger over the last 24 months. When it comes to supervisory board seats, in particular, companies are moving away from what were once there typical patterns for appointing board members."

More specifically, it used to be common for companies looking to fill seats on executive boards to scout for potential recruits on other executive boards, and the same held true for supervisory board seats. Likewise, since there were hardly any women on those boards already, vacant seats tended to be filled by more men.

To counteract this pattern, Lammers prefers to conduct her searches one level lower on the management hierarchy. Women who head a company's legal or compliance department, she says, are just as qualified as those who are partners in a management consultancy, as are women working as lawyers in the fields of regulatory or financial law. Women in all of these areas now have better chances than ever of rising to the highest management levels.

2013 will be an important year for elections to German supervisory boards, half of whose members must by law represent investors while the other half represents employees. Among companies listed on the DAX-30 index alone, 71 board seat mandates on the investor side of the table will expire this year (see graphic), which amounts to nearly a third of the total board seats allotted to stockholders. Many of these will simply be filled again by their current occupants, but quite a few will be newly assigned. "We will see a wave of female supervisory board members," predicts Wulf Bernotat, retired CEO of the German utility giant E.on.

Next week, the German engineering giant Siemens will hold its annual general meeting and elect its new supervisory board. On the investor side, it looks very probable that Nicola Leibinger-Kammüller, 53, a current board member who is also CEO of the engineering firm Trumpf, will be joined by another woman: Güler Sabanci, 57, the Turkish CEO and managing director of Sabanci Holding.

Meanwhile, Ann-Kristin Achleitner, 46, director of the Center for Entrepreneurial and Financial Studies at Munich Technical University, was nominated to the supervisory board of Munich Re in early January. The official election will take place when the German insurance giant holds its general meeting on April 25. This would make Achleitner the fifth woman on the 20-member board.

Achleitner is already a member of the supervisory boards of retailer Metro AG, energy provider GDF Suez and the Linde Group, a major gas and engineering company. In fact, at Linde, she is expected to be the next chair of that board. Achleitner is also involved in the government-appointed commission developing the German Corporate Governance Code. Her resume reads as though it covered the lives and careers of three people rather than just one. Indeed, although the former McKinsey consultant has never held a position of direct operational responsibility, there is hardly another woman in Germany with as much economic influence as Achleitner.

When asked if she feels powerful, Achleitner gives a succinct answer: "No. I feel like a woman with a career." Achleitner, who is married to Paul Achleitner, chair of the supervisory board at Deutsche Bank, decided on this new position at Munich Re because she felt she was most familiar with the business sector in question. "My strengths are in the areas of financial services and accounting," she says.

Using Strengths Rather Than Conforming

Still, the recent significant rise in the number of women in executive positions more likely results from considerable societal pressure and the fear of legal repercussions. In October 2011, only 42 women held seats on the investor side of the supervisory boards of the 160 companies listed on the DAX, MDAX, SDAX and TecDAX indexes. By October 2012, this figure had more than doubled.

At the same time, Lammers, the corporate headhunter, remains skeptical about how seriously these companies actually are about these changes. She says that many are "fixated on increasing their number of female executives without changing anything about their company culture." Women who want to succeed in a culture dominated by men, Lammers says, are generally able to do so only by over-conforming -- in other words, by giving up specifically female strengths and perspectives.

Lammers believes precisely the opposite is necessary. Women and international employees shouldn't simply be technically integrated into existing structures, she says. Rather, they should "use their nonconformity as an advantage instead of mutating into clones of the opinion leaders or the prevailing group within the company."

Ulrike Hinrichs is one woman who has achieved that goal. For the past two years, the 43-year-old has been managing director of the German Private Equity and Venture Capital Association (BVK), which represents a business sector generally dominated by men. At the organization's most recent "German Equity Conference," the industry's annual gathering, Hinrichs counted five women among 300 men.

Hinrichs began her career as a television journalist before becoming the spokeswoman for Horst Seehofer, the chairman of the center-right Christian Social Union (CSU), when he was Germany's consumer protection minister. She has taken a fairly unconventional approach to her new position managing the BVK, for example, by upgrading sub-divisions to the status of full divisions and preferring to promote female colleagues to be department heads.

She has also raised eyebrows within the organization for the company car she picked. Rather than choosing a luxury Mercedes sedan, a more typical selection for someone in her position, Hinrichs opted for a decidedly more modest Renault Laguna.

Hinrichs relates the story of a day, some time ago now, when she and the former BVK president had an appointment at the Ministry of Economics, in Berlin. The entire city was a gridlock of traffic, so Hinrichs simply settled her boss, decked out in a light blue helmet, on the back of her black scooter and drove him to the meeting at the ministry. Before they arrived, the president asked her to please stop a block away so he could go the rest of the way on foot. But Hinrichs ignored his request.

Still, what does it mean for men when companies' leadership positions are increasingly filled by women? Should they be worried that their own career prospects will diminish?

Monika Schulz-Strelow finds such concerns absurd. "Have men seen their career advancement over the last 40 or 50 years as discrimination against women?" she asks. Her question is not meant as a provocation, but rather as an expression of frustration.

Schulz-Strelow is president of Women on Supervisory Boards (FidAR), a Berlin-based association founded in 2006 by women holding executive positions in commerce, academia and politics. It aims to increase the proportion of women on the supervisory boards of German companies in both a significant and lasting way.

"Right now, there are many CEOs who are mostly just making bold statements about promoting women," Schulz-Strelow says. "But just as many have taken a top-down approach and are living up to what they say. Change comes from above, and only when subjected to pressure."

Indeed, something has really changed in the corporate world, and not only on supervisory boards. The number of women who hold positions of responsibility in operative business matters is growing as well.

Andrea Fuder, for example, now oversees purchasing for the truck maker Scania as a member of the VW subsidiary's executive board. Simone Menne, meanwhile, took up the reins as Lufthansa's CFO last summer, overseeing a division traditionally staffed by men. And Helga Jung joined the executive board at the Munich-based insurance giant Allianz. In addition to managing the company's transactions in Spain, Portugal and Latin America, she also overseas its strategic investments and acquisitions as well as legal and compliance matters. The press release announcing her appointment in 2011 as the first woman on the company's executive board said: "For all intents and purposes it's a routine announcement, and yet it marks a milestone in Allianz's 121-year history."

About Women or Diversity?

As a whole, the numbers in Germany still reflect only a modest change, especially when compared with the situations in countries such as Norway, which passed a law in 2005 stipulating that women must hold 40 percent of the seats on all corporate boards. In Germany, by contrast, only 13 companies in the DAX-30 have women on their executive boards.

Still, the general trend is clear. According to a study conducted by Egon Zehnder International, in mid-2012, 12.8 percent of board members in Germany were women. Two years previously, the figure was just 8.7 percent, making for an increase of 47 percent, which is well above the EU average. Between mid-2011 and mid-2012, 41 percent of all new executive positions in Germany were filled by women, a rate 10 percentage points higher than the average among Europe's largest companies.

Along with it making good political sense, there are plenty of other rational reasons for companies to increasingly fill executive-level positions with women. With the country's population shrinking, there will simply be fewer qualified professionals available in the future. Over half of all university graduates from European universities are women, and it would be a waste of talent not to consider them when making important staffing decisions.

But Daniela Weber-Rey considers such arguments to be less important. Rather than focusing on the interests of women and their supposedly different perspective, she prioritizes a company's interests. "I don't have a purely female point of view, but rather a professional one," she says. "But there are enough qualified women, outside the network of the DAX company boards as well, who would truly enrich supervisory boards."

Weber-Rey is a Frankfurt-based lawyer and partner at Clifford Chance, a globally active law firm that specializes in company acquisitions. She also holds a seat on the administrative board of BNP Paribas, France's largest bank. And, like Ann-Kristin Achleitner, she is a member of the German Corporate Governance Commission.

Achleitner agrees with Weber-Ray that the issue isn't just about women. "Supervisory boards without men would be just as unbalanced," she explains. "This is about diversity. We need academics represented as well as practitioners, international faces, men and women, too -- the whole spectrum."