As of Jan. 1, 2014, bankers' bonuses will be capped at 100 percent of their annual pay, or 200 percent with shareholder approval. The decision, reached in Brussels early Thursday morning by the European Parliament, the European Commission and the rotating Irish EU presidency, is likely to be approved next week. The regulation will apply to all bankers working within the EU, as well as employees of European bank subsidiaries abroad.

Although the regulation may not have a huge impact on normal banking executives, it could have a radical one on investment bankers, who work in a sector where it isn't unusual for bonuses to reach as high as ten times their annual salary. The center-left member of parliament leading the negotiations in Brussels, Udo Bullmann of Germany's Social Democrats, described the move as being no less than a "revolution" on the financial markets.

But in London, Europe's banking capital, criticism of the decision has been massive. "This is possibly the most deluded measure to come from Europe since Diocletian tried to fix the price of groceries across the Roman Empire," scoffed conservative London Mayor Boris Johnson, adding that Brussels cannot set pay for an entire sector "around the world." The move would only boost the United States and Asia as financial industry centers and further alienate Britain from the EU, he said.

So far, British Prime Minister David Cameron has been reserved in his remarks about the bonus cap, although he shares fears that the new rules will scare banks away from Britain. "We do have in the UK -- and not every other European country has this -- we have major international banks that are based in the UK but have branches and activities all over the world," he said. Cameron called for a regulation in Brussels that is "flexible enough to allow those banks to continue competing."

Britain is expected to try watering down the rules at a meeting of EU finance ministers next week. But London's room to maneuver is limited: A final decision on the issue will be made by a qualified majority vote and Britain will not have veto power.

German commentators on Friday are divided on the bonus cap regulation. Most agree that banking bonuses are out of balance, but some are also highly critical of such a far-reaching intervention on the free market.

"Conservative London Mayor Boris Johnson hit the nail on the head: With its decision to cap banker bonuses, the EU is shooting itself in the foot. The public may be pleased … but in practice, it will only lead to movement of the lucrative business of investment banking to other parts of the world, from New York to Singapore. In cases where that's not possible, salaries will simply be increased."

"The cap on bonuses is not just a shot in the foot, but also a serious blunder. Of course, the outrage is understandable that taxpayers have been required to support the sector both directly and indirectly with enormous sums of money, even as bankers continued to receive millions in bonuses. They seem to subscribe to the principle of socializing losses and privatizing profits. Still, the need for politicians and people to cool their anger is no excuse for this kind of large-scale incursion on the free markets. … That's not to say that reform isn't needed. It is true that bonuses based on short-term success have caused major damage because it wasn't in the recipient's interest to trim banks down for sustainable success. That's why it is the best interest of shareholders to correct these false incentives and to reform the bonus system. Of course, the situation is different if a country has to use tax money to prevent the collapse of an ailing financial institution. But then the state also becomes a shareholder."

"In a market economy, there needs to be a strong argument for this sort of intervention -- and in this case, there is. Banker bonuses led to high-risk dealings, with fast gains that soon turned into enormous losses. The bankers benefit, while the tax payers bailing out the banks lose. It's an example of market failure and calls for state intervention to protect the general public from further damage. A cap on banker bonuses is as justified as a minimum wage, whereby the state takes away companies' freedom to pay workers as little as €4 per hour. Caps on bonuses and minimum wages are an attempt to stop market economies from becoming distorted by those who want Europe to be ruled by the powerful."

"But the popularity of the cap harbors the danger that the political commitment to making the financial system more secure might ebb. The taxpayer had to rescue the banks, because their bankruptcy threatened to topple the entire economy. Speculators gambled with the guarantee that the general public serves as free insurance. The politicians need to remove the incentive to take risks. Half a decade after the financial crisis, they have yet to do this. Internationally, some banks are mightier than they were before the crisis -- and therefore even more dangerous for society."

"The alienation between the working class and the economic elite is bigger than ever. In Germany, too, many people have little understanding for the fact that a senior executive at a blue-chip company earns an average of 54 times what a normal employee makes. And most consider it completely crazy that Christian Bittar, an investment banker who worked for Deutsche Bank before being fired, earned as much as €80 million annually."

"How should policymakers react, though? Limiting manager salaries to a specific maximum misses the point. Any amount chosen would be arbitrary. Some would be satisfied if a top manager's annual salary were reduced from €6 million to €3 million, while others would still find that to be much too high. (Demands) for a ban on severance packages likewise make no sense. And the regulation passed this week by the European Parliament ... is also a mistake. Such a rule will first and foremost result in an increase in base salaries. State interference helps little."

"Despite the financial and euro crises, bankers are again enjoying fat bonuses. On Wall Street alone last year, $20 billion in bonuses were paid out. The European Parliament has now said 'enough is enough' to this insanity."

"It's a great success for members of the European Prliament, who had to prevail not only against London, but also against German Finance Minister Wolfgang Schäuble, who had long applied the brakes out of consideration for his British friends. The fact that he finally had to give in on the issue is attributable to German voters. Still, this agreement will not stop excessive salaries. In London, (bankers) are already looking for loopholes, for banks that are active internationally, for example. In addition, executives at hedge funds and private equity firms will be excluded. They can continue to bet against the euro and collect premiums."

"The new 'cap' changes nothing. Incompetent managers who gamble away billions are still stuffing their pockets with money. ... The limit to bonuses was hopefully just the beginning." 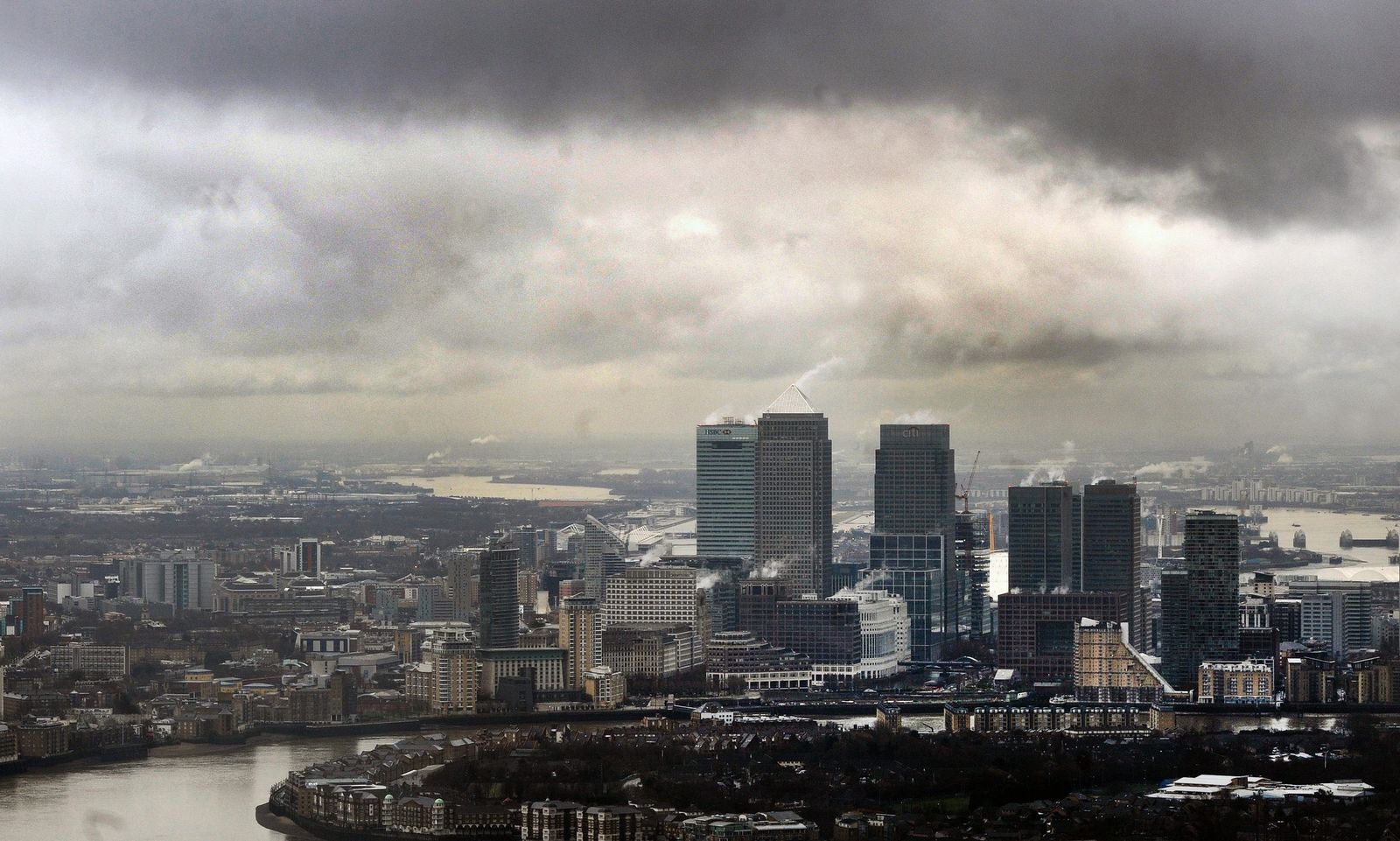 The financial district in London, where Mayor Boris Johnson called the cap a "deluded measure."