With recent advances in technology, visits by patients to Germany's well provisioned physical therapy centers may soon become a thing of the past. Instead, they may find themselves completing their therapy at home -- in front of their televisions.

The respected Fraunhofer Institute in Berlin has developed MyRehab, a form of physical therapy that enables patients to conduct their exercises at home. The system uses a special camera, a television and sensors built into a chest strap. An avatar leads the patient through the exercises and cameras and sensors monitor whether the patient has completed them correctly. The platform even makes it possible for a doctor or physical therapist to communicate with the patient using a live Internet video connection.

MyRehab is just one example of what many believe will be the next Internet revolution: the digitalization of healthcare. After smartphones transformed the ways in which we communicate, move and shop, medicine appears to be next.

Internet giants like Google are currently preparing to make large investments in the sector. In the United States alone, some $3.5 billion ($4.38 billion) is expected to be invested this year in healthcare-related start-ups. The market is no longer limited to gimmicky items like health wristbands or Bluetooth-connected tooth brushes. New applications are focusing on real medical care, from giving birth to treating cancer.

There are numerous examples in Germany of companies taking advantage of the surge in information technology, particularly the rapid proliferation of smartphones, to explore the opportunities in what many believe will become a fast-growing sector.

Thousands of health-related apps are already available on smartphones today. There are programs to measure blood pressure or to analyze a child's development. Some claim to be able to detect autism and one app called Clue even purports to be able to predict a woman's next period as well as her ovulation window for the sake of pregnancy planning. Another app can allegedly scan vacation photos for signs of a rare form of eye cancer.

A new era of online medicine is emerging, one that could provide a great deal of advantages to doctors and patients alike. But it is also likely to raise a number of important questions about which medical services can best be enhanced through digitalization. There are ethical issues, too, like who will be held liable if something goes wrong? Will the new digital services create greater transparency or will they just turn patients into data-obsessed hypochondriacs? And perhaps most pressing, will patients be required to pay for the online offerings themselves or will health insurance companies pick up at least part of the tab?

One thing is certain: Smartphone medicine is going to transform the relationship between doctors and patients.

Take the example of Klara, an app for skin conditions that operates under a simple premise. The patient takes two smartphone photos of the rash or liver spot in question, uploads them and answers a few questions. Within two days, patients receive a response, either a tentative diagnosis or even a warning from a doctor that, for example, skin cancer is a possibility and the patient should consult a physician within two weeks' time. The app has already been downloaded around 135,000 times, at a cost of €29.

Simon Bolz, a developer for the Berlin-based start-up, says that the company has succeeded in reviewing around 98 percent of all photos sent in. Currently, Munich's Technical University is also reviewing the reliability of the diagnoses provided. The company believes that a large share of its revenues in the future will come from customers outside of Germany. Already today, around 20 percent of requests have come from abroad. For its services, Klara takes a cut of a little less than 50 percent, with the slightly larger half going to dermatologists working with the company. Thus far, health insurers in Germany are not reimbursing their customers for using the Klara service.

When asked if he thinks algorithms will one day be able to replace doctors in diagnosing patients, Bolz says he doesn't know. Instead he prefers to discuss how much more comfortable the actual work of providing medicine will become in the future. "Soon, doctors might even be able to telecommute from home two days a week using a tablet," he says.

First, though, medical professionals will have to work through some prickly ethical issues. Currently, professional guidelines stipulate that doctors cannot act exclusively through "print or communications media," meaning virtual care may not replace a physical visit to a doctor. Klara skirts this problem by using vague language and describing a diagnosis as a "medical opinion".

Franz-Joseph Bartmann, a surgeon with the Chamber of Physicians in the northern German city of Flensburg, says his organization views businesses like this "openly, but critically." He doesn't see any need at the moment to take action to stop the companies from providing virtual medical services. Given that there are plenty of qualified doctors to go around, he believes few people are going to "give up personal contact with their doctor in favor of a smartphone."

Still, a new generation of patients is emerging. Blogs about specific illnesses, X-rays posted to Instagram, Facebook groups dedicated to medical conditions: All of that has long since become commonplace. Furthermore, a large percentage of doctors have stated in polls that they have sought information about certain diagnoses on the Internet. Some say it has even prevented them from making mistakes. Patients too seek medical advice on the Web.

In response, start-ups like the Lübeck firm Patientus want to give doctors an office in cyberspace. Patientus provides an application that looks like Skype but can do considerably more. Company founder Nicolas Schulwitz originally wanted to become a doctor but ultimately wound up working for a health insurance company. He found it surprising that there was no video conferencing system in existence that was tailored specifically to healthcare professionals. He began developing one in 2011.

"With our service, the doctor pays for his ability to use the Web presence," says Schulwitz, adding that access to the platform costs medical professionals around €100 per month. He says that it is particularly helpful for acquiring new patients. "You could also pick up the phone, but being able to see each other is completely different," he says. The platform even includes a virtual waiting room that patients must visit before their consultation. The Patientus platform also can be used for check-ups, thus saving the patient time and the hassle of driving to the doctor's office. It also allows doctors to hold office hours from any location.

One Berlin start-up is working on an even wider-ranging service by providing a virtual personal physician who is available 24 hours a day, seven days a week.

Should the model become popular, algorithms could soon at least partially replace a doctor's assessment. An app called OneLife, for example, arose directly out of the delivery room. Developers learned from clinics that expecting mothers often ask about the availability of WIFI when choosing the hospital where they would like to give birth. "A generation is coming that doesn't even want to set aside their mobile phones while giving birth," says OneLife founder David Schärf.

When Berlin-based OneLife launches in December, its product will initially be little more than a digital pregnancy journal into which a mother-to-be can enter observations she deems pertinent, from mood swings to pain levels. There is also room for 3-D ultrasound scans, which can then, of course, be shared with friends. The app also provides suggestions, for example that smoking husbands try to quit. But the main attraction is that the course of the pregnancy can be searched for certain patterns, perhaps enabling the prognostication of potential complications. Should one be found, the app will be able to send warnings to users. Should, for example, a patient note that she is experiencing bleeding, the app will urge her to see her doctor right away due to the danger of a premature birth.

Ultimately, Schärf would like to see OneLife expand into a kind of life-long medical service, with checkups, blood tests, operation details and allergies being saved in the -- presumably secure -- cloud. This data will enable the recognition of patterns. As an extra, diagnoses and findings will be explained in language comprehensible to lay people. "We began with the issue of pregnancy because it is one that is fundamentally positive. But why shouldn't a cancer patient also be able to use this kind of app?" says Schärf.

Analyzing large quantities of data has long since become something of a trend in medicine. The IBM super-computer Watson is able to search through 200 million pages of scholarly papers within three seconds on the search for information relevant to specific patients. "Thanks to computer capabilities like this, it will be possible in the near future to offer treatments to only those patients who will genuinely benefit from them and to protect others from the serious side-effects that such invasive therapies sometimes produce," says Chamber of Physicians official Bartmann.

But will it really make patients healthier to have a smartphone continuously collect data and monitor a person's health? Giovanni Maio, doctor and medical ethicist at the University of Freiburg, is skeptical. Data that is essentially collected at random is often only of limited use, he points out. "A good doctor collects a small amount of data, but the correct data," Maio says.

Fitness wristbands and smart watches that can count steps, measure heart rate and determine the amount of calories burned are relatively useless from a medical perspective. But the smartphones of today can already do much more than that -- at an affordable price. They can monitor glucose levels, for example. With the addition of a small clip, they can act as pulse oximeters, measuring the blood's oxygen content. A small, matchbox-sized attachment can even perform EKGs.

"Anyone suffering from heart disease gets extremely worried at even the slightest irregularity. But you also don't want to be calling the ambulance all the time either," says Jens Beermann, a cardiologist near Hamburg and the founder of Cardiogo. For a membership fee of €1,975 per year, patients receive a mini EKG device that can be carried in the pocket of one's pants. No matter where patients are in the world, they can perform a quick test as needed and send the results to a cardiologist.

Doctors on the other end can quickly access the patient's records and analyze the incoming EKG before calling the patient and explaining their findings. If needed, they can also provide necessary patient information to medical personnel on site. Two such calls per year are included in the subscription, with subsequent calls costing €95 each.

Markus Müschenich is something of a thought leader in the German medical start-up branch. A pediatrician by training, he used to be a managing board member at Sana, a corporation that operates dozens of hospitals across Germany. He has since founded an association that is intended to support the application of digital technologies to healthcare.

"I have no doubt that good medical practice in the future will involve the Internet," he says. Online services, he adds, may make many elements of healthcare cheaper and they could offer the last resort for places where healthcare is unavailable. But he also sees another reason why the trend toward digital medicine is unstoppable.

"Patients want it," he says. 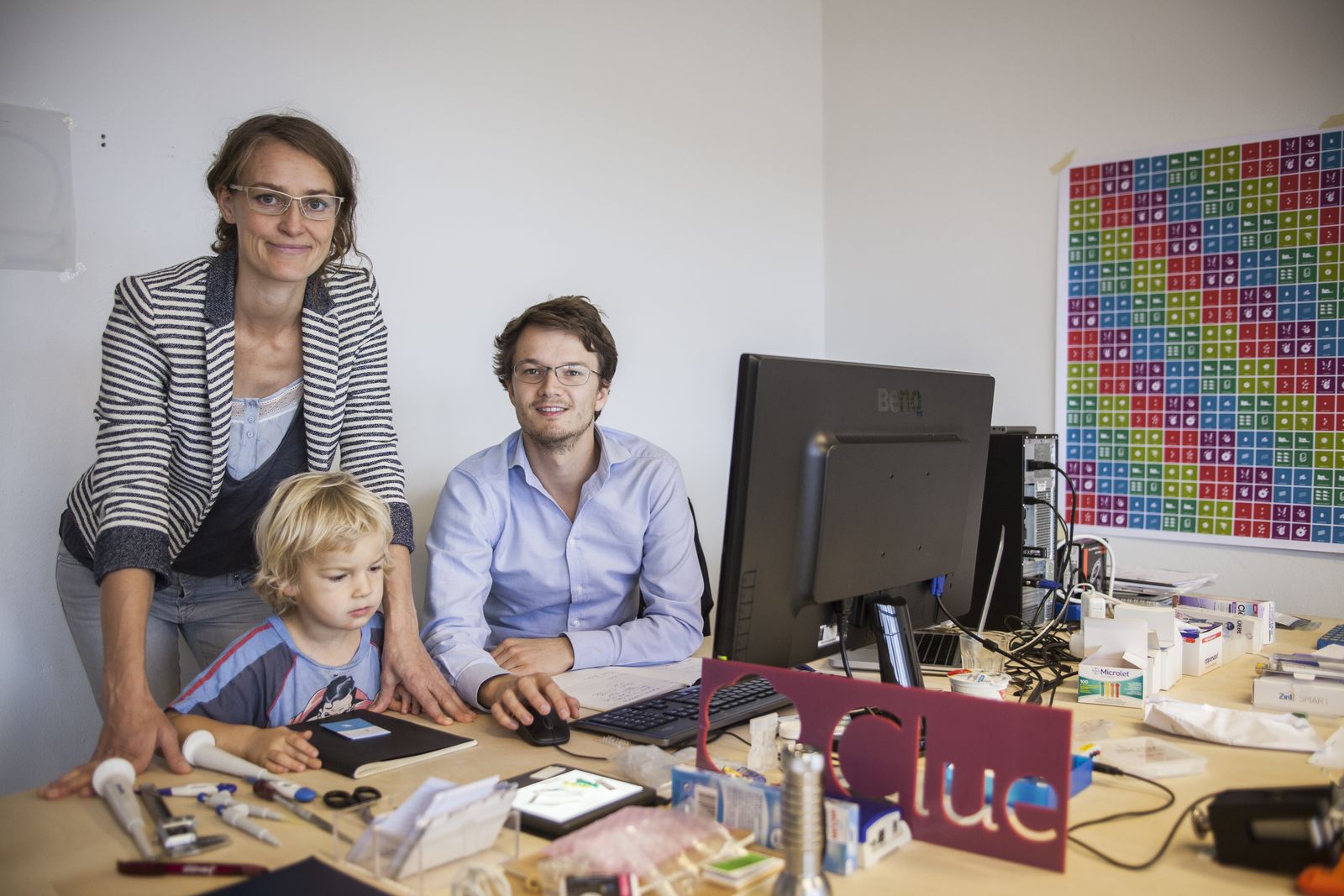 Ida Tin and Hans Raffauf developed the Clue app, which can predict menstrual cycles and help with family planning.