Donald Trump is not a fan of extensive debate. "I like bullets or I like as little as possible," the U.S. president said shortly before his inauguration. "I don't need, you know, 200-page reports on something that can be handled on a page. That I can tell you."

A new paper from the German Finance Ministry and Economics Ministry, obtained by DER SPIEGEL, accommodates the president's preferences. It's just seven pages long and lists out 29 points on an issue that could fill entire books: Germany's trade surplus.

The fact that Germany exports far more goods and capital than it imports from abroad has long been a source of international criticism. But Berlin has only really become alarmed by the disapproval since Trump joined the ranks of those critics. Before moving into the White House, he said, for example, that it was "very unfair" that Germans buy few Chevrolets while New York is filled with Mercedes automobiles. He also threatened German carmakers with massive punitive tariffs.

The Finance Ministry is expecting to hear the accusations again this week at the spring meetings of the International Monetary Fund and the World Bank in Washington. German Finance Minister Wolfgang Schäuble will have the new paper in his luggage when he flies to the U.S. capital Wednesday evening. The document is designed to help Finance Ministry and Economy Ministry staff assuage the Trump administration's concerns. Significant portions of the document read like an introduction to the fundamentals of economic policy.

Germany, the authors instruct the Americans, does not see the current accounts balance as a so-called key control parameter because it can only be controlled by political policy in extremely limited areas. "The German trade surplus is primarily the result of market-based supply and demand decisions made by companies and private consumers in the global marketplace."

Around half of the surplus, the paper notes, can be traced to structural factors that policy cannot change in the short term. One of those factors elucidated is "the high competitiveness of German vendors on the global markets," but also the high quality and complexity of Germany's industrial products. In other words, Germany produces and exports goods that are in demand elsewhere in the world and which no other country offers.

The paper also emphasizes that Germany's account balance surplus has already reached its zenith. In 2015, it was 8.6 percent of gross national product (GDP) while in 2016, it sank to 8.3 percent. "Current forecasts assume a further surplus drop to 7.5 percent in this year and to 7 percent next year," the paper notes.

The document likewise claims that Germany's high foreign asset holdings are an inalterable contributor to the high surpluses. It resulted from elevated levels of capital exports, with German companies and private citizens investing much more money abroad than domestically to take advantage of new markets and to generate higher returns. These foreign assets produced profits that increased the country's current accounts surplus. Indeed, according to the paper's authors, this effect accounts for a quarter of the surplus.

The paper further argues that the U.S. is one of the primary beneficiaries of German capital exports. "German investors are among the largest foreign employers in the U.S.," the document reads. They hold a stake in more than 3,000 American companies which employ around 672,000 people and account for a total turnover of 466 billion euros, according to the paper. In 2016 alone, $63 billion in German capital flowed into the U.S., the document claims. In the years up to 2015, German companies invested around $319 billion in the U.S., making the country the third largest direct foreign investor in the U.S.

"America's extreme attractiveness to foreign portfolio investments is a product of its economic and political importance to the global economy in addition to the role of the U.S. dollar as the leading international currency," the paper's authors stress. In other words, for as long as the U.S. plays the role of global power, it will attract foreign capital, which likewise means that it will import more goods than it will export.

Trade imbalances of the kind the new U.S. administration is constantly lamenting, the German government experts reassure, aren't a bad thing. Rather, they are "normal in an open economy." Indeed, "they are the expression of diverse comparative advantages held by different national economies and their associated specialties." Each country does what it can do best.

Another cause for the comparatively high volume of savings that Germans hold abroad, the paper claims, is retirement provisions. "Various estimates assume that between one and three percentage points of the current account balance is caused by demographic factors," the paper reads. That means that the more Germans reach retirement age, the more they will begin to tap into their savings and the German current account surplus will fall as a result.

The authors of the paper do not dispute that the extreme imbalance could "justify economic policy intervention." But Schäuble and Zypries believe that Germany has already taken significant steps to reduce the surplus. One example listed in the paper is the minimum wage that was introduced in 2015 and was increased at the start of 2017. During the same period, tax cuts worth 11 billion euros have been introduced. "These measures increase domestic demand."

Plus, the government has increased public investment by 45 percent and introduced measures to increase private investment. "The current rate of investment is likely to increase slightly this year from 20 to 20.2 percent in relation to gross domestic product."

The paper also vehemently rejects accusations from the U.S. that Germany is using unfair measures to create an advantage. "Germany has no influence on the exchange rate and applies no protectionist measures," the paper notes. EU member states and the European Commission, the document instructs, have no influence on the monetary policy pursued by the European Central Bank.

'A Degree of Certainty'

Such sentences make it clear that Germany is worried that the U.S. could accuse it of currency manipulation. Trump has already indicated that he would do so in the case of China, before surprisingly pulling a step back last week. The most recent currency report by the U.S. Treasury Department likewise makes no accusations of manipulation, which the German Finance Ministry has noted with relief. The formulation used in the Treasury report, according to a senior German official, is very similar to that used before Trump's presidency, which speaks to "a certain degree of continuity."

From a global perspective, the German paper sums up, the country's current account surplus is not particularly meaningful. In the global comparison, the eurozone's trade balance with the rest of the world is decisive. "California's trade balance with China is just as insignificant in the debate as Germany's with the U.S. should be."

Whether such comparisons will truly convince Trump's people is unclear. The comparison with California is one that Wolfgang Schäuble already jokingly made in mid-March in his initial meeting with U.S. Treasury Secretary Steven Mnuchin. The American, however, did not look amused. 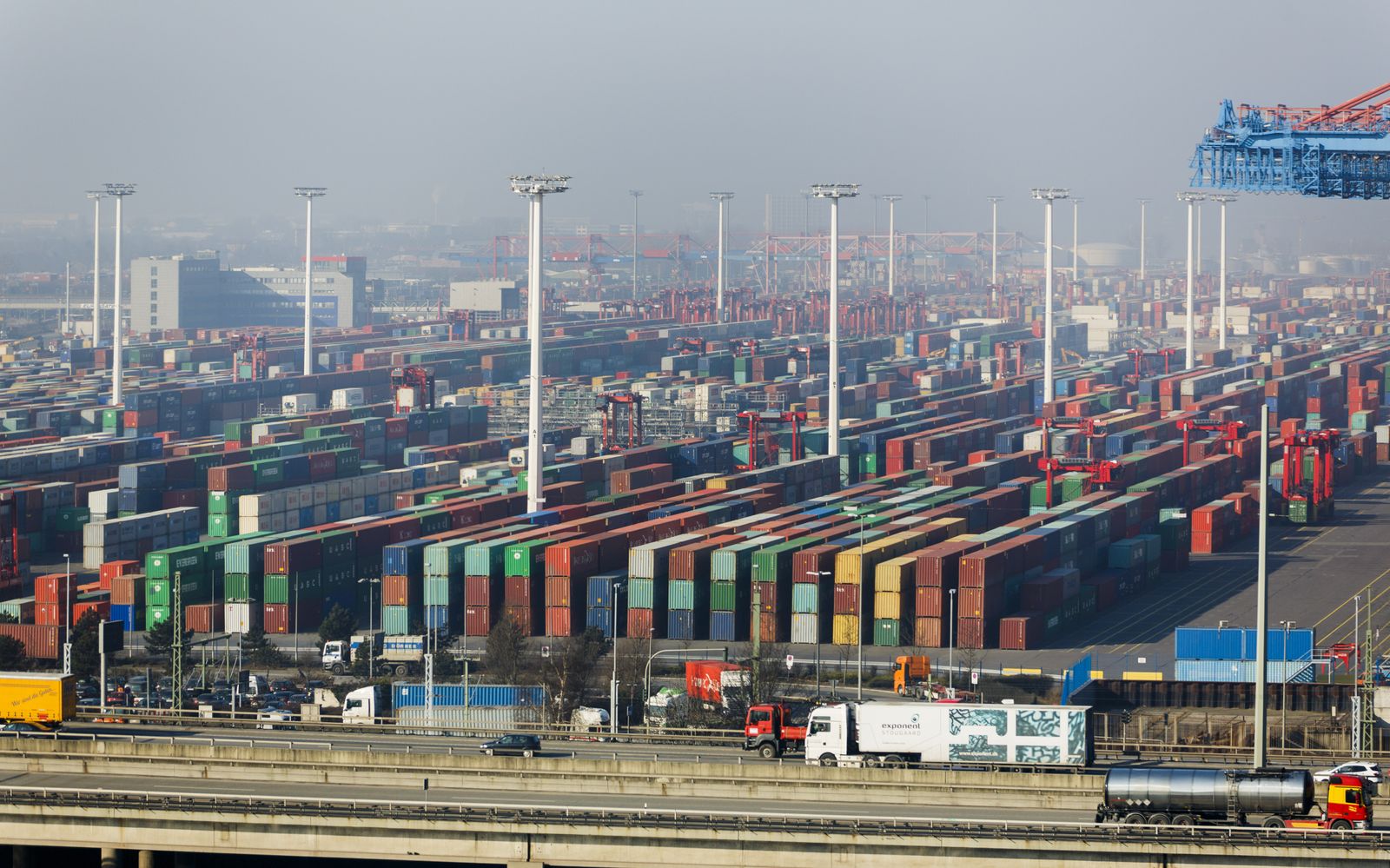 Containers in the port of Hamburg