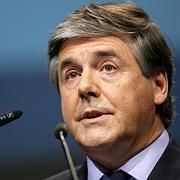 Ackermann "no longer believes" in the natural healing power of financial markets.

The head of Germany's leading Deutsche Bank, Josef Ackermann, said the world financial crisis currently unfolding would need strong and organized government intervention to stop further bleeding in financial institutions. Simple market corrections, he said, won't do the trick. "I no longer believe in the market's self-healing power," he told an audience in Frankfurt on Monday. "Making liquidity available isn't the cure-all."

He held up the recent rescue of Bear Stearns in America, as well as the US Federal Reserve's swift response to the credit crisis, as examples of good government intervention. "We need concerted action by governments, central banks and market participants to help stop this wave," he said.

A run on Bear Stearns last week brought Wall Street's fifth-largest investment and securities firm to its knees, but with Federal Reserve help JPMorgan Chase & Co. agreed to buy the venerable bank for $240 million, or 10 percent of its market value a week before. The Fed also lowered the rate on direct loans to banks over the weekend in a rare emergency meeting, hoping to prevent a broader market panic.

But Ackermann said simple rate cuts wouldn't be enough. The reason for the global crisis, he argued, was nervousness in the markets, not the availability of money. "There is not a liquidity bottleneck, but an investors' strike," he said. In his opinion the finance markets were in the middle of a "radical correction" after a speculation bubble; and the subprime crisis in the American real-estate market was playing a key role. He also suggested an international financial watchdog should be created -- a sort of global "council of wise men" that could warn markets of speculation bubbles in the future. "Globally operating banks need globally operating oversight agencies," he said.

Deutsche Bank's chief economist, Norbert Walter, echoed Achermann's remarks on a TV news program on Monday. He said the financial crisis would not be over soon. "The turbulence won't be over before the end of 2009," he said. "We need a new order and a new way of thinking in regulating the finance markets."

Separately, German Finance Minister Peer Steinbrück told an audience in Potsdam on Tuesday that close collaboration between financial players and government agencies would be necessary to survive the crisis. "In Germany we rely on maintaining a healthy cooperation between government, the German Central Bank, the respective banking alliances and banking institutions so we can minimize repercussions," he said.

He said he was pleased that the Fed had moved over the weekend to prevent panic, and added that Germany's economy was better poised than America's to weather the crisis.

The Fed was widely expected to move again on Tuesday by cutting its prime interest rate by a full percentage point.