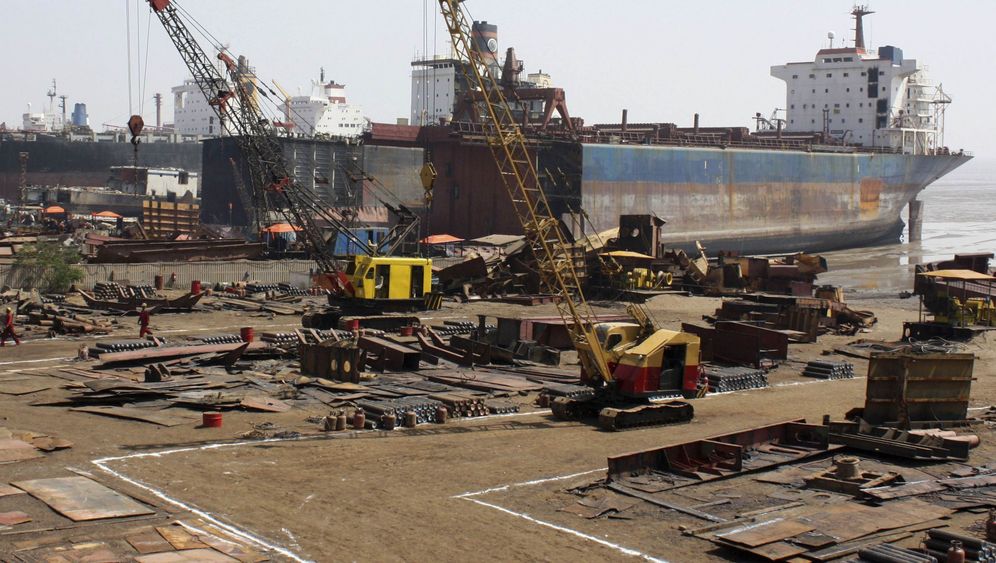 The skeletal remains of the former Exxon Valdez lie on the beach of the Indian coastal city of Alang. Only a few meters of the black-and-red steel wall are left, and the bow is already gone. Like ants devouring a dead animal, shipyard workers use blowtorches to cut apart the 34,000-ton steel giant.

In about two more weeks, there will be nothing left of the former oil tanker, which in 1989 was responsible for the largest oil spill ever in the United States, leaking more than 41 million liters (10.8 million gallons) of crude oil into Alaska's Prince William Sound. After the accident, the Exxon Valdez was converted into an ore carrier, and it was most recently renamed the Oriental N. Priya Blue, an Indian scrapping and salvage company, bought the freighter last spring for $16 million (€11.9 million), solely for the purpose of scrapping it.

On Aug. 2, the ship was grounded at high tide on the beach at Alang. There, at the world's largest graveyard for ships, more than 300 workers are being paid a few rupees a day to dismantle the vessel.

There was a great outcry when it was revealed that Alang was to be the notorious ship's final resting place. Although it does not contain more toxic materials than other ships, environmentalists took advantage of the former tanker's prominence to file a lawsuit at India's Supreme Court to block its import. It was unsuccessful.

But the trial brought to light, once again, the catastrophic conditions at many low-wage shipyards in South Asia, where old ships are being scrapped and gutted. In October, six workers died in a fire in Alang as they were dismantling the oil tanker Union Brave on the beach. One of the workers had struck a pipe that still contained oil with his blowtorch.

In Pakistan, more than 20 shipyard workers died and more than 150 were injured in 2011. And in Alang alone, 173 workers have died in more than 170 shipyards since 2001, killed by falling steel parts or burned to death in explosions. Workers are sometimes barefoot as they climb over the ships, and toxic waste is often incinerated on the beach.

Business is booming for the "iron eaters," as the scrappers are called, and not just in India. The ongoing global shipping crisis has forced fleet owners to downsize as older ships become unprofitable. A record number of more than 1,000 ships were scrapped worldwide in 2012. India accounted for the largest number, 527, followed by Bangladesh, Pakistan and China. The expensive steel giants are sometimes taken out of circulation after only 15 years.

European ship owners also prefer to dump their defunct ships in South Asia, where there are few environmental and occupational safety regulations, but where steel is all the more valuable. The scrapping companies pay about $400 per ton for ships. The high-quality steel used to make the vessels is in great demand as a resource. Recycling ships currently satisfies 9 percent of India's demand for steel.

The 6-kilometer road to the world's largest ship graveyard is like a giant bazaar. Pots, beds, TV sets -- everything that crews of the scrapped ships once used on board -- are stacked up. The items that can't be sold, including old batteries and half-empty cans of paint, are simply burned. The air is filled with acrid smoke, made even worse by fumes from the trucks that thunder past, loaded with steel sections from the disassembled ships.

A sign at the end of the road indicates that visitors have arrived at the "Alang Sosiya Ship Recycling Yard." For journalists, the trip ends at a police checkpoint. Since the press began reporting on pollution and slave-like working conditions in the 1990s, the state government of Gujarat has tried to suppress negative news stories. After the recent accident on the Union Brave, squad cars began patrolling in the adjacent cotton fields to prevent bystanders from climbing the high wall that seals off the beach.

Given the shipyard's seclusion, a meeting with Chetan Patel must take place elsewhere, in a nearby hotel. Patel runs Shree Ram, one of the largest scrapping operations at the site. He is among the bosses who have become rich and are now trying to change Alang's grungy image, in part by pushing for better working conditions.

'Some Sort of Certificate'

Asbestos is properly handled in his company, says Patel. Machine oil is drained into special tanks and radioactive material, such as that found in smoke detectors, is safely disposed of. Verifying his claims is impossible.

Japanese investors recently proposed that fixed docks be built in Alang, says Patel, so as to put an end to the controversial disassembly on the beach. Existing regulations, however, preclude such a move. Leases from the government on the beach parcels used by Patel and his neighbors only run for six months before they must be renewed. "Under such circumstances, what businessman would be willing to invest in new facilities?" Patel asks.

His shipyard has a "green pass," which confirms compliance with ISO environmental standards. Other businesses in Alang are also switching to more environmentally friendly methods says Patel, adding that there is a growing awareness of the need to do so. Nevertheless, there is still no valid international standard specifically for the scrapping industry.

"Among all the recyclers in Alang, probably one in two can present some sort of certificate," says Gerd Leopold. From his office in Winsen an der Luhe, near Hamburg, Leopold buys freighters and tankers for the Indian ship recycler and dealer Priya Blue. He also handled the purchase of the former Exxon Valdez. Priya Blue is one of the "leading green recyclers" in Alang, says Leopold. But for ship owners who are seriously interested in environmental protection and safety, he adds, documents are not enough to silence their conscience. Instead, they either visit the shipyards in person or hire experts to do so.

One of them is environmental engineer Henning Gramann. He tests ships for pollutants on behalf of ship owners and shipyards. Scandinavian owners, in particular, are increasingly willing to pay for clean disposal, he says, but this doesn't apply to the bulk of the industry. "Many ship owners have financial problems, so that voluntary environmental protection isn't exactly at the top of their list," Gramann says.

From the High Seas to the Scrapyard

The established scrapping practice has been illegal on paper for a long time. Because asbestos, PCBs, residual oil and heavy metals can almost always be found on board, the Basel Convention treats ships like toxic waste: Exports to countries that are not members of the Organization for Economic Cooperation and Development (OECD) are banned. Ship owners who want to send their ships to a country like India to be dismantled would have to obtain the permission of authorities and ensure that all toxic materials had been removed. But, says Gramann, "this isn't even possible, because a ship can't move without fuel and lubricants."

But in practice, the Basel Convention is useless because it is unenforceable. When the decision to scrap a ship is made at sea, beyond national territorial waters, the Basel Convention has no jurisdiction -- meaning that most ships begin the journey to their final resting place from the middle of the ocean. The Hong Kong Convention was intended to remedy the problem. It permits the export of ships for recycling, but only if certain requirements are met: Each ship must have a list of hazardous substances on board and each shipyard must prepare a recycling plan to prevent the decommissioned ships from being indiscriminately ripped apart. The Hong Kong Convention was adopted in 2009 -- but no country has ratified it to date.

For this reason, in March 2012 the European Commission proposed its own, more stringent regulations to force ship owners and shipyards to take responsibility. Under these rules, ships sailing under European flags can only be disposed of in shipyards that have made it onto an EU "green list." The scrapping yards would have to provide evidence of the presence of wharfs or docks, as well as hazardous waste disposal facilities. Compliance monitoring would not be left up to local authorities, but instead would be handled by international inspectors working for the EU.

The ship owners' lobby is protesting the proposed European regulations, which have also triggered resentment in countries where scrapping businesses are located, especially China. The country sees itself as a pioneer of "green" recycling. China hopes that once the Hong Kong Convention comes into effect, it will have a head start over low-cost competition.

Fighting for Every Ship

The Chinese, already the world's largest shipbuilders, are now vigorously establishing scrapping operations. But one-sided EU requirements "I will not accept, our country will not accept," says Xie Dehua, president of the Chinese scrapping association. After all, he notes, Europe wants to get rid of its scrap. That, though, is only part of the truth. China's scrappers need the out-of-commission ships badly. They have invested a lot of money in new facilities and, now that the price of steel in the country is falling, they have to fight for every ship.

Yang Guiwang is head of the Tianjin-Tianma shipyard. The state-owned business recently moved to the shore of the Yellow Sea, where there is more space and there are longer piers and bigger cranes. Within three months, an industrial wasteland had been converted into a finished shipyard.

Four rusting ocean giants are now docked at the pier. One of them, the Direktor, built in Germany in 1982, has been largely gutted. A floating plastic ring encircles the hull to prevent oil leakage. The sorted remains of the refrigerated cargo ship are laid out on six concrete rectangles the size of soccer fields: pieces of steel, engine parts and scrap metal. The workers wear helmets. When toxic materials or asbestos are disposed of, says Yang, the workers put on protective suits and gas masks.

But Yang has a problem: He can't compete with India and its lower wages. "A friend of mine is a Chinese ship owner," he says. "I spent weeks negotiating for one of his ships. In the end, I offered him $352 per ton, but the Indians offered $357. I lost out."