First came the drums. Then other celebratory sounds rang through the factory halls as a shiny silver autobody hovered over the honorary guests gathered below. Russian Prime Minister Vladimir Putin looked devoutly at the VW assembly line, along with Czech Foreign Minister Jan Kohout and Russia's ambassador to Berlin, Vladimir Kotenev.

Putin, who generally cultivates his preference for classic Soviet automobiles in public, stepped up to the microphone. He praised "a true day of celebration." Putin flew by helicopter 200 kilometers (124 miles) south of Moscow to the city of Kaluga to pay his respects to Germany's Volkswagen and its newly expanded operation in the country.

The carmaker, already No. 1 in Europe and No. 3 globally, is celebrating the start of its "full production" in Russia. The plant opened in 2007, but up until Tuesday it was only used to partially assemble components from abroad. Now the factory is home to the entire manufacturing chain.

"Today we are already No. 3 on the Russian market," fulminated VW CEO Martin Winterkorn. "But that's not good enough for us."

Volkswagen wants to produce 150,000 automobiles each year on Kaluga's assembly line, and the company has invested €570 million ($852 million) to create the highly modern plant. By next year, 3,000 workers are expected to be employed at the 400 hectare (988 acre) plant -- and future expansion hasn't been ruled out. Workers at the plant will mostly produce vehicles from the company's VW and Skoda lines -- and Volkswagen is hoping to use the factory as a beachhead from which it can finally conquer the Russian market.

Until recently, Volkswagen found itself lagging behind its competitors in the Russian market. Korea's Hyundai and Japan's Toyota already have Russian plants in operation, and Ford opened its own factory in St. Petersburg back in 2002. And while each of the large competitors succeeded in selling around 200,000 cars last year, Skoda and VW each had turnover of a relatively paltry 50,000.

It's a situation that already appears to be changing. Despite the global economic crisis, the VW group claims it sold 72,000 vehicles in Russia during the first nine months of this year -- more than doubling it's share from 3.2 to 6.6 percent in an otherwise collapsing market.

In recent months, the company has made considerable efforts to court the Russians. VW is providing 3,000 vehicles for use at the 2014 Winter Olympics in Sochi -- and in September it announced it would become one of the Games' official sponsors. Since spring, VW has also been the main sponsor of Russia's national soccer team.

Going for Russian Hearts and Pocketbooks

During a decisive qualifying match for the 2010 World Cup between Germany and Russia in early October, the company left no mystery about which team it supported. Volkswagen plastered posters all over Moscow reading: "We support Russia on October 10."

In Kaluga, too, VW is attempting to position itself as a domestic carmaker. As Putin prepared to take the stage, the company flashed an promotional film that showed images alternating between the golden cupolas of Orthodox churches, birch groves and Russian beauties and the German company's latest achievements.

Volkswagen has long viewed Russia as a country filled with promise. Before getting halted in its tracks by the global economic crisis, Russia was soaring -- well on its way to overtaking Germany as Europe's largest market for automobiles. Despite its severity, the crash did little to dampen great expectations for the Russian market. The German government and workers at Germany's Opel plants are even hoping that the Russian market might be enough to rescue the carmaker. Opel, currently a subsidiary of General Motors, is soon expected to be sold to a consortium that includes Austro-Canadian auto parts supplier Magna, Russia's Sberbank and Russian automobile manufacturer Gaz. With the help of its Russian partner in Moscow and other parts of the country, strategists back in Germany are hoping that the "New Opel" will soon be able to sell 700,000 cars a year in Russia. Volkswagen also has ambitious targets in the east: Next year the company hopes to sell 300,000 vehicles in Russia.

Automobile industry experts back in Germany view Opel's target as pure fantasy, but VW has a good chance of fulfilling its ambitious goal.

"VW offers extra low-priced models for emerging economies like Russia. By manufacturing directly in Russia, import tariffs, which bump up prices, will also be removed," said Dmitry Sharovatov, a consultant at Simon Kucher & Partners in Moscow. Of course disruptions caused by delays in customs clearance will persist. "But we are also seeing the development of a network of suppliers surrounding the plant in Kaluga," Sharovatov said.

"We simply have the best value for money. And people like the good quality we deliver," said VW sales director Detlef Wittig, who said he was pleased the Putin had expressed so much interest in the new plant. "He even got the fact that we aren't just talking about technology transfer here," he said. "We are also actively doing something to help modernize the Russian economy."

In the end, the powerful Russian government chief stayed longer at the plant's opening party that planned. He casually posed for photographers next to a VW Tiguan sport utility vehicle, saying how pleased he was by the domestic production. Volkswagen officials from the company's headquarters in Wolfsburg, Germany, also appeared to have found a Russian part of their souls. "As of today," VW CEO Winterkorn said, "we consider ourselves to be a domestic manufacturer in Russia." 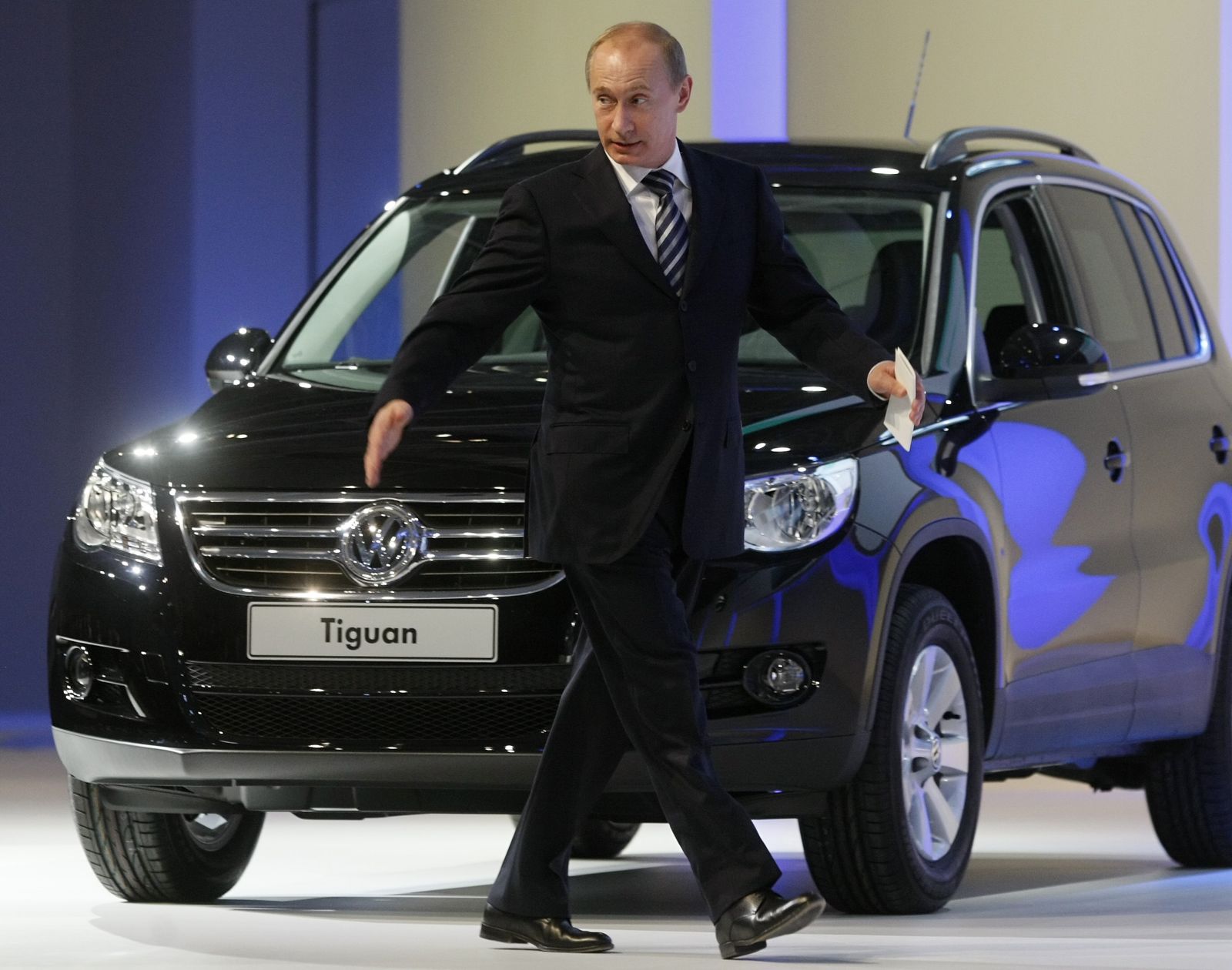 Russian Prime Minister Vladimir Putin walks in front of Volkswagen Tiguan at the opening ceremony of the VW assembly plant in Kaluga, Russia.