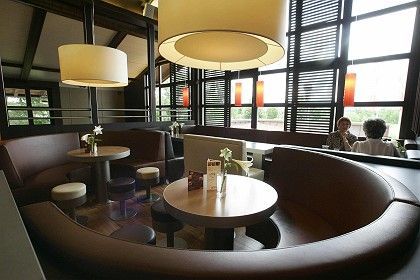 A McDonald's near Munich: The 1970s-style interiors have given way to more elegant spaces.

Three years ago, Denis Hennequin was faced with the supersized task of turning around the lackluster growth of McDonald's Europe. The Frenchman -- the first non-American president of the fast-food chain's European operations -- embarked on a massive McMakeover of more than one-third of the Oak Brook company's 6,400 European outlets. And voilà, today McDonald's Europe is sizzling. "The European business is growing much faster than the US," says Steve West, restaurant analyst with St. Louis brokerage Stifel Nicolaus.

Europe is now McDonald's largest region by revenues, despite having roughly one-quarter the number of outlets as the US. Last year, revenues from company stores and royalties from franchisees topped $8.9 billion in Europe, compared with $7.9 billion in the US. It's a trend that analysts expect to continue when the world's biggest restaurant group reports second-quarter results on July 23. West expects US sales to rise by 3.4 percent, vs. 9 percent for Europe (19 percent if you include the foreign currency impact). This year, he reckons, McDonald's, the most American of brands, will generate 55 percent of its earnings outside the US.

The European region is leading the way, thanks to its transformation under Hennequin. The profitability of existing operations has improved in top performing markets such as Britain, Germany, and France (the country where the chain's profitability is second only to that of the US). And growth in Russia and Eastern Europe has soared. Hennequin says Russia, with 230 outlets planned by the end of this year, boasts the company's highest sales and profits worldwide on a per-restaurant basis.

Hennequin's recipe for success focuses on upgrading the customer experience. "The brand position is different in different parts of the world," he says. In the US, customers tend to eat on the go, and around 70 percent US sales come from drive-throughs. Europeans prefer to linger. "In Europe it's more about the experience," he says. "It's convenient and a destination place at the same time."

To make the Golden Arches a place where Europeans want to hang out necessitated a major design overhaul. Hennequin, as French country head, refurbished the chain's outlets there, and he was tapped to do the same across the 40-country-strong European operation. He created a McDonald's design studio outside Paris to come up with a range of eight design packages from which franchisees, who account for 68 percent of European outlets, can choose.

The transformation is dramatic. The bold red-and-yellow plastic signage has been replaced by muted facades in dark olive and yellow, and the 1970s-style interiors have given way to more elegant spaces. Retro plastic and Formica fittings are gone, supplanted by wood, leather, and stainless steel. Many outlets are even kitted out with wireless Internet connections and "egg" chairs designed by Danish architect Arne Jacobsen. This year, McDonald's will invest $800 million on opening 150 restaurants (up from 80 in 2007) and remodeling existing company-owned outlets.

Even the old Ronald McDonald play areas have gotten a serious redesign. Relabeled as Ronald Gym Clubs, the focus is on getting kids fit. Set up in a separate building adjacent to the restaurant, these mini-gyms offer everything from stationary bicycles on which kids can race one another to climbing walls and basketball hoops. There are also similar but smaller versions called Gym and Fun Clubs found in many stores. "This is one best practice we will share with the rest of the world," Hennequin says.

Indeed, the redesigns have proved so successful that McDonald's is considering importing them to the US. Hennequin is dispatching some of the Paris design team to Manhattan to scout out possible locations. If management in Oak Brook gives the go-ahead, a handful of outlets in the US will probably be sporting a new look by the beginning of next year. Hennequin reckons that the new styles will translate well worldwide. "Design is the one thing that doesn't need to be locally relevant," Hennequin says.

But almost everything else does, according to Hennequin, who started his McCareer 21 years ago as a branch manager in Paris. His strategy has been to stay true to McDonald's American roots while making the products and entire experience more localized. That focus is evident in everything from management and staffing to menus. If you don't fancy a Big Mac in the branch at the Piazza di Spagna in Rome, you can order pasta freshly cooked to order. In France, McDonald's serves wine and runs an annual promotion called Le Saga du Fromage, where instead of the usual cheddar, burgers are topped with beloved French cheeses such as Reblochon. The concept has now been rolled out across Europe and Latin America.

Meanwhile, McDonald's food innovation lab in Munich is continually tinkering with new recipes to test out in various European markets. There's porridge in Britain and a Mexican-themed week in Germany (apparently many Germans love spicy Mexican food) that includes offerings such as Los Scharfos, a fried cheese and jalapeño snack.

Another Continental-style offering helping to drive growth is the rapid rollout of McCafés. By the end of this year, there will be 940 across Europe. These coffee-bars-within-a-store offer cappuccino and espresso and a range of familiar pastries -- from cornettos in Italy and flan in Spain to tortes in Germany and Austria. In Germany, where there will be 547 McCafés by the end of this year, McDonald's is already the country's leading coffee chain.

Local innovation extends beyond food, too. Hennequin wants to make greater use of technology to improve and speed up service. In France, for instance, McDonald's began using kiosks where customers can order and pay for their food, because a majority of transactions there are made using debit cards. Now the kiosks, which also have been introduced in Germany, are being tested in other European markets. "McDonald's is much more sophisticated today," Hennequin says. "It's one brand with many facets."