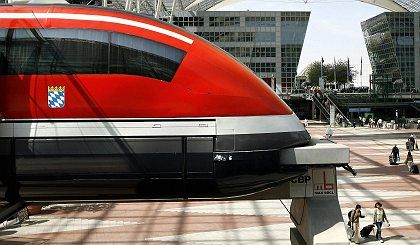 The Transrapid looks good. But will it ever run in Bavaria?

Anyone who has ever flown into Munich is familiar with the problem: You may have arrived at the airport, but it takes another hour to get into the city itself. And the train stops in every podunk village along the way.

For years, Bavarian Governor Edmund Stoiber has been acting cheerleader-in-chief for one seemingly elegant solution: A magnetic levitation train could cover the 40-kilometer (25-mile) distance in less than 10 minutes. Not only that, but it would also be a fantastic way for the long-serving governor to immortalize his reign -- and it would likely help Siemens, the Bavaria-based industry giant which manufactures the Transrapid maglev train together with ThyssenKrupp, sell more of the trains.

There is, however, a hitch: A €1.85 billion price tag. Despite years of negotiations, there is still a rather large hole in the finances. Berlin, Munich and Deutsche Bahn have together pledged over €1 billion for the train line -- leaving some €800 million unaccounted for. But on Monday evening in Berlin, the project may have come a bit closer to realization. Bavaria has agreed to up its contribution if the German government does the same. Stoiber, who is also leader of Bavaria's conservative Christian Social Union party, has also raised the possibility of getting funding from the European Union and Munich Airport.

"It is a present that all of Germany gives to itself," Stoiber said of the Transrapid on Monday.

Still, with a "final decision" postponed until September, it is still unclear if the thing will ever be built at all. Germany's center-left Social Democratic Party (SPD) has long been skeptical of the plan, given the high price tag, and on Monday, SPD leader Kurt Beck once again voiced his doubts. "The SPD is in favor of this technology," he said. "But whether the Munich project can be built is a question of a concrete financing plan."

Munich Mayor Christian Ude, likewise a Social Democrat, favors the building of a standard express train, which would cover the distance to Munich's center 15 minutes slower than the Transrapid but would cost hundreds of millions of euros less.

Despite the difficulties, though, Stoiber is not likely to give up easily. He is hoping for the train to be his most visible legacy in Bavaria -- and would lead to the airport named after his political mentor Franz Josef Strauss. He's held a number of passionate speeches on the plan, including his notoriously garbled plea for the project in January 2002.

"If you leave from Munich's main station in 10 minutes, without having to check in, then you are actually taking off at the airport  erm  at the main train station in Munich," he told his CSU party at a New Year's reception. "You are taking off in 10 minutes  look at the big airports like Heathrow in London or elsewhere, I mean Charles de Gaulle in France or, um, in Rome and when you see the distances, if you look at Frankfurt and then see that you need at least 10 minutes just to find your gate in Frankfurt" It was not one of Stoiber's finest moments.

Now, though, he is promising up to €450 million if the German government increases its pledge to €900 million -- an idea that Merkel on Monday didn't immediately say no to.

Still, if the Bavarian Transrapid plan fails, it will be yet another minor catastrophe for the technology. There have been numerous plans to build ultra-high-speed maglev tracks in Germany, but so far all of them have fallen through. Indeed, the only Transrapid railway in the world now runs between downtown Shanghai and its airport -- although there are plans to build one in Iran to hurry pilgrims from Tehran to Mashhad.

And in Germany? The only headlines generated by the Transrapid recently was the accident last September on the test track in Lower Saxony. Twenty-three people were killed when a train rammed into a track maintenance vehicle at 170 kilometers per hour.