SPIEGEL ONLINE: Mr. Nomikos, you have just started a campaign to free Greece of debt. Your organization buys up Greek bonds and then forgives the debt. Are you serious?

Nomikos: Professionally, I deal with distressed debt. And it struck me that Greece has a historical opportunity. In the euro, the Greeks have a very strong currency, while the price of their government bonds has collapsed. That makes it possible to buy back debt at very low prices and reduce the Greek debt burden with relatively little expenditure.

SPIEGEL ONLINE: You are asking your countrymen for donations. What do you tell them?

Nomikos: If you break down the national debt, each Greek owes around €25,000 ($31,485). So I am telling my fellow citizens to make themselves debt-free. Greek government bonds with a nominal value of one euro currently trade for around 12 cents. For a donation of around €3,000, every Greek can buy his freedom.

SPIEGEL ONLINE: How many bonds has your foundation already bought?

SPIEGEL ONLINE: And then you cancel the debt?

Nomikos: Not immediately. If we did that, we would decrease the impact of our project. When the GDP-to-debt ratio goes down, bond prices go up. If the movement becomes a great success, this could become a problem, because we cannot buy debt as cheaply on the markets. So we hold these bonds for a while and use any profits to buy more bonds. We plan to amass as many bonds as possible and then cancel the debt all at once.

SPIEGEL ONLINE: Have you set yourself a specific goal?

SPIEGEL ONLINE: Your first supporter was ship owner Evangelos Marinakis, the owner of Greece's biggest football club Olympiakos Piräus. He donated €168,590 ($212,322). How did you get him involved?

Nomikos: I called him about four weeks ago to ask if he would use our logo and message in his communications for Olympiakos FC. He immediately said yes. Half of Greece supports Olympiakos, so this was a big moment. Then I asked him whether he wanted to buy the freedom of his players. He said: I'll also buy the freedom of my employees. So he paid for 55 people -- €3,065 ($3,860) each.

SPIEGEL ONLINE: Who else has signed up thus far?

Nomikos: I have paid for 34 members of my family. But this is not about me asking rich friends to join. It is about the majority of Greeks helping their country. This campaign will only work if it becomes a social movement. People will look at each other and ask: What have you done to battle the debt?

SPIEGEL ONLINE: Wouldn't it be easier if all Greeks started paying their taxes?

Nomikos: The difference is that with taxes, you don't know what they are being used for. There is a lack of trust in the state, and I am not going to pretend that I can solve this cultural problem. But Greeks are also great patriots, and I think we should harness this feeling. A euro for "Debt-free Greece" is not a euro in taxes lost. It is complementary.

SPIEGEL ONLINE: What is the reaction from the Greek government?

Nomikos: Many people in the government and the diplomatic community find our campaign very encouraging. But remember, we are non-political and non-governmental. It is the first real show of a private Greek citizen to organize other Greeks to address our biggest problem. It shows to the world that we are taking initiative.

SPIEGEL ONLINE: You established the foundation in the US state of Delaware. Why not in Greece?

Nomikos: In Greece, I couldn't be sure the money would remain untouched. Also, being a US charitable foundation means that American taxpayers can deduct any donation from their taxes. It is an incentive for the wealthy Greek diaspora in the US.

SPIEGEL ONLINE: And for other nationalities as well?

Nomikos: Any friend of Greece is welcome. Originally, I thought mainly diaspora Greeks would participate. But there has been a huge amount of interest from the business community within Greece. Some companies are marketing their products with our slogan "Debt-free Greece" and pay part of the profits into our campaign. 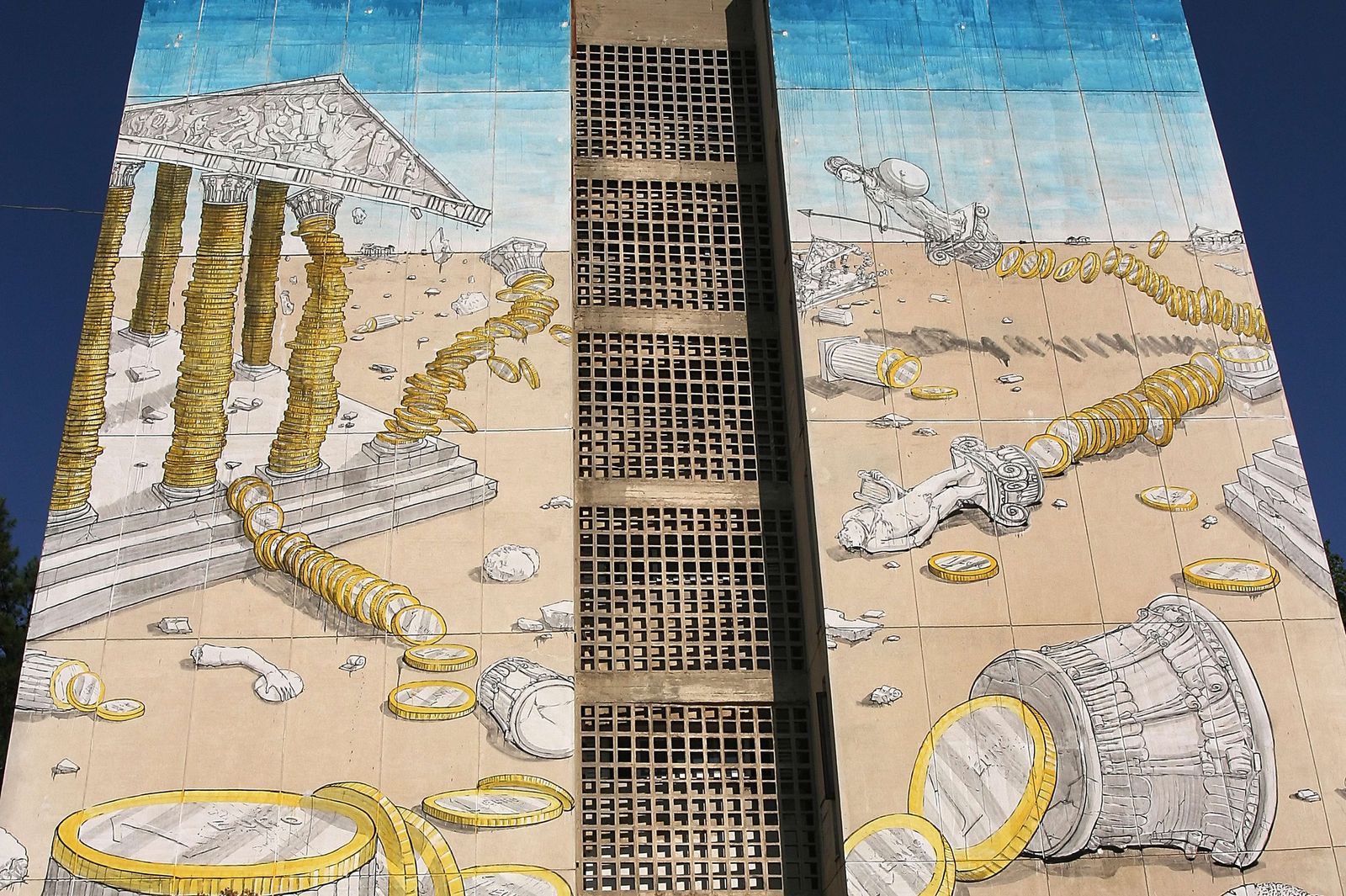 A mural by graffiti artist "Blu" in Thessaloniki.