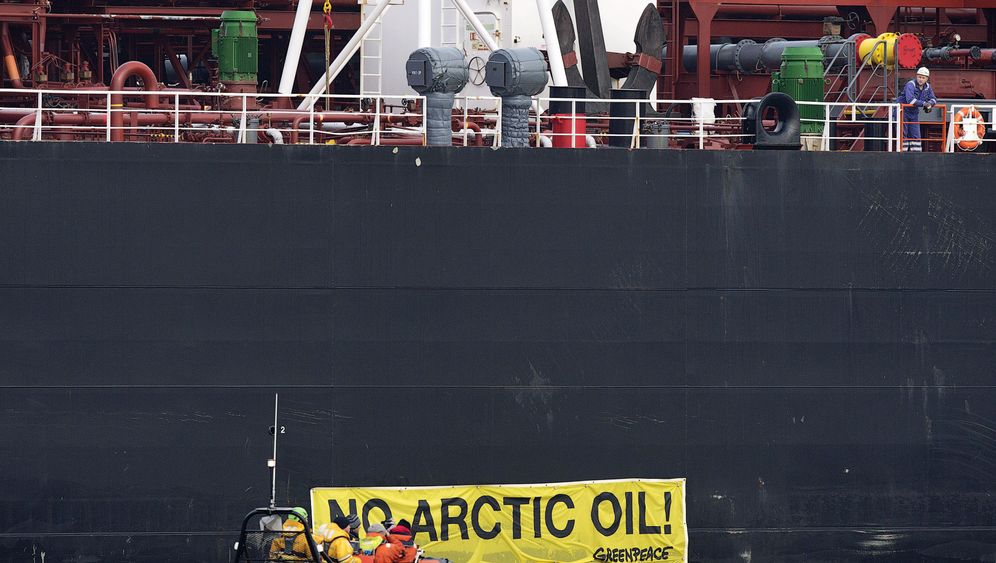 On the day the scandal hit newspaper headlines, Greenpeace International Executive Director Kumi Naidoo didn't panic. A South African with Indian roots who grew up in a township under the Apartheid regime, a couple million missing euros was far from the worst Naidoo had seen.

Instead of tearing out his hair, Naidoo twittered cheerfully about a lecture he was giving on the dispersal of power. He wished other climate activists happy birthday and counselled "young people out there" not to "put any faith in the current generation of adult leaders."

Unfortunately, Naidoo hasn't been particularly committed to following his own advice. Had he been, the organization he leads, Greenpeace International (GPI), might not have found itself facing a crisis last Monday after having lost €3.8 million ($5.2 million) through currency trading.

Acting independently and in violation of the organization's regulations, a finance department employee signed forward currency contracts worth €59 million to minimize Greenpeace's currency risks. But when some of the contracts came due, the European currency had -- contrary to expectations -- risen against many others.

The damage extends far beyond the lost millions. Greenpeace has been careful to cultivate an image as intrepid defenders of the environment. Calling themselves the rainbow warriors, activists hang from factory chimneys, throw themselves in front of whaling ships or risk jail time in Russia by calling attention to the plight of the Arctic. Now, another activity has been added: playing the financial markets. For an organization almost entirely financed by donations, the revelation is a PR disaster, endangering from one day to the next the greatest asset Greenpeace possesses: its credibility.

This scandal is about much more than one person's momentous mistake, it's about an entire organization in a state of upheaval. Naidoo wants to shift Greenpeace's focus from the industrialized countries to Africa and countries like Brazil, China and India. That, he argues, is the only way to counteract the threat of climate change. "We need to create an understanding in the developing countries that we will lose our planet if they follow the example of the industrialized nations," Naidoo says.

Since he took the job in 2009, Naidoo has put all of the organization's efforts into raising sustainability-awareness in the world's emerging economies. It's a huge effort that is plunging Greenpeace into disorder. It's also expensive: In 2012, Greenpeace spent close to €90 million on fundraising -- one third of all expenditures. And that's not the only thing angering critics. Naidoo also envisions future campaigns no longer being coordinated from Amsterdam, but delegated to various national offices, requiring more coordination and communication. Just integrating the different cultures involved in the organization requires so much effort that other things have been neglected, like financial oversight.

If GPI was still the tightly run organization it once was, the risky investment strategy would never have come to pass, or at the very least, a professional crisis management apparatus would have been on hand to deal with it. Instead, Naidoo rushed to Boston to receive a prize for his civil disobedience-related pursuits.

When Naidoo returned to Amsterdam on Thursday, Greenpeace Germany, the branch that attracts the most donations, had lost 700 supporting members. Greenpeace Switzerland, which is just as financially robust, wrote a dismayed letter to its supporters asking "for forgiveness, from the bottom of their hearts."

But while the national bureaus were placating enraged donors, top staff members were meeting in Arnheim to discuss staffing issues, leaving many of the desks at Greenpeace headquarters empty. At least one staffing issue has been cleared up though: The finance-department employee who finalized the contracts was fired.

The lack of supervision is a direct result of Greenpeace's restructuring. Because the campaigns have been delegated to individual countries, Greenpeace headquarters has become less important. Kumi Naidoo is rarely present and doesn't even have his own office there. He confirmed that many of the 150 people who work at headquarters will have to go; the main office is dissolving.

When former Chief Operating Officer Willem van Rijn left the organization in December 2012, his successor didn't arrive until May 2013. It was during this leaderless time that a finance department employee had the grandiose idea to sign massive and unsupported forward contracts with the currency broker Monex Europe. The euro crisis hadn't yet ended and the Greenpeace employee was certain that the value of the euro would drop.

Deals to limit exposure to the vagaries of the currency markets are normal in international business. Most, though, are limited to a span of just a few months to maintain flexibility. But the Greenpeace employee signed longer-term contracts. He bought currencies worth €36 million in 2013, and an additional €23 million in 2014. And the euro went up.

Greenpeace International management didn't notice that they were sitting on a time bomb until August 2013. Lawyers were brought in, but the contracts were watertight. There was no escape.

Then came Greenpeace's second mistake: It said nothing. Greenpeace Germany wasn't informed of the situation until March 2014, after the losses had already been recorded on the balance sheet. Many other bureaus didn't find out until a May meeting in Madrid. Even then, though, the story didn't get out. It only hit the headlines last week.

The organization has explained its cover-up by saying it was waiting for the final audit by KPMG, the business consulting firm it had hired. They say they would have naturally included the losses in the soon-to-be published 2013 annual report, including the €2.1 million losses forecast for 2014.

But did management hope to the issue would somehow go unnoticed? Perhaps Naidoo underestimated just how explosive the news would be. The South African has a different style than his two German predecessors, Thilo Bode and Gerd Leipold. The minutiae of daily business are not his thing -- a political scientist who completed his PhD at Oxford, Naidoo sees himself less as a manager and more as climate-change ambassador.

The tall, charismatic executive director is constantly jetting around the world, from the World Economic Forum to the Munich Security Conference, to save the world and convince companies, unions and religious leaders to take part in the fight against climate change. There's hardly any time left in his 70-hour workweek to check the balance sheets.

As an adolescent, Naidoo got his start by fighting against the Apartheid regime in his hometown of Durban. He was exiled and then worked for Nelson Mandela's ANC after the latter's release from prison. He led Civicus, a civil-rights organization, until 2008.

In Naidoo, Greenpeace found a man who, instead of being a dyed-in-the-wool environmentalist, combined environmentalism with social issues. His role models are Mandela and Gandhi. He wants cooperation instead of singular triumphs. When it comes to environmentalism, he argues, everybody should be willing to talk to everybody.

'It Can Never Happen Again'

The Germans in particular pushed back against his leadership style, afraid of losing their clout at home. There have also plenty of disagreements centering on money, focusing on questions as to how much the German chapter must provide to others and whether donors should be informed about the new focus? There wasn't even an informational campaign regarding Greenpeace's new direction.

German Chief Executive Officer Brigitte Behrens plays down the conflict. So far, she says, the delegation of international campaigns has worked and supporters are regularly informed about all activities through Greenpeace news. She also argues that German donations haven't been affected by the misbegotten purchase of foreign currencies. Because of Greenpeace Germany's organizational structure and strict legal restrictions in the country, the donations can only be used for campaigns. But, even so, the money is gone. "I'm very shaken," she says. "It can never be allowed to happen again."

Naidoo will try to compensate for the loss by saving on infrastructure, and not by cutting back on campaigns. The supervision gap has been closed, he says. From now on, all foreign currency contracts must have leadership's blessing.

But the PR damage remains. "We will overcome this scandal," GPI program director and Greenpeace veteran Pascal Husting believes. "But I was always proud that Greenpeace had a clean slate. This thing is going to stick to us forever."