The ongoing power struggle between carmakers Porsche and Volkswagen could soon reach its conclusion.

Volkswagen has increased its bid for 49.9 percent of luxury car maker Porsche to well above €4 billion from its original offer of between €3 and €4 billion, SPIEGEL has learned. The higher offer came after co-owner Wolfgang Porsche had rejected the first VW bid. 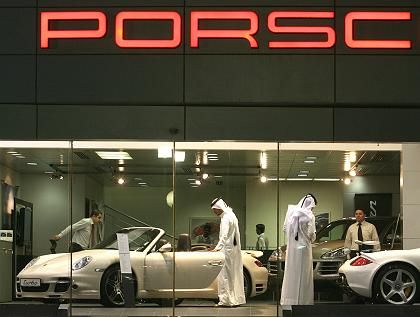 A Porsche dealership in Qatar.

However, Porsche CEO Wendelin Wiedeking regards even the increased VW offer as too low and favors an alternative plan to rescue his indebted company -- an investment by the emirate of Qatar.

Qatar has pledged to pay around €7 billion for a stake of just over 25 percent in Porsche Automobil holding and for the VW share options Porsche currently holds.

Both plans are to be discussed at a special meeting of the Porsche supervisory board on July 23.

The board includes members of the Porsche and Piech families who have been locked in a long-running power struggle over the future of Porsche and VW. The VW group is considering holding a supervisory board meeting on the same day.

Porsche is heavily indebted due to its failed bid to acquire a majority of VW last year.