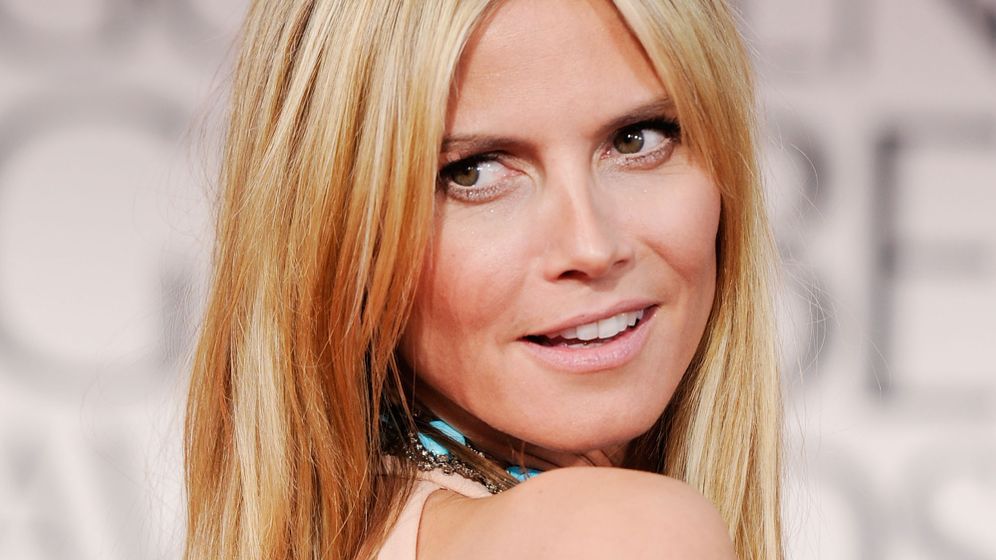 Their love is gone, but the slippers can't do much to help. German supermodel Heidi Klum and British soul and R&B singer Seal are no longer a couple, but Günther Klum still wears the worn red Birkenstocks from his daughter's fashion collection imprinted with the lyrics of the Seal song "Kiss from a Rose." The shoes were specially made for "Oppa," the nickname Heidi and Seal have always used for Günther.

The phone rings. It's someone from Bunte, the German tabloid magazine, wanting to know whether it's true that Heidi and Seal are back together. Günther Klum says he has no comment, and besides, he adds, he's busy. The Karneval parade is about to begin, a popular event in the town of Odenthal, not far from Cologne, and there it is, the first float. Klum says goodbye to the reporter and hangs up.

Klum, 66, who sports a vandyke beard and gels his hair back, isn't wearing a costume. Instead, he's wearing his everyday outfit: a plaid shirt wide open at the collar, cardigan and gold-framed glasses with tinted lenses. "I'm going as myself," he says.

This man has three hobbies: Germany's Karneval festival, his native region in western Germany and his daughter Heidi. She is also his life's work, and he is her manager and promoter. As managing director of Heidi Klum GmbH & Co. KG, he launches advertising deals and negotiates the contracts for her show "Germany's Next Topmodel," which returned for its seventh season to ProSieben, a German television station, last week.

Günther Klum is the German modeling business, or at least he acts like that's the case. But the rest of the somewhat delicate industry sees things a bit differently. Former "Topmodel" candidates he represents are abandoning him in droves, and the first thing people at ProSieben do when they see him coming around the corner is hide.

Anyone who wants something from Heidi in Los Angeles has to go through "Yünther," as his name is pronounced in his hometown's local dialect. He is the bulldozer clearing the way for his daughter. It's hard to say whether Heidi is so successful because of or despite her lumbering father. Business associates say she is just as hardnosed as he is, only a bit cleverer. When a lot of money is at stake, he sometimes says he has to "first ask the boss," referring to his daughter.

A few years ago, senior editors at Gala, a celebrity gossip magazine, weighed whether to launch a magazine exclusively devoted to Heidi Klum. The project failed because of how much her father was demanding in compensation. One of his mottos is: "You make the most money by saying no."

He has the prize everyone wants, and he sets the prices. He recently unleashed his attorney once again on someone who was selling Heidi T-shirts without his permission. Such threats of legal action usually end with the offender donating a few thousand euros to a children's charity that the Klums support or to a local fire department or church.

Günther Klum was a production manager at the company that makes fragrances under the 4711 brand, but then it dawned on him that his most lucrative product wasn't eau de cologne but, rather, his daughter Heidi. The 1.76-meter (5'9") tall blonde with a stunning figure is a joint production of him and his wife, Erna, a hairdresser and former member of the triumvirate of so-called "fools" presiding over the local Karneval festivities. Since then, being Heidi's father has been Klum's main job.

Heidi Klum won a beauty contest on a popular German television program at 18 before going on to model in the catalogues of the German mail-order giant Otto. She then moved to New York and became a sex symbol after an appearance on the cover of the swimsuit issue of Sports Illustrated. In an interview, she said that her mother would send her German candies called Katzenpfötchen (cats' paws), a statement the Katjes, the company that makes them, promptly used for marketing purposes. But then father Klum made a call to Katjes executives and told them to stop using his daughter's name -- or at least not without a proper contract.

It was Klum's first major promotional deal, and it earned her several hundred thousand euros a year at first. When her fee began approaching a million, Klum became too expensive for Katjes. Lena Gercke, a "Topmodel" winner, later took over the job, though for much less money.

The ratings for "Germany's Next Topmodel" aren't nearly as high as they used to be, but Papa Klum still has a lot of pull among the ProSieben executives in Munich. About the only other person who gets this much respect at the station is the German entertainer Stefan Raab. The director of the TV division of the ProSiebenSat.1 media conglomerate even calls Klum on his birthday.

Station officials say that working with Mr. Klum is "a great pleasure." Off the record, though, employees say that the walls have been known to shake during heated negotiations. Klum was reportedly irate when ProSieben added another show featuring young models to its lineup, "Die Model WG," about a group of models sharing an apartment.

There have also been frequent disagreements over the marketing of "Topmodel" candidates. Today, the models are represented by Red Seven Artists, a subsidiary of ProSieben, until the show season is over. After that, Günther Klum has access to the candidates. He shapes their professional lives for the next few years and determines where and when they work. The models themselves have no say in the matter.

The only time any of this ever comes to light is when one of them has managed to escape his clutches. "The girls really don't understand what they're signing," says Neele Hehemann, 23, a model who appeared in the fifth season and, after three months, hired an attorney to help her get out of her contract with Klum. "He didn't get me a single job during that time, and he didn't let me go to any casting calls. At some point, it became a financial problem for me." Things are much better at her new agency, she says. Klum declines to comment on the situation.

It's safe to assume that, at least in the past few years, the contracts that the station, the production company and Günther Klum have had the candidates sign have ranged between the objectionable to the suspect. Although the winners were formerly guaranteed earnings of €400,000 ($530,000), the aspiring models weren't paid a cent for participating in the show. After the show, 20 percent of their earnings went to Klum's agency and, in the first few years, up to 16 percent went to ProSieben. These figures are much higher than the standard industry percentages.

While ProSieben hustles former candidates through other programs in its lineup -- for example, using them as guest reporters on its tabloid show "taff" or as participants in its reality show "Die Alm" -- Klum provides them with what he describes as "premium jobs": doing ads for Krüger, a maker of the traditional Bavarian dresses calls "dirndls," or spending an hour signing autographs at a shopping center in Koblenz.

Last year's winner, Jana Beller, is now best-known for her very public quarrel with Klum. Two months after the finale, he announced that he had fired her for supposedly missing appointments and being unreachable. Beller countered that she was the one who had terminated their agreement and said that the months with Klum were "the worst two" in her life.

Another candidate managed to get away from him after a court declared that a subsidiary of Heidi Klum GmbH & Co. KG had improperly exercised the parent company's rights without authorization. Klum was forced to pony up for both sides' legal costs.

More about Drama than Looks

Starting with the current season, at least the finalists will receive proper employment contracts guaranteeing them a fixed income. It is a tentative attempt to spruce up the images and the station. The image of the candidates on "Germany's Next Topmodel," on the other hand, has always been of secondary concern.

"The show has never produced a new Nadja Auermann or Claudia Schiffer," says casting agent Rolf Scheider, who served as a juror on the show for two seasons. "It's a reality show," he continues, "which is why every season has to have girls with absolutely no modeling talent whatsoever. But they can blubber, get on people's nerves and quarrel, which is why viewers find them fascinating. They are kept on the show for as long as the jury can justify it."

In fact, it's the oddball characters that are remembered most, such as Tessa, who gave everyone the finger when she was voted off the show, or Fiona, who was portrayed as a bitch. Marco Sinervo, the managing director of MGM Models, has some former candidates under contract. "Some customers explicitly don't want models if they're from the Klum show," he says. "They're too shrill for them. It doesn't do their products any good."

The dilemma for "Germany's Next Topmodel" and the Klums is that they promote the modeling business while simultaneously destroying its mystique. The girls are products, just like Heidi Klum herself. When her father talks about her, he sounds like a sultan quoting the value of his daughter in camels. When he talks about the world's celebrities, it sounds as if he could just as well be talking about his friends at home, such as Karl-Heinz the barber or Fritz the undertaker.

When he mentions "Claudia," he's referring of course to Claudia Schiffer, and "Victoria" is naturally Victoria Beckham. He says that popular German TV host Thomas Gottschalk almost wasn't let in to Heidi's Halloween party "because, after all, no one in America knows him." And he talks about how former US President Bill Clinton supposedly came up to him and his wife at an awards ceremony and asked whether Erna had a new haircut. Clinton, he says, has even written him two letters in which he addressed him as "Dear Günther." Klum also likes to write letters, which arrive in large envelopes with a charity stamp on the front and a red seal with an "H" for Heidi on the back.

So, what's next after Heidi? For Günther, it would ideally be managing another girl with whom he could rake in a fortune. But that's probably a once-in-a-lifetime opportunity, even for someone like him. So far, at any rate, there is no new Heidi Klum in sight. Officially, ProSieben says that Heidi is "the best" and irreplaceable. But employees report that the station has periodically given thought to who could take over the show should Heidi decide to call it quits -- or if ratings continue to slide.

Claudia Schiffer? Too cold. Eva Padberg? Just not enough there there. Perhaps Lena Gercke, the first season's winner and the host of the Austrian version of "Topmodel," who is currently making headlines because of her relationship with Sami Khedira, a star German soccer player? In the end, the executives have repeatedly come to the conclusion that their best bet is to stick with the folksy Heidi, who perfectly embodies the American dream and raves about her mother's sauerkraut soup in interviews.

The Karneval parade is over in Odenthal-Voiswinkel. It was a worthwhile afternoon for Günther Klum. He caught six bouquets of flowers that the people on the floats were throwing to the crowd. He intends to give the flowers to his wife. And a packet of tissues, which he puts in his car, just in case he gets an unexpected cold one of these days.