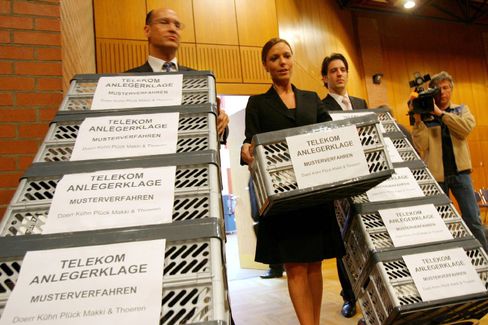 Lawyers bring cases of files into court on Monday.

It only happens once every few decades that the judges of Frankfurt's senior district court venture out of their courthouse to conduct a trial. They had no choice with the class-action case brought by 17,000 frustrated Deutsche Telekom shareholders which started on Monday.

Lack of space forced the court to rent a civic hall that provides room for 600 people. Security guards have been hired to prevent any trouble and to ensure that "the court doesn't lose control over proceedings," as a court spokesman put it. Seventeen days of hearings have been set so far.

The shareholders are suing the company because they claim they were duped into buying shares in the former state telecoms monopoly by misleading or missing prospectus information ahead of a share issue in 2000.

Deutsche Telekom Chief Financial Officer Karl-Gerhard Eick and former chief executives Kai-Uwe Ricke and Ron Sommer are due to appear as witnesses to the events surrounding the company's third capital raising in 2000, when 200 million shares were sold.

The claimants, many of whom put their life savings into what they saw as a safe investment, are suing Deutsche Telekom for up to €80 million ($125 million). The issue price was €66.50 per share, around six times what the shares are worth now.

Emotions have been running high among the thousands of shareholders who put their money in Telekom stock. But the company denies their accusations that it overvalued its property assets in the issue prospectus, and that it concealed its plans to buy US wireless company VoiceStream for about $35 billion. It agreed the acquisition a month after the subscription period ended.

"The advertising strategy at the time and the current line of the defence don't fit together," Andreas Tilp, a lawyer for the claimants, said at the start of the trial.

Telekom had advertised its shares as a safe-return "people's share" during its three capital issues in the 1990s and in 2000, said Tilp. But it had kept silent about the substantial financial risks it faced, he added. Its strategy now was to portray the share as a speculative investment, said Tilp.

Deutsche Telekom settled with US shareholders who had sued in a class action over the same issues for $120 million in 2005, but did not admit any wrongdoing. But in Germany, Deutsche Telekom says it is confident of winning the case, in which it is defending itself on 33 separate issues.

In total, 17,000 shareholders have filed 2,770 claims over the 2000 share sale and a previous issue in 1999, for which a court date has not yet been set. About 1,000 have since withdrawn their claims or died. Some 900 lawyers are representing the shareholders.

A defeat in court wouldn't hurt the company financially. "If the shareholders win, it would hurt the share price moderately maybe for just a day," analyst Theo Kitz of private bank Merck Finck told the online edition of Manager Magazin, a sister publication to SPIEGEL.

However losing the case could hurt the company's image and be a setback to its efforts to win back investor confidence.

Deutsche Telekom's first stock offering in 1996 effectively launched an equity culture among Germany's traditionally risk-averse small investors who until then had preferred to keep their money in savings accounts and fixed-income securities. However the slide in Telekom's share price since 2000 has turned many Germans off the stock market.

Depending on its outcome, the case could encourage investors in other companies to join forces and mount similar class-action suits.

The case is the first test of a new form of legal process introduced in Germany to deal with mass claims in cases concerning capital markets.

"The Telekom case is the test for the law," said Jürgen Kurz of the German Society for Protection of Share Ownership. Claimants in class-action type suits will have less impact on the outcome of proceedings but it will be cheaper for them to take legal action in this way in future.

And that could mean that German CEOs will in future be facing more court cases in civic halls and congress centers like the one in Frankfurt.

With reporting from Reuters