Aldi hopes to cash in on the prosperity of China's growing middle class. German products are in high demand in China. Germany is among the 10 largest exporters of food and beverages to the country. Until this summer, Aldi had only sold its wares to Chinese consumers via an online shop. Now, it has finally expanded to brick-and-mortar locations.

In China, only companies who behave are permitted to do business. Aldi's managers know this. That's why they don't talk about freedom or democracy when asked about the situation in Hong Kong. Instead, they simply go on about the safety of their employees. "The current political protests," Aldi said in a statement, "is something we take very seriously in relation to the safety of our employees."

For months, millions of Hong Kong residents have been demonstrating in the streets of the important financial hub. The protests concern the special administrative region's relationship with its infinitely more powerful neighbor, China, as well as civil liberties and, increasingly, the role of the economy. But to break the power of the demonstrations, the government in Beijing is forcing domestic and foreign companies to take its side. It is pressuring firms' boards of directors, taking ads out online and forcing companies to put out pro-Chinese statements. It's almost as if the Chinese government wants to prove that protesters' fears are entirely justified.

What began as limited objections to a stricter extradition law has become a symbol for one of the defining conflicts of the 21st century. On the one side is the West, whose companies come down in favor of human rights and democratic values. On the other side is the authoritarian Beijing government, which knows perfectly well just how dependent these companies are on China's massive consumer market.

When push comes to shove, business generally trumps principles. Far too often, Western companies have bent to Beijing's will. China is using multinational corporations to "discipline the rebels in Hong Kong," wrote the Financial Times newspaper. Berlin-based China scholar Max Zenglein says that the People's Republic is "politicizing the economy in ways that are unprecedented." Zenglein works at the Mercator Institute for China Studies and has spent the last several days in Hong Kong. A week ago, he attended the mass protests and spoke to activists and residents.

What he heard there didn't leave him feeling terribly confident. On the contrary: "A certain sense of pessimism" has spread among the residents of the financial hub, he found. He believes each side has also become more deeply entrenched. Many Hong Kong-Chinese expect China to force the city into complete submission soon, rather than wait until 2047, as foreseen by the handover contract with Hong Kong's former colonial occupier, the United Kingdom.

Many activists were discouraged by how willingly Cathay Pacific, the Hong Kong-based airline, bent to Beijing's will in the past week. First, the company fired four employees who had joined the protests. Then CEO Rupert Hogg and marketing chief Paul Loo were forced out, apparently because they weren't quick enough to follow marching orders from China.

The Scandinavian airline Finnair toed the party line as well -- even without Beijing's insistence. The airline doesn't want to endanger its landing rights in the city, so it warned its employees not to demonstrate against the government while wearing or somehow displaying the company's logo. Anyone who disobeys this order would be "removed" from future flights, Finnair said.

Numerous other Western managers had previously tried to ingratiate themselves with the powers that be in Beijing, including, for instance, the bosses of the world's four largest consulting firms: PwC, Deloitte, KPMG and EY. Employees of the so-called Big Four had taken out newspaper advertisements to express solidarity with the demonstrators. The government in Beijing called it the "wrong opinion" in its own, Communist Party-controlled paper, The Global Times. It didn't take PwC long to assure the government that it would "reject every action and assertion" that called into question China's sovereignty.

The Chinese internet giant Alibaba likewise canceled a planned initial public offering in Hong Kong, presumably to avoid running afoul of Beijing. And the Italian fashion label Versace apologized profusely for T-shirts that identified Hong Kong as its own country. The articles in question were removed from the shelves.

'Change Through Trade' Has Failed

The case of HSBC, the British-Chinese bank, shows just how relentlessly Beijing is pressuring companies to acquiesce. In early August, CEO John Flint cleared his desk, much to people's surprise. He was soon followed by the bank's top China executive, Helen Wong.

Officially, neither of the two executives could be accused of doing anything wrong. The bank was firmly in the black. But the fact that HSBC had somehow been involved in the mysterious arrest of Meng Wanzhou had come to weigh on both of them. Wanzhou is the CFO of the telecommunications giant Huawei. She's accused of violating American sanctions against Iran. Wanzhou has been in custody in Canada since December 2018 and is awaiting extradition to the U.S. The Chinese have accused HSBC of divulging information about Huawei, which is their customer, to American investigators and thus of contributing to Wanzhou's arrest.

According to Sebastian Heilmann, a professor of government and Chinese political economy at the University of Trier, the naive Western notion of "change through trade," which posits that the opening of a market is followed in the short or long term by political liberalization, has "completely failed" in China.

For years, China has been developing into the leading police and surveillance state of the digital era, one with direct access to companies' headquarters. Even foreign firms must tolerate having Communist Party overseers in their offices. The data-driven "social credit" system, with which the government in Beijing surveils the online behavior of its citizens, now also applies to the economy.

Heilmann says companies have little choice but to play along. The government in Beijing receives virtually uninterrupted access to firms' data. It knows who has violated contracts, which managers are ensnared in legal battles and who is cooperating, technologically speaking. Obedience is rewarded. "The better the social credit ranking, the better the access to the market," Heilmann says.

Perfecting the Art of Kowtowing

China is undoubtedly a dictatorship, but Western companies have been courting it for years. Microsoft, for instance, has removed mention of "democracy" and "human rights" from its Chinese web presence, while Cisco provides network services to Chinese state security.

German firms, too, have perfected the art of kowtowing in China -- even though this explicitly contradicts the values they claim to stand for. A number of notable Western companies, including Daimler, Bosch and Deutsche Bank, recently founded a so-called values alliance, which aims to facilitate their efforts to protect the climate and society on the whole. But when it comes to their relationship with China, the economic powerhouse, many companies suddenly place more value on their bottom line than on standing up for democracy.

Take Adidas, for example: In its official "vision and values," the company purports not to do business with any partners who violate human rights. That would be all well and good if it weren't for the fact that the sportswear manufacturer does a fifth of its business in China. Many Adidas shoes are still sewn together in the People's Republic, and CEO Kasper Rorsted even has positive things to say about China's social credit system. Speaking to the German weekly Welt am Sonntag, Rorsted said social scoring was "allowed in China." He added: "We're a global company. What right do we have to say that German law is superior?"

In the past weeks, Adidas has said as little about Hong Kong as Germany's other economic heavyweights. Siemens CEO Joe Kaeser, whose position as the head of the Asia-Pacific Committee of German Business certainly qualifies him to have an opinion on Hong Kong, has opted to stay silent. It wasn't until he was approached by DER SPIEGEL early last week that he finally said "businesses are deeply concerned with the developments in the special administrative region."

Whoever gets into a brawl with China has only themselves to blame. At least that's how most German businesses see it. This is particularly true when it comes to the three highly sensitive T's, for which Beijing has absolutely no patience: Taiwan, Tibet and Tiananmen. The first is the island republic that China claims belongs to it. The second, a region in the Himalayas that Beijing has controlled since 1951. And the third refers to the uprising in 1989, talk of which is taboo in China.

German companies have long understood that talking about these three things is strictly forbidden. The German flagship carrier, Lufthansa, for instance, stopped offering flights to "Taiwan" in 2018; now, it only has flights to "Taiwan, China." That's also how Germany's Foreign Ministry refers to the controversial territory.

The same year, Daimler also apologized for having "deeply hurt the feelings of the Chinese people" by citing a quote from the Dalai Lama, the spiritual leader of the Tibetan people. In April, the camera manufacturer Leica distanced itself from a promo film in which footage of a lonely protestor could be seen shortly before the massacre at Tiananmen Square.

China is Germany's largest trading partner, with a volume of more than 200 billion euros ($221.3 billion). When trade between the two countries slows, as it has recently, German companies feel it immediately. This is especially true of the automobile industry, for which China is of the utmost importance. Audi and Mercedes sell roughly a third of their vehicles in the People's Republic.

That's why the heads of Germany's vaunted car companies want to do everything to avoid a conflict with Beijing. There's also the fact that some German companies, like Daimler, are now heavily under the influence of powerful Chinese investors. With around 10 percent of shares, the Chinese businessman Li Shufu is Daimler's largest individual shareholder. In late July, the state-owned automaker BAIC also bought up Daimler stock. When it comes to the situation in Hong Kong, Daimler is careful: "We are closely observing the developments and hope for a quick de-escalation."

These kinds of close economic ties can easily make a company submissive, as Daimler rival Volkswagen has also learned. The largest automaker in the world has a factory in Xinjiang, where there is also a re-education camp for Muslim Uighurs. When a BBC reporter recently confronted VW CEO Herbert Diess about this, the executive claimed to have no knowledge of the camp. Diess instead said he was proud to have created jobs in the region.

European governments likewise have no interest starting another big conflict with Beijing. This is also true for German Chancellor Angela Merkel. When Merkel travels to China in September with a large business delegation, her official agenda will include talks about the two countries' strategic partnership. In the future, it's very likely that Germany will have a closer trade relationship with China than with the United States. With that in mind, Merkel will be pushing for a massive investment agreement, a deal the European Union hopes to hammer out with China by next year. In Berlin, government figures have noted positively that China has refrained from using violence in Hong Kong.

Companies, including VW, say that the conflict in the city hasn't had any massive repercussions thus far. The German carmaker merely had to close its sales floor in Hong Kong for a few hours. 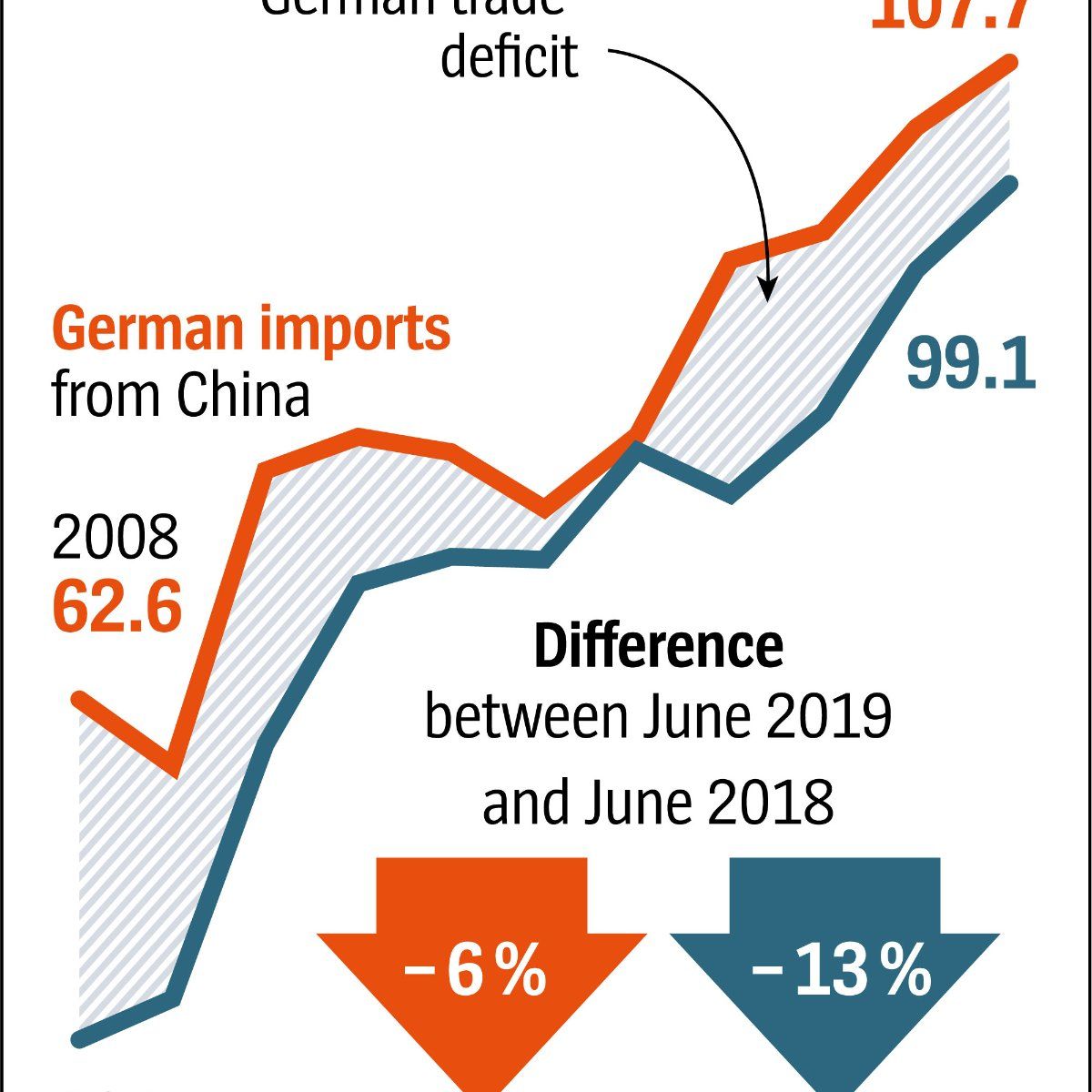 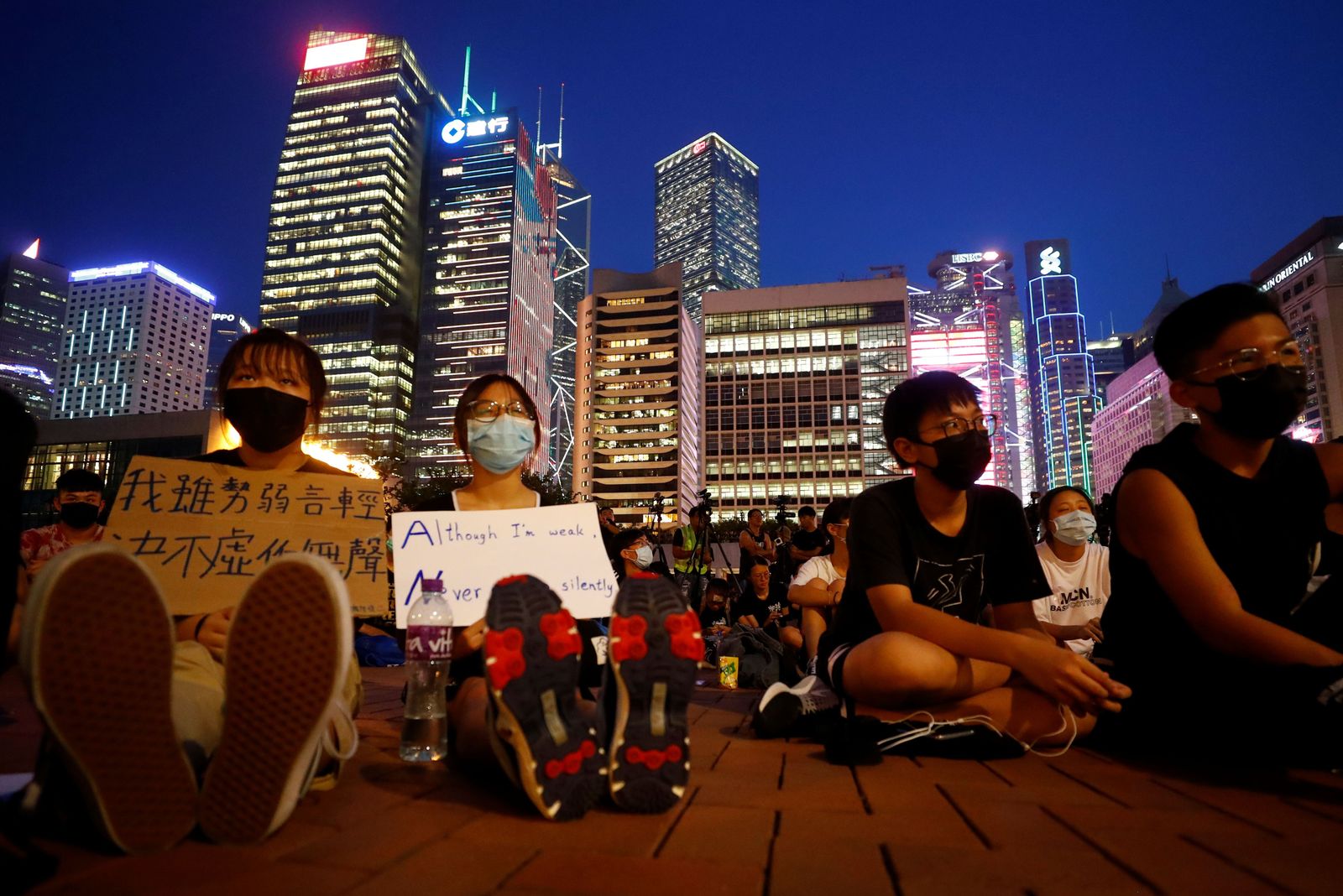 Students attend a rally to call for political reforms outside City Hall in Hong Kong on Aug. 22: "A certain amount of pessimism" has spread among residents, says a leading expert on China in Germany.