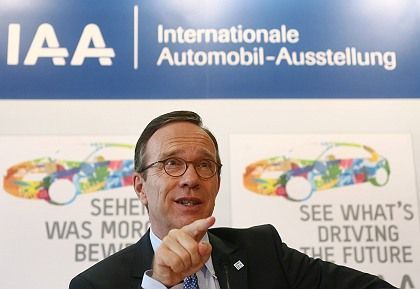 VDA President Matthias Wissmann is the most powerful lobbyist in Germany.

Matthias Wissmann sits by the fireplace in a luxury hotel in Brussels. A slender man, he wears a gold-buttoned dark blue jacket and round horn-rimmed glasses, the same glasses he seems to have worn for years. He speaks in clear, precise sentences and can instantly switch on a smile, no matter how much he dislikes someone.

On this day in Brussels, Wissmann is explaining which institutions he can "read" best. Three are important to him, he says: the European Parliament in Strasbourg, the German Bundestag and the Élysée Palace in Paris. Reading parliament sounds nice, much nicer than influencing representatives -- even if it means exactly that. Wissmann was at the Élysée Palace the day before, shortly before flying to Brussels. The Élysée is difficult, he says.

For over a year now, Wissmann has served as president of the German Association of the Automotive Industry (VDA), voice of BMW, Daimler, VW, Porsche and around 600 other companies. No other lobbyist in Germany is more powerful. After all, no other industry is as important as the car industry, which is responsible for €290 billion ($449 billion) in annual revenue and 750,000 jobs. Wissmann is the mouthpiece for an industry which is responsible for almost one in seven German jobs. Few people in Germany are so influential.

Just how much weight that voice carries was seen last Monday, when German Chancellor Angela Merkel and French President Nicolas Sarkozy met in the southern German city of Straubing and arrived at an agreement on automobile CO2 emission limits. The European Commissions original recommendations were considerably watered down. Among other things, the transition period will now be seven years rather than the original four.

But Wissmann wasnt present at the discussion table in Straubing. He had an even better seat for the negotiations: inside the heads of those involved.

The compromise reached by Merkel and Sarkozy fit rather neatly with Wissmanns wishes. In the fight between German cars and climate protection, Wissmann wants the cars to win -- and he has largely gotten what he wanted.

German automobile manufacturers, who mainly produce heavy, highly polluting sedans, have bought themselves a great deal of time with the longer transition period. Yes, they could develop newer and more fuel efficient technology. But they could also expand their fleets with a few compact cars or hybrids, reducing the fleets average consumption.

The agreement is a considerable improvement over the European Commissions recommendation, Wissmann said after the compromise emerged, although he immediately added that it is still not an ideal solution -- something the nature of his job requires him to say. Within his association, talk was of success, but one of the most important rules of lobbying is not to talk about success publicly. Lobbying is a quiet business; The art of it lies in getting politicians to make the desired decisions, while making it look like they arrived at those decisions on their own.

Wissmann is a master of this art. He knows the other side, having served as a member of the Bundestag, Germanys parliament, for 31 years. Under former Chancellor Helmut Kohl, Wissmann was a speaker on economic issues for the parliamentary group of the Christian Democratic Union (CDU) before becoming minister for research and later transport minister.

Wissmann left the Bundestag on May 31, 2007. The next day, he became a lobbyist. He changed sides from one day to the next, from representative of the people to the shareholders representative, without even taking a break in between.

When Wissmann took over as VDA president over a year ago, things were looking better for the climate than for German cars. European Commissioner for the Environment Stavros Dimas wanted to implement an emissions limit of 120 grams of CO2 per kilometer for all new cars by 2012. Manufacturers who didnt reach these specifications would pay penalties -- high penalties. The goal of 120 grams of CO2 per kilometer is considerably easier for Fiat or Renault than for Daimler or BMW and so it was clear who would primarily pay the price: buyers of German cars.

Wissmann had to do something. He gave interviews, went on talk shows, took part in panel discussions -- that was part of the strategy, to tell the public about the German car manufacturers plight. The other part was much less conspicuous: Wissmann had to step into the political ring, in this case Brussels politics.

In the past few months, Wissmann has met with many European Parliament members. He already knew them well -- after all, shortly before he joined the VDA, he was chairman of the Bundestags European Union committee. The day after the conversation by the fireside in Brussels, Werner Langen, a member of the European Parliament for the CDU, authored a press release in which he stated that CO2 legislature in the European Parliament has long been on a realistic path. In the press release, Langen called for exactly what Wissmanns VDA wanted -- even some of the wording was identical.

Langen has been in Brussels since 1994, where he is an expert on automobile CO2 limits in the European Parliaments industry committee. Hes an experienced man and he can get out a majority vote. Anyone wanting to get something done in Brussels regarding automobile-related issues would do well to have him on their side. Wissmann and Langen have known each other since the 1970s. I think Matthias Wissmann is doing a super job there, says Langen. He sounds like a fan.

Next stop for Wissmann was Paris. He knew he couldnt achieve his goal without the French. No really important topic is decided in Europe without France, and so strictly speaking Wissmann had two opponents to overcome: the climate and France.

Again his contacts helped him, this time in Germany, more precisely in the CDU. Of course I can get an appointment with a federal minister when necessary, says Wissmann. But thats not difficult -- after all, any president of the VDA would get a slot in a ministers schedule. The real question is whether another VDA president would also regularly send text messages to the chancellor -- and get answers back. Angela Merkel doesnt just answer Wissmanns messages; she also took care of the agreement with Sarkozy. If Wissmann had personally dictated the compromise between the two himself, it would hardly have come out much differently. 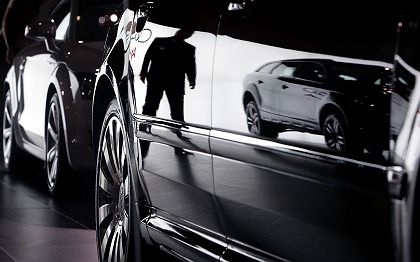 Germany's powerful auto lobby has many connections to government.

When Daimler Chairman Dieter Zetsche and VW Chairman Martin Winterkorn got Wissmann on board for the association, they didn't need a car expert but rather someone who knew how to shift a mood, how to sway a decision.

Representing a position is work Wissmann knows well. Before it was his own position, now its that of the companies that pay his salary. Technically, not much has changed. The job reminds me strongly of my time as transport minister, says Wissmann. He didnt even have to replace his staff. Next to him sits Andreas Kraus, his press officer, a soft-spoken blond man wearing a three-piece suit. Kraus filled the same role for Wissmann during his time in the Bundestag. When asked whether his job has changed much, Kraus answers: Nope.

When one accompanies Matthias Wissmann about his work for a while, it quickly becomes clear that the difference between his work as a politician and as VDA president is indeed small. Before he sat behind his ministers desk and lobbyists came through the door wanting something from him; now hes the one coming through the door. Basically only the seating arrangement has changed.

Both lobbyists and politicians fight for certain interests, both work to persuade, both depend on good contacts and majorities. One does it for money, the other -- if the voters are lucky -- for the common good. Lobbying is what is left when the ideals are taken out of politics.

A couple of days after his stay in Brussels, Wissmann is in Berlin again. He has work to take care of in his legal office, located on the 22nd floor of a downtown building. He looks out over Berlin and can see the Reichstag, the Chancellery and Tiergarten park. He says he enjoys the view from up here.

Ive always believed in the American principle of alternating between politics and business, he says. Both sides learn from each other, helping to dispel prejudices. Wissmann doesnt see it as problematic for a politician to become a lobbyist. It just needs to be done properly. Everyone needs to know who youre working for. Just like in my case. It sounds as if one could simply abandon old convictions, old interests and old connections.

For his new job, Wissmann had to adapt a great deal, but gave up very little. Angela Merkel had thought of making him Germany's European commissioner, but those were just plans, while becoming Germanys most important lobbyist was a concrete offer -- and the VDA presidents very high salary didnt hurt either.

A few months ago, it looked like the European Commission was going to get serious about climate protection and force manufacturers to make more efficient cars. They wanted to take drastic measures, and quickly.

Enter Matthias Wissmann. Hes won auto manufacturers an extra seven years. It looks like he was a good investment, worth every cent they pay him.