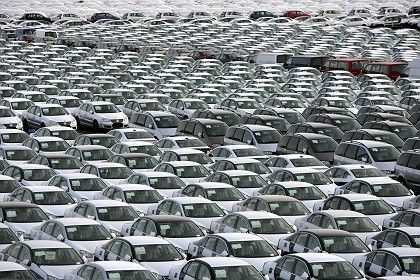 While millions in northern Germany watched Spain defeat Italy Sunday in the Euro 2008 quarterfinals, a brief but violent storm outside was pelting 30,000 Volkswagen automobiles with hail the size of pingpong balls.

The vehicles were parked in the open in the northwestern German town of Emden, one of Europe's three main vehicle-transportation ports. Each year about 1 million vehicles either enter or leave the city's port, according to the Volkswagen Web site. The company employs around 7,900 people there at a plant producing the company's Passat models.

Company spokesman Christoph Adomat told the Süddeutsche Zeitung that a significant proportion of the 30,000 vehicles parked outside had suffered chipped paint or dings, although no windshields were broken. A VW spokesman told the Dow Jones Newswires that around 100 extra workers were being sent to Emden for a quality check on all the vehicles.

"We need to make certain that all customers receive a car that is absolutely in good working order," Adomat told the Associated Press, adding that the company was insured against hail damage.

Although the company has not released an estimate of the damages incurred, according to the Süddeutsche Zeitung it could reach the hundreds of millions of euros.