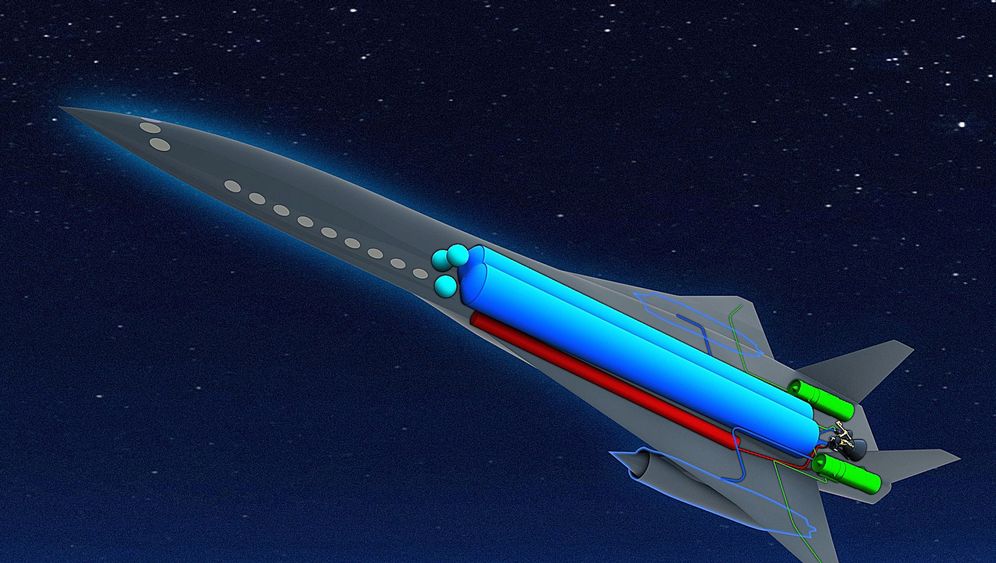 Airbus has a new dream, and its name is ZEHST (Zero Emission High Supersonic Transport). Design plans detail a "hypersonic" commercial jet that can carry up to 100 passengers while cruising at 4,200 kilometers per hour (2,600 miles per hour) at an altitude of 32 kilometers (20 miles). The ambitious project is meant to fill the void in air travel left when the legendary Concorde was retired from service in late 2003. But its developers have another goal in mind as well -- combining three different types of propulsion systems to make it considerably more eco-friendly than its predecessor.

Since 2006, engineers at EADS, the aerospace group that owns the airplane manufacturer Airbus, have been working on the design for French and Japanese clients. During a presentation delivered Sunday, one day ahead of the Paris Air Show opening at the Le Bourget airport, EADS CEO Louis Gallois stressed that all technical problems related to the project are solvable, but that it could still take 30 to 40 years before this vision became a reality. "We're not talking about a product that we launch in the next few years," Gallois said, according to news agency Reuters. "We have to see security, integration of different technologies, how man reacts to it."

Still, that says nothing about the costs involved. As Jean Botti, the head of technology and innovation at EADS, noted, everything depends on costs and whether buyers can be found.

Plans envision a jet that would climb to a height of five kilometers using turbofan engines powered by biofuel made from seaweed or algae. At that point, ramjet engines, which are usually found in rockets and missiles, would propel the plane above the atmosphere to an altitude of 32 kilometers in just a matter of minutes. There, it could maintain cruising speeds above Mach 4, or four times the speed of sound, using yet another set of engines. When preparing to land, the plane would switch back to its turbofan engines and glide to its final destination. "This is not an aircraft and not a rocket," Botti said, according to The Independent. "It is a commercial rocket plane."

The plane would be geared toward business travellers who could fly, for example, from European to Asian or North American destinations and back within the same day. Since it would only have a maximum acceleration of 1.2 G, the company says that passengers would hardly sense anything different from a regular flight and that they would not require any specific flight instructions.

A Bold Future, A Troubled Present

During its pre-show conference over the weekend, EADS also showcased a number of projects that it believes could revolutionize flight by mid-century. These include a plane with a panorama window and a short-distance plane known as the "Volt-Air" that would be powered by a lithium battery. There was also the Eurocopter X3, which has both wings and rotors and achieved impressive speeds of 430 kilometers per hour (267 miles per hour) in a test flight.

Despite all the futuristic design concepts, Botti still sees the most astonishing trends in materials. In fact, he said that aircraft manufacturers are witnessing a renaissance of aluminium and that he is convinced that aluminium alloys will make a comeback.

However, Gallois said he believes that this will only be the case for short- and medium-haul aircraft, and that long-haul aircraft will continue to use composite materials. He noted how advances in composite fiber materials had forced aluminium manufacturers to make considerable advances while reducing costs.

Excitement over new and potential EADS models was dampened on the weekend, however, when two of the company's key planes on display ran into trouble. A demonstration model of its double-decker A380, the world's largest passenger jet, broke off part of a wing tip when it hit an airport building while taxiing Sunday. And a gearbox problem will prevent the much-delayed A400M military transport plane from performing in an aerial display that had been scheduled for Monday.