If the European Federation of Pharmaceutical Industries and Associations (EFPIA) is driving the Innovative Medicines Initiative (IMI), then patient representatives are relegated to the passenger seat. The goal of the EUPATI Project is to help patient representatives better understand the drug approval process. A total of 18 pharmaceutical companies are participating in EUPATI, with more EFPIA members involved than in any other IMI project.

That doesn't come as a surprise to NGOs like the Trans-Atlantic Consumer Dialogue (TACD). The group fears the project may simply be a Trojan horse, an attempt to train patient advocacy groups to lobby for faster approval of medications. Like other NGO workers, David Hammerstein of TACD has been critical of IMI's inception. "It's unacceptable that, within IMI, patient representatives are trained by the pharmaceutical industry and that the EU is investing millions in a project that is further strengthening the already strong pharmaceutical industry lobby."

Many patient advocacy organizations live off the donations they receive from the pharmaceuticals industry. According to research conducted by SPIEGEL, patient organizations in Germany recorded more than 1,300 such donations in 2013 alone.

Project director Jan Geissler denies that EUPATI is turning patient representatives into ground troops for the companies. "Some people believe that we, as patient advocates, are influenced by pharmaceutical companies," he explains. "But we have never experienced a situation in which the industry has tried to influence us in inappropriate ways."

Geissler argues that patient representatives need the pharmaceutical industry's expertise on how medicines are developed and tested. "We want to have a say in the way in which clinical studies are designed and carried out," he says. "In order for that to happen, though, we need to be familiar with the processes."

But should this information be imparted by an industry with an agenda of its own? "The pharmaceutical industry conducts a major share of research into medicines and has expertise on many procedures," Geissler adds. "We need interaction between all participants. In order to ensure that the information we provide is objective, it is, among other steps, reviewed by researchers, our ethics committee and workers at the government agencies responsible for regulating drugs."

In 2012, the Cologne-based Institute for Quality and Efficiency in Health Care (IQWiG), which is responsible for assessing the benefits of medicines in Germany, quit the advisory board in protest. In a letter to Geissler, officials at the Institute criticized the project for pursuing a course that did not allow "us to fulfil the task assigned to us."

Anke Steckelberg, a member of IMI's Project Advisory Board, is also critical. She works as a research associate at the University of Hamburg and specializes in evidence-based patient information. "Courses for patient representatives actually provide an opportunity to encourage critical thinking -- including about the pharmaceuticals industry," she says. "But I doubt that works when those leading the courses come from the firms themselves," she says, arguing that it raises the risk that patients will be subservient to the interests of the pharmaceutical industry.

"We have repeatedly critically scrutinized our role in the project and long considered whether we should leave it," Steckelberg adds. "But we want to continue to be involved in something like this that is promoted with a lot of public money." 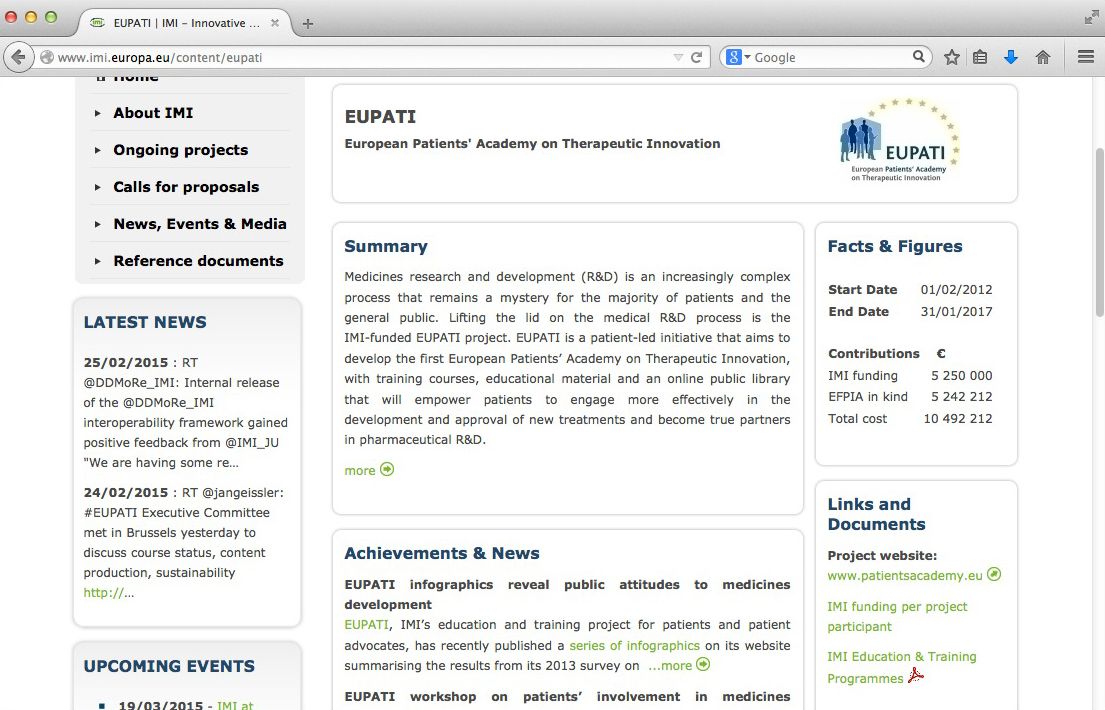