They arrived early in the morning in large teams and they raided numerous offices and private residences at the same time. In November 2006, the Siemens corruption scandal came to light with a major police raid -- an affair whose first chapter ended several days ago with a multibillion dollar settlement with the United States government. 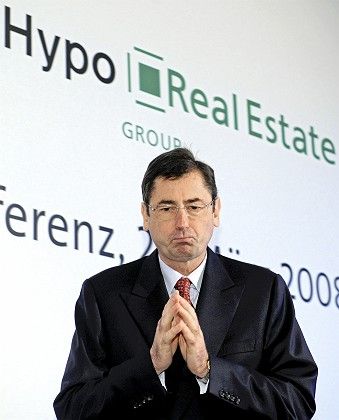 Former Hypo Real Estate CEO Georg Funke: What will remain of the company will be a shell of its former self.

As news came recently of the Siemens judgment in the US, it almost seemed like deja vu when investigators launched spectacular raids in what could become Germany's next great business scandal.

Yet again, dozens of investigators mounted simultaneous raids on numerous locations. But this time the investigations aren't into corruption. Investigators are looking into charges of speculation, market manipulation, breach of trust and deception, insider trading and incompetence among greedy finance managers at the Munich-based Hypo Real Estate, one of the German banks that has been the most deeply entangled in the finance crisis. The sums of money involved in this scandal far exceed those in the Siemens affair.

Just three months ago, the German government, the German central bank (Bundesbank) and several credit institutions agreed to provide HRE with €50 billion ($71.7 billion) in liquidity to prevent the bank's collapse and a chain reaction that would have hit other German banks. The government then had to provide an additional €30 billion in credit guarantees to the crippled bank.

The Munich mortgage lender, together with the Irish subsidiary Depfa that it acquired in 2007, had burned massive amounts of money through risky US real estate securities and other reckless business dealings. The company also appears to have covered up the scope of its misdealings. That, at least, is the assumption of public prosecutors who are now investigating HRE executives. According to the search warrant issued, prosecutors are investigating alleged "false statements," "market manipulation," and "breach of trust" by current and former members of HRE's board. In a six-page paper, prosecutors take a tough stance on managers. They claim they made "deliberately false statements" about the company's dramatic situation and that they were guilty of "deliberately concealing" important information and that they had violated their obligation to safeguard company assets.

Prosecutors believe that the company's former board withheld information from the public about the company's true state for more than a year. The Munich public prosecutor's office has also confirmed that it has been investigating the company since February for suspected insider trading among other things. According to several criminal complaints, HRE managers or their relatives and friends are accused of having sold large numbers of HRE shares before the company first warned of its financial woes on January 15. Share prices in HRE have hit rock bottom since the company's financial troubles hit the headlines.

In their search warrant, investigators claim the main reason for the company's current financial misery is that the board failed to take steps needed to restructure the company at the necessary time.

Contacted by SPIEGEL, a spokesman refused to comment on the developments. Other executives, however, have defended the company's leadership, saying it had not been given sufficient warning about the true state of HRE.

The former chief excutive, Georg Funke, 53, along with other top executives, has since been fired. The bank's new chief, Axel Wieandt, 42, who was hired in October, has just fired two other members of the management board and announced that by 2011, he will have to lay off more than half of the bank's 1,800 employees. What will remain of the company will be a shell of its former self -- and a raft of unanswered questions.

HRE's holiding company, HRE Holding, was only partially regulated under Germany's Banking Act. The country's banking regulator, BaFin, was in charge of supervising HRE's domestic subsidiaries in Germany and, together with its Irish colleagues, HRE's Depfa unit in Dublin. But it appears that nobody had a complete picture of what was happening at HRE. That led to a disastrous lapse in banking supervision. "So far, we have not been able to comprehensively oversee financial holding companies," a BaFin spokeswoman confirmed.

German lawmakers are now moving to change existing legislation. According to the latest amendment to German securities law, firms can voluntarily subject themselves to the rules and implement systems to reduce their risks. But experts are calling for tougher rules.

"HRE is to Germans what insurance company AIG is to the Americans," said one prominent banker. Both firms were long considered trouble-free, slumbering giants, but in the end, they have emerged as black holes in the industry in which billions in bailout money are rapidly disappearing. The casual approach that had been taken by management should have served as a warning signal long before. As early as May 2007, Michael Thiemann, the manager of HRE subsidiary Collineo, admitted, "You don't have the time to take a close look at each borrower." Shortly afterward, Collineo and Citigroup sold a massive package of highly complex property loan investments, of which almost half were US subprime mortgages.

Recklessness, bravado and greed were the hallmarks of the troop of executives surrounding Gerhard Bruckermann, who ran Depfa -- a company registered under Irish law for the financing of government projects -- before selling it to HRE in the summer of 2007.

Five years earlier he had moved important parts of the company, which was supposedly rock solid but whose management took too many risks, to tax havens in order to save on taxes.

Bruckermann rewarded himself and his management board for such creativity by raising the board's salary by 100 percent in 2003 -- to €20 million. He went on amass an even greater personal fortune: he is believed to have earned €100 million through the HRE deal.