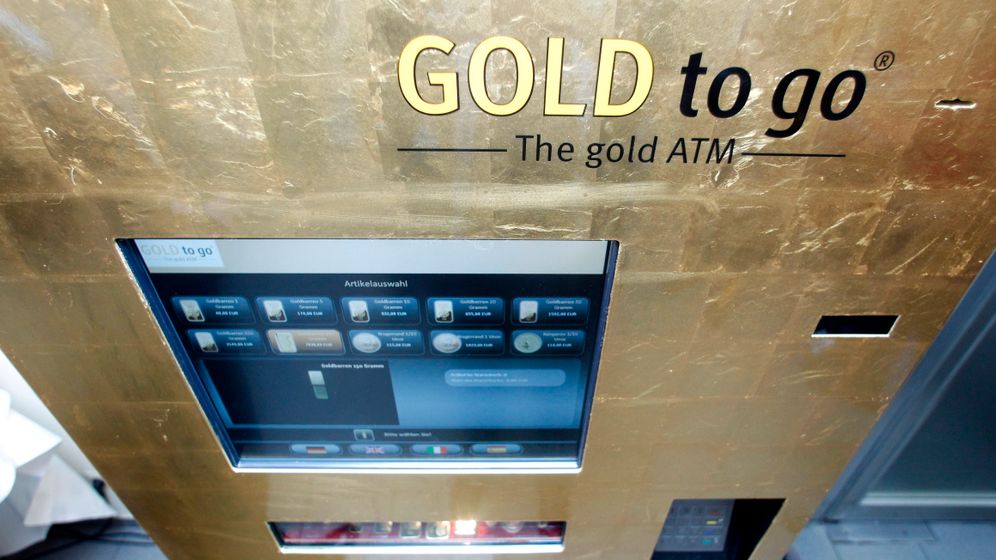 Photo Gallery: Cash In, Gold Out

For the cosmopolitan residents of Munich, the third largest city in Germany, automatic vending machines are a popular invention indeed. In nightclubs there are vending machines that dispense comfortable footwear for tormented, stiletto-wearing dancers. The "Med-o-Mat" near the Theresienwiese grounds, where the annual Oktoberfest beer festival is held, entices buyers with condoms, eye drops and pregnancy tests. And bicycle inner tubes can be obtained from a nondescript blue aluminum box on the banks of the Isar river which flows through the city.

And now Munich residents have a new and particularly innovative vending machine. Located on the city's Laimer Square is a 450 kilogram (992 pound) hulk of a machine, covered in gold leaf. The device, which was installed two weeks ago, plugs a very specific gap in Bavaria's self-service business: It is a vending machine for gold.

The machine dispenses real gold bars, weighing up to 250 grams (8.8 ounces) -- which, depending on the current price of gold, equals a quick investment of around €7,900 ($11,100). Customers can pay in cash or by credit card, and a gift box is included.

The heavily secured vending machine, which is located in the lobby of a Munich-based bank, is the most recent consequence of the global gold rush. Since prices for the precious metal have been reaching new highs on an almost daily basis, more and more small investors have been entering the market. They dream of fabulous returns at a time of meager interest rates. The price for a troy ounce of gold (equivalent to around 31 grams) has gone from $250 in 1999 to an impressive $1,350 today, and it's likely to rise even further. Banks have responded by reactivating gold storage facilities that had been closed for years.

German businessman Thomas Geissler has exploited the run on gold for his own unique purposes: He has given the world the gold-vending machine. Initially it was just meant to be a public relations exercise to promote his own online gold-trading business. Geissler set the first machine up inside a luxury Abu Dhabi hotel, the Emirates Palace, in May of this year. According to Geissler, the machine had soon dispensed gold worth half a million euros. Now Geissler's business is expanding.

The machines, which are armor-plated and cost around €35,000 each, can now be found in Germany in the cities of Augsburg, Essen, Wiesbaden, Pforzheim, Metzingen, Reutlingen, Nuremberg and Munich. They are located in shopping centers, in Italian fashion stores, in jewelers and in banks.

The most important criteria that needs to be taken into account when it comes to installing the machines is that they must be located in a place where no trucks can drive up to them, in order to prevent any safecrackers getting at them. According to their owners, the vending machines have so far seen turnovers of up to €350,000 per month, when demand is at a peak. In Bergamo, Italy, gold can be bought at a machine at the airport, while in Madrid a luxury hotel is home to one of the devices. Cruise ships are also being considered as locations for the machines.

"We are undertaking a massive rollout," enthuses Geissler, whose firm used to deal mainly in investment funds, real estate and olive oil. His company plans a total of 200 gold vending machines throughout Germany, Austria and Switzerland. And the conquest of the American market is due to start next month.

But does the world actually want gold vending machines? Geissler promotes his machines by saying that gold from them is less expensive than gold from the banks. His company promises that prices are updated every 10 minutes. Indeed, prices on the machines move up and down throughout the day.

But it seems there is a more important argument for the vending machines than a price advantage of a few euros. If one buys gold through a bank, the transaction can take several days, whereas with the vending machines, the gold is immediately accessible. "Money in, gold out," Geissler says. He also promises his clients anonymity: "People want to make purchases without the state keeping track of it."

This is why gold vending machines offer little of interest for professional investors. As with other goods, it is also true for gold that the bigger the bars, the better the price. Geissler believes the clientele for his vending machines will consist mainly of newcomers and small-time investors. According to him, gold from the vending machines could be seen "as a gift idea" and should also arouse "the desire to invest in precious metals."

And it seems that his clients see it this way too. Hardly had the gold vending machine in Munich been installed than passersby were pressing their noses up against the glass of the locked bank foyer where it was located. After a while, the security guard realized what they wanted and opened up to let one of the interested parties inside. The elderly man promptly purchased a gold bar that he planned to give as a gift at an upcoming baptism.

And should the baptized child not know where to put his golden gift, then Geissler can help out there too. In Metzingen in his home region of Swabia in southwestern Germany, he has invented what he calls the "Swabian Fort Knox" -- a high security storage facility that is guarded around the clock. The facility is intended for customers who want to store their valuable gold "outside the banking system."