A leading German newsmagazine has revealed this week that the country's national railway, Deutsche Bahn, spied on more than 1,000 of its own employees, including many top managers in recent years. The operation may have violated German privacy laws, but Deutsche Bahn says it was merely trying to uncover corporate corruption. 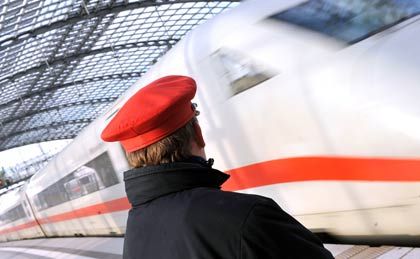 A Deutsche Bahn employee: More than 1,000 national railway workers and executives are believed to have been spied on.

According to the investigative report, published in this week's edition of Stern, Deutsche Bahn's snooping included many top managers as well as their spouses. The magazine cites what it claims are internal German railway documents.

The company allegedly hired Network Deutschland GmbH, the same private investigation firm used by Deutsche Telekom, which has come under massive criticism in the past year for spying on employees and journalists. Stern reports that Deutsche Bahn last used the company's services in 2007. The spying activities were reportedly carried out as part of an effort to uncover possible corruption within the company.

When Stern confronted Deutsche Bahn with the allegations, officials conceded that the investigations had in fact taken place. The company also admitted it may have violated the privacy rights of some of those investigated.

On Tuesday, Deutsche Bahn issued a statement claiming that the company's corporate auditing department had moved to investigate because it took evidence of possible violations of Deutsche Bahn's anti-corruption policies seriously. Final conclusions from the investigation have not yet been drawn, and so far there have been no indications that Deutsche Bahn employees were involved in any crimes.

"During the past 10 years, Deutsche Bahn was repeatedly the victim of the worst cases of business crime and corruption," spokesman Oliver Schumacher said according to a statement on the Deutsche Bahn Web site. "In the interest of all honest customers, taypayers and workers, Deutsche Bahn will continue to take whatever action it can within the law to put a stop to such behavior."

According to Stern, company documents state that Deutsche Bahn contracted the services of Network Deutschland in 2003 to determine whether top managers at the national railway and their spouses were involved in business transactions outside their duties at the company. Although there was no concrete suspicion, Deutsche Bahn reportedly provided the private investigators with a CD-ROM containing personal data on 774 members of management. It included their names, addresses and telephone numbers. The company also tracked down the names and telephone numbers of 500 spouses -- information not generally available in the company directory. They were able to collect the information through customer data because many spouses had registered to get the discount train tickets available to families of employees.

Deutsche Bahn reportedly launched a similar profiling investigation in 2002. Rather than focusing on a specific group of executives in that investigation, Network Deutschland was given a contract to probe ties between Bahn employees and companies that are suppliers to the national railway, Stern reported. Hundreds of people were reportedly profiled as part of the investigation. According to the documents obtained by Stern, detectives first looked up people's addresses and then expanded the investigation to include bank account information and data from telephone calls. According to Stern, 125 people were placed under increased observation.

The German government's commissioner in charge of dealing with privacy issues at Deutsche Bahn, Alexander Dix, has criticized the alleged spying. "We have found serious violations of the federal privacy law by Deutsche Bahn," he told the magazine. The government is now determining whether the national railway should be forced to pay any fines. "We cannot rule out the possibility that crimes were committed in some cases," he said, referring to the spying. "We are trying to determine whether we should refer this on to the public prosecutor."

According to Stern, the privacy protection office in Berlin compiled an eight-page report on Nov. 13, 2008 describing Deutsche Bahn's investigations, both general and more targeted. In one incident, the magazine reports the document as stating, "private money and account movements as well as travel and familial relationships" were investigated.

Deutsche Bahn says it "is totally wrong and absurd" to compare the spying cases with those of other German companies like telecommunications giant Deutsche Telekom, which was accused last year of spying on its own executives and journalists. Public prosecutors claim that Telekom spied on at least 60 people between 2005 and 2006, including members of the supervisory board, the executive board, members of the works council as well as journalists. An investigation last year also found that German discount supermarket chain Lidl had been hiring private detectives to investigate its employees' behavior.