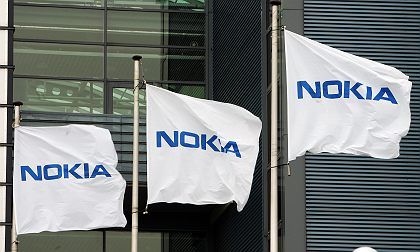 With their new 5800 model, Nokia aims to challenge iPhone dominance.

If being first mover meant anything, Anssi Vanjoki and his colleagues at Nokia would already rule the mobile Web. Way back in 1996, the Finnish company launched a prototype phone with a "dangerometer," which used software and satellite technology to match your location to an online database of crime statistics. If you strayed into a dodgy neighborhood, the meter would turn from green to red, and an icon popped up inviting you to buy life insurance online.

Vanjoki, a Nokia executive vice-president, chuckles as he recalls the farfetched idea. Yet he and his team at Nokia headquarters, on a quiet cove outside Helsinki, are convinced the day they've long hoped for has finally arrived. After a decade of false starts and half-kept promises, the Net is breaking free of its desktop chains and going mobile. "The next generation of the Web is going to be all about the small multimedia computer and not the PC," says Vanjoki.

There's increasing evidence that he's right. The number of people who use their phones to cruise the Web is surging worldwide, with the figure in the U.S. rising 36 percent over the past year, to 40 million, according to researcher Nielsen. Phones are getting better at handling data, their Web-surfing software is easier to use, and rates for mobile surfing are plummeting. In addition, wireless operators have loosened their grip on what customers can do with mobile phones, making it easier for people to install their own software and buy services from third parties. "The mobile Web is set to take off because the barriers are coming down," says Tim Berners-Lee, inventor of the Web and director of the standards-setting World Wide Web Consortium.

Tailored for Every Market

Vanjoki may have had an early vision of this emerging future, but lately Apple has led the way in realizing it. The company's iPhone, with its iconic touchscreen design and near-magical software, has turned millions of U.S. users on to the mobile Net. Just a year after debuting its first phone, Apple has snatched the spotlight from Nokia and rivals like Research In Motion.

Now, Nokia is striking back. The company is launching its first mass-market touchscreen phone this month. The 5800 will have a shape and screen similar to the iPhone, but its price will be about a third less than the Apple device. In addition, the Nokia phone will come with a year-long music service subscription that will let customers download and keep all the music they want from the four major record labels. Nokia plans a steady stream of touchscreen phones in the coming months, an effort aimed at overwhelming Apple and others with devices for different customer segments and price ranges in local markets around the world. "We're able to do this faster than anyone else," says Vanjoki. "We have a localizing machine that spans all countries."

That's easy to forget with all the euphoria surrounding the iPhone. Nokia is still far and away the biggest and most influential player in this industry. The iPhone may win the hearts and fill the pockets of jet-setters and gadget hounds, but they're a relatively small group. Nokia will sell nearly half a billion handsets this year -- 50 times the number of iPhones Apple hopes to sell. The Finnish company already is well entrenched in the chaotic streets of Lagos, the rice paddies along the Ganges, and in factories and schools from São Paulo to Shanghai. Its phones are ubiquitous in areas where people have never heard of Apple.

So for much of humanity, it will be Nokia, far more than its American rivals, that will define the mobile Net. "We touch so many consumers," says Vanjoki. "They expect Nokia to offer them new things."

The company has been forced to look beyond its own borders. With Finland's population a mere 5 million, Nokia hasn't had the luxury of relying on its domestic market, as Apple can. And the Finns have succeeded in their globe-trotting adventures to an astonishing degree. In the past 15 years, Nokia has transformed itself from a near-bankrupt producer of rubber boots and forest products into a tech juggernaut with $79 billion in revenue.

Vanjoki, a chiseled 52-year-old, embodies the raw determination that makes Nokia such a force. An executive vice-president for Nokia CEO Olli-Pekka Kallasvuo, Vanjoki oversees marketing, production, and relationships with telcos and other customers. Executive swagger is a no-no at collegial Nokia, and Vanjoki is careful not to present himself as its sole visionary. But like Nokia, he is seriously competitive. He plays on Finland's over-50 basketball team and relaxes by hunting bear in the forests north of Helsinki. Other hobbies include riding his motorcycles, a Harley-Davidson and a Triumph.

Vanjoki started the effort to put Nokia at the heart of the mobile Net in earnest in 2004 when he led the launch of Nokia's high-end Nseries phones. The handsets were the first that tried to address all of a customer's digital needs. The latest models come with high-resolution cameras, music players, GPS, and as much power as laptops had a few years ago. Says Vanjoki: "Inside Nokia, I have been the face of convergence."

The question is whether Nokia can deliver on the promise of the mobile Net before the opportunity is snatched away by competitors. In addition to Apple, Google is poaching on Nokia's turf. The search giant helped develop a new operating system for mobile phones, called Android, to make sure it can get its search and advertising services on mobile phones. Wireless operator T-Mobile launched the first Android-powered phone in the U.S. on Sept. 24. In addition, RIM, after making its BlackBerry the must-have gadget of the business world, is now going after consumers.

Vanjoki and his rivals agree on one thing: The mobile Net will belong to those who best anticipate the new ways people will use it. What sites will they visit? What information will they want? Although Nokia conducts exhaustive consumer surveys, an article of faith at headquarters is that numbers tell you only so much. Vanjoki makes it a point to prowl the world's shopping districts himself, anonymously and alone. One favorite haunt is the sprawling Mall of America in St. Paul, Minn. "It keeps me sane," he says. "You get to meet normal people, not only boring executives."

You also learn a lot. During one mall visit a decade ago, Vanjoki saw young people carrying phones they had decorated themselves. That led Nokia to start selling sell snap-on covers in multiple colors and patterns, which became a huge hit. It also alerted Nokia to a broader development: Mobile phones were becoming fashion items. The company put more emphasis on design, an important step in boosting its share of the global mobile-phone market to 40 percent.

On a recent Monday morning in Düsseldorf, Vanjoki took a few hours before business meetings to bum around the city's main shopping district. At an electronics discounter, he eavesdropped on an elderly woman as she questioned a sales clerk about a home wireless network. Vanjoki scribbled in a small black notebook as she carried the gear to the checkout -- more evidence that seniors are savvier about technology than most people think. Vanjoki nodded toward a young man wearing a baseball cap and dark glasses: "Look at that guy -- he has five gadgets hanging from his neck." Confirmation, for Vanjoki, that young people stay connected wherever they are.

Trips like this inspired Vanjoki and his colleagues to work up a few basic principles for the mobile Net. For starters, in the developed world, mobile devices will be extensions of -- rather than replacements for -- PCs. Consumers will want to access their favorite sites and services whether they're at a desk, in an Internet café, or walking around. As a result, Nokia is pouring research and development resources into its Ovi Web site, which lets people share music, photos, and videos among PCs and mobile devices.

In many emerging markets, the situation will be differentmobile phones will be the only way for most people to get on the Internet. So the devices need to be better at a wide range of activities. In India, where Nokia has more than 50% of the mobile phone market, the company already offers mid-range handsets with maps, e-mail, and up-to-date local weather.

While Nokia had been fiddling with services customized for a phone's location since the 1990s, Vanjoki says its full importance first dawned on him one day in 2002 while wandering in a Finnish forest. He carried an early GPS device with a tiny animated human figure that illustrated the user's position. Watching the walking figure, Vanjoki had an epiphany that where people are -- what he calls "context" -- is central to everything else. He quickly called his office to dictate some thoughts on how Nokia could capitalize on this idea.

Nokia showed how much it believes in context by agreeing to pay $8.1 billion for Chicago-based Navteq, a provider of data on the world's streets and cities for use in electronic navigation. The deal, Nokia's largest ever, closed in July. Today, Nokia is the world's largest maker of GPS devices and sells subscriptions for voice-navigation assistance to drivers and walking directions to pedestrians.

But that's only the first part of what Vanjoki envisions for mapping. Using data they collect with GPS handsets, people will begin to create virtual maps of their lives. It's already starting to happen. Last year, Nokia posted a prototype of Sports Tracker, a free application for runners and other athletes that uses a GPS phone to record their training. A million people downloaded the program, which quickly morphed into a way for users to create online diaries and share photos of their whereabouts. Nokia rebranded the program as viNe for athletes and others, underscoring how the mobile Web is evolving more by user creativity than corporate decree.

Already, Vanjoki is thinking ahead to 2015, imagining how the world around us will mingle with the virtual reality in our pockets. It sounds esoteric, but Nokia's long-term rivals caution against taking the company lightly. "Never underestimate the Finns," says Carl-Henric Svanberg, CEO of rival Ericsson. "They may not come across as aggressive in their comments, but they are in their actions."