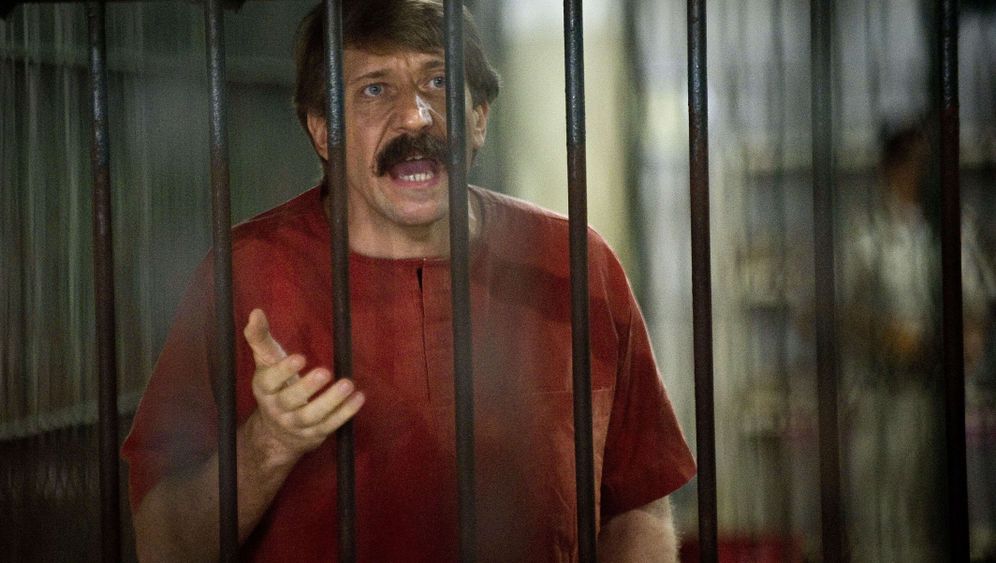 Alleged arms dealer Viktor Bout, 43, has been in custody in Thailand for the past two and a half years. The Americans have been pushing for the Russian to be extradited so they can try him on charges of " conspiracy with the intent to kill American citizens" and the "support of a foreign terrorist organization." Now Thai judges have removed the last obstacles to his extradition. As of Friday evening, the only thing missing was the prime minister's signature. If Bout actually does have to appear before a New York court, his wife Alla, 46, will follow him to the US . Throughout his detention in Thailand, she has fought tenaciously for her husband's release. During an interview with SPIEGEL correspondent Thilo Thielke, Alla Bout spontaneously invited the journalist to sit together with her, her husband and the Russian consul during the decisive extradition hearings. The proceedings were delayed for over an hour because there was no Russian interpreter -- offering an opportunity for Bout, who remains confident and defiant, despite wearing shackles and a prison uniform, to explain his view of the allegations to SPIEGEL.

SPIEGEL: You are an arms dealer who is wanted around the world, a view which is also shared by the United Nations. A former British minister called you the "merchant of death." There was an Interpol warrant for your arrest. You are accused, among other things, of delivering arms to warring factions in Afghanistan, Congo, Angola and Liberia.

Bout: None of this is true. The Americans presumably believe that Hollywood film "Lord of War." There has been an outright witch hunt against me. The Americans have destroyed my business and my family. And they have taken away my money.

SPIEGEL: Who do you expect to believe that? UN investigations in Angola have shown that you supplied both factions in the civil war with arms. In Rwanda you allegedly armed rebels and government troops. And you purportedly supplied Liberian dictator Charles Taylor with arms.

Bout: This Africa business has been blown entirely out of proportion and they have made a mountain out of a molehill there.

SPIEGEL: Have you dealt in arms? Yes or no?

Bout: I have transported arms. I transported arms for the Angolan government. I flew arms to Congo-Brazzaville. In the mid-1990s, I flew -- only transported, not sold! -- arms to the Afghan government of Ahmed Shah Massoud and Burhanuddin Rabbani. I also transported French troops, to "Opération Turquoise," for example ...

SPIEGEL: … that was in 1994 during the genocide in Rwanda, when the French de facto secured the retreat of the Hutu refugees to the Congo …

Bout: … and I even flew French troops to a maneuver with the Germans. What could be wrong with that?

SPIEGEL: You act as if you are innocent as a lamb. With all due respect, SPIEGEL investigations also substantiate your role as an arms dealer in countries with UN arms embargoes.

Bout: Why then, for example, should the Rwandan government have purchased arms from a young fellow like me at the time? They can officially purchase arms from other governments.

Bout: It's risky, in any event. You can't secure any loans to finance arms purchases. And if the recipient ultimately decides not to pay, who do you intend to sue for your money? I can't set up a booth on the market square in Bangui in the Central African Republic and hawk arms. On top of that, the Africans frequently sell to each other: The Angolans have sold arms to Congo, and to Rwanda. Russian arms are a rarity in Africa. They are too expensive for the Africans. Instead, there are quite a lot of Chinese Kalashnikovs. Many weapons are ancient and rusty.

SPIEGEL: You have nevertheless admitted to delivering arms to the government of Angola. Have you never had misgivings about how this fueled a civil war?

SPIEGEL: You allegedly also delivered arms to the Taliban.

Bout: The Americans have no proof of that. I have never done business with the Taliban. The Russians also would have never accepted that. They hate the Taliban. I tried to help Ahmed Shah Massoud of the Northern Alliance. The only time I had contact with the Taliban was when a Russian crew was abducted by the Taliban. The hostages overpowered their kidnappers on the runway and were brought out by us following lengthy negotiations -- along with the captured Taliban.

SPIEGEL: You have also allegedly supported the rebel leader and alleged war criminal Jean-Pierre Bemba, who is currently on trial at the International War Crimes Tribunal in The Hague. His troops are accused of murder, rape and torture.

Bout: Bemba has done nothing wrong. He is my personal friend; he is not a killer. But he also had a problem with the Americans, who have suddenly dropped him.

SPIEGEL: And you didn't deliver any weapons to Bemba?

Bout: No. I delivered replacement parts for helicopters.

SPIEGEL: Our witnesses tell a different story here as well. But the African business has definitely been worthwhile for you?

Bout: After two or three years, I made the break-even point. But in 2000, 2001 business went downhill again. That's when the UN report was published …

SPIEGEL: … in which you are accused of arms trafficking.

Bout: An amateurish report that was primarily written by a Belgian employee of a small non-governmental organization. No experts whatsoever contributed to this paper -- no police, no diplomats. The report is amateurish, but it had an enormous impact. I suddenly became persona non grata everywhere. That spelled the end of my transport business.

SPIEGEL: It's said that you still own Air Bas, a company which may have transported gold for the Taliban.

Bout: I know nothing about the Taliban. Air Bas doesn't belong to me, either; the firm belongs to my brother Sergei.

SPIEGEL: You may soon have to face charges in a New York court …

Bout: … which will be a farce, a show trial like in Russia under Stalin or in Nazi Germany. The verdict has already been decided. Do you believe that the Americans have invested so much money to get me, only to turn around and let me go again? I don't.