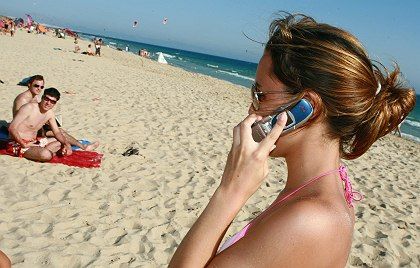 The EU has already slapped caps on roaming charges, now it wants to cap the cost of texting abroad too.

SPIEGEL: Ms. Reding, this week the European Commission wants to decree further price caps on Europe's telecoms companies, at your urging -- for example on the cost of sending SMS messages abroad. Why does Brussels keep intervening in this market?

Viviane Reding: Unfortunately I have to swing the regulation club again because the mobile phone industry is still so stubborn. Last year the European Union cut the completely exaggerated roaming for mobile phone calls abroad by an average of 60 percent. We then made it very clear to the mobile phone operators: Sending data overseas, whether SMS, e-mails, mobile Internet, you are making money on people crossing borders and that has to change! Nothing has happened since then. So in Europe there is no common market for consumers.

Reding: We are going to set a cap of 11 cents for each text message sent abroad. Up to now a German who is sending a text from (the Spanish resort island of) Mallorca has to pay 60 cents and someone from Belgium has to pay up to 80 cents -- whereas at home that is usually between 8 and 10 cents. The costs dont even begin to justify these high prices. That is why we are now putting an end to the rip-offs!

SPIEGEL: Are you going to also correct the way the operators charge their bills?

Reding: Yes, because consumers are also being short-changed here. Telecoms always calculate calls within a country to the exact second. However, any one who makes a call abroad has to pay for each minute that has started. On average that leads to a surcharge of 20 percent -- for something that the customers has not actually consumed at all. That is why bills will also have to be calculated by the second in roaming.

SPIEGEL: What about mobile Internet?

Reding: That can cost a fortune abroad. If someone in Germany downloads two or three SPIEGEL ONLINE articles onto their mobile, let's say a megabyte, then that would cost around 15 cents. If the same person did that abroad the cost would be between €6 and €11. A German holidaymaker just wrote to me to saw that he was in Austria and had used his iPhone as often as he would at home. It cost him €11,000 ($16,153). There has to be more competition here and particularly greater transparency. That is what we are working on.

SPIEGEL: Will you find a majority for that among the 27 member states and in the European Parliament? 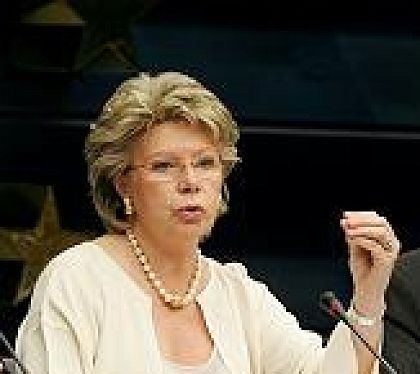 Reding: I am from Luxembourg, which makes me a political realist. The draft proposal has been checked through and has been discussed with each country. It should come into force in the summer of 2009.

SPIEGEL: And because you are taking them on so fiercely over roaming you want to make it up by handing them broadcast spectrum that the TV companies used to own and have now become free due to digitalization?

Reding: What rubbish. I am only concerned with the citizens not with any particular industry. Nothing is going to be taken away from the broadcasters. And radio broadcasters will get what they require for new channels and high-definition TV. However there cannot be a situation where entire stretches of land in Europe have no access to new technologies. Only 58 percent of Germany has access to broadband Internet. In the states that were formerly part of East Germany, and also for rural areas in Bavaria or North Rhine-Westphalia, that is an economic and social catastrophe. With the extra spectrum it will also be possible to also offer wireless broadband in remote areas.

SPIEGEL: So you really trust the mobile phone operators to provide these services in rural areas once they have the frequencies?

Reding: I trust the German politicians who can, of course, impose conditions on the awarding of spectrum.

Reding: Our guidelines are: Create broadband for everyone, make sure the population is covered! It is important to me that the problem is laid on the table politically. When I started on this four years ago, the German politicians said to me in unison: There is nothing more to distribute. That was because they had already distributed everything without asking themselves: What does the country need?

SPIEGEL: When it came to drawing up a new state broadcasting treaty, which should regulate what (public broadcasters) ARD and ZDF could do on the Internet, you were in constant disagreement with Germany. Is the dispute over the final version of the regulations now over?

Reding: In my nine years as media commissioner I have done more work with Germany on this point than with the other 26 members combined. I was, therefore, extremely pleased to see that ZDF boss Markus Schächter had invited the BBC Director General Mark Thompson to make the keynote speech at the IFA media trade show. It seems that Germany now sees the BBC model as the ideal. Hallelujah, now we have it. If that is the case, then the problem will finally be solved, because we have no problem with the BBC model in the United Kingdom. That is because there is always very transparent financing at the BBC.