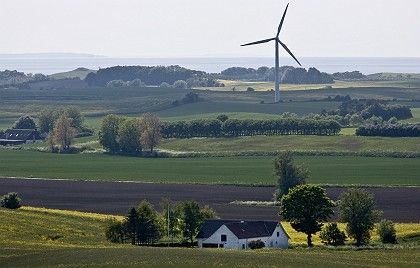 A windmill rises over farmland on the Danish island of Samso.

Three years ago, if you had asked a person from Denmark the secret to happiness, you probably would have gotten back a blank stare. The same question today, however, likely would be answered with knowing laughter and any one of several explanations.

Being recognized as the world's happiest people simply takes some getting used to.

Since 2006, Denmark, a largely homogenous country of 5 million people on Europe's stormy northern coast, has been anointed the happiest place on earth by two very different surveys. The studies' findings have upended dated international perceptions of Denmark as a quaint but chilly dairy exporter with a high suicide rate, recasting the country instead as a model of social harmony that is thriving in an era of globalization.

The country's improbable new standing -- and the significant media attention it has engendered -- may have had an even more profound effect on the Danes themselves by prompting a national conversation about how they live their lives. "It has given us a chance to reflect on how well-balanced a country we really are," says Dorte Kiilerich, the managing director of VisitDenmark, Denmark's official tourism organization.

In early 2006, Denmark was what it had been for ages: a quiet, stable country, better known as the home of Hans Christian Andersen, Tivoli Gardens, and the setting for Shakespeare's Hamlet than for being an epicenter of bliss. Tourism had been in decline for a decade, and an international controversy was raging over a series of cartoons depicting the prophet Mohammed, which months before had been printed in a Danish newspaper.

Then in July of that year, a researcher at England's University of Leicester released a ranking of the world's happiest countries after analyzing data from various sources. The report concluded that economic factors related to health care, standards of living, and access to basic education were determining characteristics of a nation's overall attitude. Denmark, with its free universal health care, one of the highest per-capita GDPs in the world, and first-rate schools, came in first.

The news spread quickly. Niels Martiny, a 26-year-old social anthropology student at the University of Aarhus in Denmark's second-largest city, spent last year in Peru doing research. Even there, word about the survey had gotten around to locals. "They were quite surprised," Martiny says with a laugh. "They had this idea about Nordic people being very reserved and very serious."

Foreigners weren't the only ones scratching their heads at the results. Danes were equally confounded. "A lot of my friends were surprised," says Martiny, who considers himself quite happy in his own life but thought that the study must have made some mistake. Danes, he says, tend not to express their emotions outwardly the way people in some other cultures do.

But the results were no fluke. Earlier this summer, the Stockholm-based World Values Survey, which uses a very different methodology, reported that it also found Danish people to be the world's most contented. That study concluded that the surest measures of a country's well-being are the freedom to choose how to live one's life, encouragement of gender equality, and tolerance for minorities. Once again, on every count, Denmark took top prize.

What is it about Denmark that the rest of us have failed to grasp?

Achieving the right balance is probably what most sets the country apart, suggests VisitDenmark's Kiilerich. Happiness in most Nordic societies, all of which ranked high on both studies' lists of happiest countries, hinges on an ineffable combination of economic strength and social programs. Denmark's approach relies on high taxes and aggressive redistribution of wealth --anathema to many free-market Americans -- which results in a broad range of social services like health care, retirement pensions, and quality public schools. Yet remarkably, the country has managed to make this model work without crushing economic growth or incentives to succeed. "Denmark has a head and a heart," Kiilerich says.

The strong social safety nets that cradle Danish citizens from birth until death are welcoming to foreigners, too. Kate Vial, a 55-year-old American expat who has lived and worked in Denmark for more than 30 years, passed up opportunities over the years to return to the U.S., choosing instead to raise her three children in Denmark. Vial knows she will never be rich, but says that she valued family, the ability to travel, and simple economic security above all else. "I just chose a simpler lifestyle, one where I could ride my bike all over and where I don't have to make a great living to survive," she says.

Some people attribute the prevailing attitude among Danes to something less tangible, called hygge (pronounced "hooga"). Danes say the word is difficult to translate -- and to comprehend -- but that it describes a cozy, convivial sentiment that involves strong family bonds. "The gist of it is that you don't have to do anything except let go," says Vial. "It's a combination of relaxing, eating, drinking, partying, spending time with family."

Whatever the reasons for Denmark's apparent happiness, the two studies clearly indicate it must be doing something right. Economic strength and social support aside, Kiilerich says that there is just something in the blood of the country that other Scandinavian countries are missing. "Our neighbors love us for it, but they just can't get it," she says.