The banks are blackmailing us, Sigmar Gabriel, the head of Germany's center-left Social Democratic Party wrote in a position paper for his party. But with the fuss over Gabriel's partly justified and partly exaggerated claim, one hopes that the most important words spoken last week will not get lost in the noise.

Those words were from Sandy Weill, who for eight years was the decisive figure at Citibank, the major American bank. This is the same Sandy Weill who forged a financial empire and successfully fought against just about every regulation that has been thrown at the banking sector. His message today? Split up the massive banks.

What Weill is calling for is a return to rules that already once served the world well. They were conceived during the 1930s financial crisis and then disposed of during the liberalization frenzy of the 1990s.

The Glass-Steagall Act is the name of the law that divided the banking world into two categories.

The first is banks that are dedicated to the classic business of managing customer deposits and issuing loans making them systemically relevant. These banks must be protected and, in an emergency, rescued by the state.

The second is investment banks, which too often have no problem at all with any risky business that comes its way as long as it promises to deliver profits. Weill believes that if things go awry at the investment banks that no one should be too quick to bail them out. These banks would be smaller and no longer the financial Goliaths that they are today. What is deemed too big to fail, would be deemed too large to even be allowed to exist in the future.

America, as well as the entire financial world, is discussing Weill's proposal.

And not without reason, either -- after all, the US banker was one of the people who pushed Bill Clinton in 1999 to repeal Glass-Steagall. He even has a plaque in his office celebrating himself as "The Shatterer of Glass-Steagall."

The proposal still doesn't have enough backing, despite support in many quarters including those in a number of Germany's top boardrooms, such as reinsurance giant Munich Re, whose chairman, Nikolaus von Bromhard, also wants to eliminate the design flaw. The SPD's Sigmar Gabriel wants to as well.

Objections have been raised from all sides (including the editorial staff of SPIEGEL's business and economics desk). They argue, for example, that the case of the Lehman Brothers bankruptcy shows that nothing can be radically changed. Eventually, the investment bank, whose collapse triggered the financial crisis, should have been rescued in some way or other, they argue. That may be true, but only under the current system.

If a strict division of banks had been in place, it is highly unlikely that Lehman would have been able to drag the entire financial world along with it into the abyss. And, yes, such a division would create problems for an institution like Germany's Deutsche Bank, which as both an investment and commercial bank would be forced to pursue a new business model. Still, the advantages by far outweigh the disadvantages.

So far, any halfway sensible reform of the financial world has failed because of opposition from Wall Street, the City of London or political forces like Germany's business-friendly Free Democratic Party. Politicians still believe they can honor their pledge to stop the kind of banking excesses that led to the crisis, but so far nothing has happened.

It may be true that the old dual banking rules wouldn't be able to function today as they were written decades ago, but they could be adjusted to fit with the current financial world. It would require craftsmanship, but it could and must happen quickly.

Incidentally, the Glass-Steagall Act was only made possible because a Senate committee had exposed the dumb, risky and at times criminal behavior of banks in the run-up to the Great Depression. The outrage paved the way for the law. Sometimes history repeats itself. Glass-Steagall served the world well for decades and it would have been better if it had never been repealed.

It is high time to correct this error. 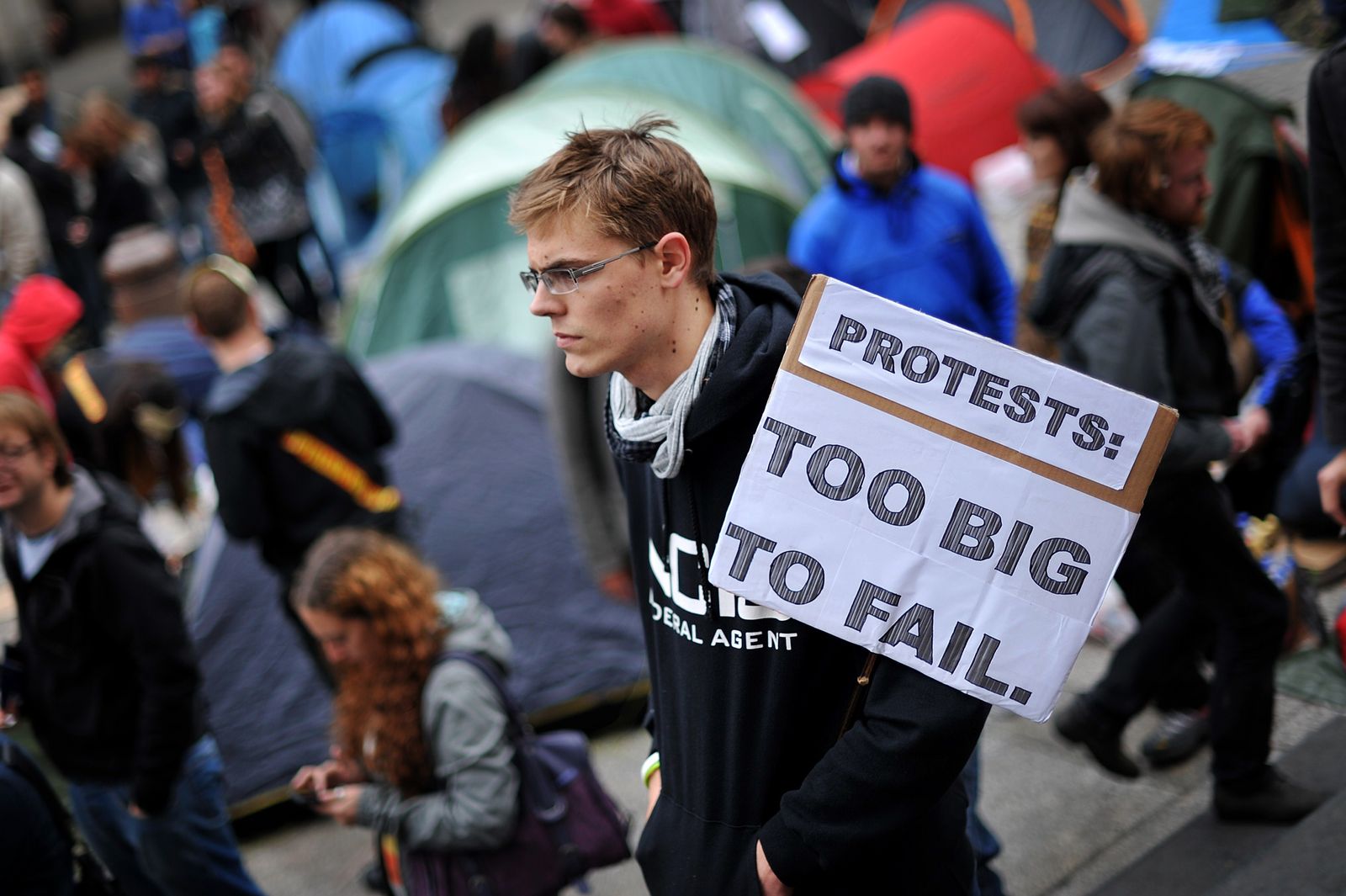 A demonstrator at a 2011 day of global protest in London: Banks should not be allowed to get too big to fail.