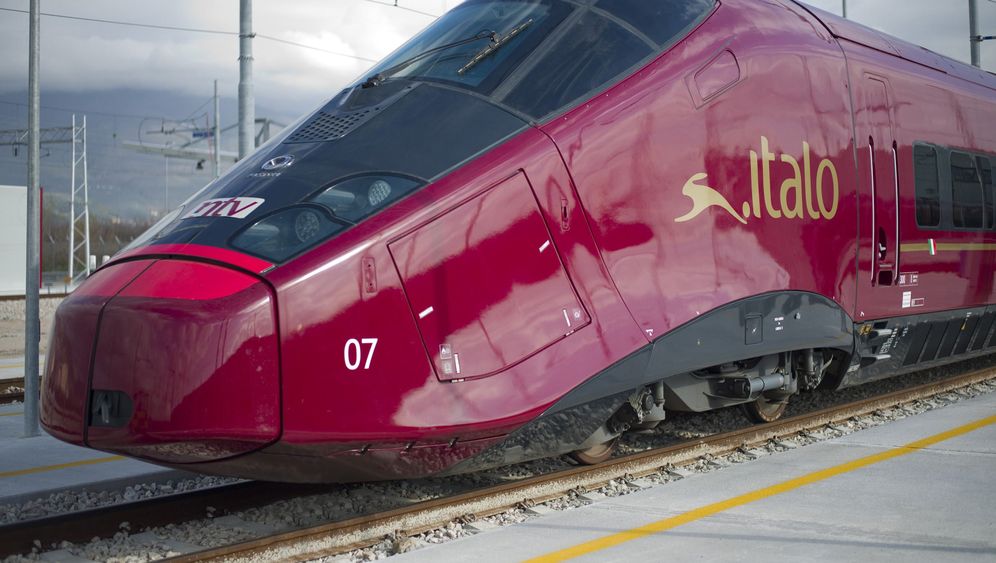 The burgundy red Italo train departs Naples Central Station punctually at 2 p.m., with rain pouring down from the sky. Within a few minutes, it is trundling past backyards at 160 kilometers per hour, then gathers speed. By 2:14 p.m., the train is whizzing along at 200 km/h and reaches 260 just a few minutes later.

The ride is quiet and smooth, and the only indication of the high speeds at which we are traveling are the large LED signs in the cars. By 2:16 p.m., we're up to 300 km/h (186 miles per hour). The train has no locomotive and the motors are equally distributed throughout each car, making for a quieter ride. The train is also capable of traveling at speeds of 360 km/h -- the only problem is that Italian tracks aren't built to support such high speeds.

The rain has now stopped, leaving the wet streets full of puddles. Clouds of water spray can still be seen behind cars on a motorway that runs parallel to the train tracks for a stretch. But the cars only remain in sight for a few seconds -- we're too fast for them.

As the others drive along in the rain, we sit in this Ferrari of a train reading newspapers, typing on laptops, iPads and smart phones. The train features free WiFi and also offers UMTS capacity for mobile phones. Fiberglass cables connect each car with the satellite antenna, which ensures a clear signal for communications, even as the train passes through tunnels. The Italo even features its own Internet portal, replete with information about museums, places of interest and shopping destinations at the train's next destination.

Three-Course Meals Served at Your Seat

In the last car of the train, called the "Club" section on the Italo, first-class customers sit in an area with wide seats and lots of legroom. Two compartments are also offered for families who want to travel together or where business people can hold meetings. In "Club" class, coffee is served and newspapers are distributed. Each seat has a touch screen with which the passenger can watch live television or a selection of films.

A three-course meal costs between €18 ($23) and €22. Meals are served not only in first class, but also in the "Prima" class, which is the train's business class offering. Courses are served directly at the passengers' seats. The train's developers found in studies that dining cars are no longer in fashion in Italy, where passengers prefer not to leave their baggage unattended. And passengers who would prefer a more peaceful ride can also reserve a seat in the "Relax" department, where mobile phones must be shut off. In a country known for loud train passengers whose telephone calls can seem endless, this feature could be a godsend for many.

In the "Smart" class, this train's version of coach, no three-course menus or coffee are served at passengers' seats. Instead, snacks and drinks must be purchased from vending machines. On longer trips, a movie car is also provided, although passengers must pay an additional fee to watch films on overhead flat screen TVs. But the seats are comfortable and the windows much larger than on other similar high-speed rail offerings currently available in Europe.

The private train is also easier on the wallet: A single trip from Naples to Rome can be as inexpensive as €20. A trip on the high-speed offering by Trenitalia, Italy's national railway, is slightly slower than the Italo on this particular stretch and costs nearly double that price. The only comparable price available on the national railway is on a train that takes almost twice as long. Italo is also far cheaper than driving a car the 221 kilometers from Naples to Rome, which will set a person back at least €40 for motorway toll fees and gas alone. Without any traffic jams -- and that is seldom -- the trip by car takes about two and a half hours.

At 2:32 p.m., the LED sign shows the train humming along at 300 km/h, whizzing past meadows and fields. Farm houses pop up on the landscape here and there, but disappear just as quickly. As trains traveling in the opposite direction pass by, you can barely hear them through the thick windows. In other high-speed trains around Europe, passing trains often create a bang, almost like an impact as they go by. But the Italo is well insulated and, in environmental terms, is on the right path. Because the train is lighter than its high-speed competition, the Italo consumes 10 percent less energy. It also travels much more quietly.

The work in developing Italo began four years ago. At the time, Ferrari chairman Luca Cordero di Montezemolo (hence the nickname) and luxury shoe king Diego Della Valle of Tod's and a handful of other prominent Italian industrialists and financial institutions founded Nuovo Trasporto Viaggiatori (NTV). French national railway SNCF, which operates the TGV, also holds a 20 percent stake. The trains to be used by NTV were then developed and built by the world leader in high-speed trains, France's Alstom, which developed the TGV, and is for the first time introducing its successor, the AGV, in passenger service with the Italo.

"We have brought an end to one of the longest monopolies in the history of our country," Ferrari and NTV Chairman Monetzemolo said on Monday. "Finally, Italian travelers and tourists can choose."

Service from Milan to Naples

Seven trains have already been produced and 25 are expected to be built by autumn. They will be deployed on Italy's most important north-south train line running between Milan, Bologna, Florence, Rome and Naples. Some trains will also travel to Venice in the north and Salerno in the south. In total, the company plans to offer 50 trips a day, attracting between 8 million and 9 million passengers a year and breaking even by 2014.

"We have the best Italian food on board, great films and a car for relaxing," Monezemolo said. "I have never seen a train like it before."

In addition to using the most modern technology available throughout the train, at the crux of the concept for the new train is also highly individualized options for comfort and price. Passengers can choose between luxury on the trip between Milan and Rome at €130 or they can choose more Spartan seats and amenities at €45 euros. The trip takes three hours and 11 minutes, plus an additional 13 minutes from the station used by Italo to the city center. In both Milan and Rome, the train uses alternative stations that are still located close to the main attractions.

On this highly popular route, state railway Trenitalia's trains are faster by a few minutes, but considerably more expensive, with the lowest ticket price at €79. Alitalia still flies between Milan and Rome for €214, but high-speed rail has made the route an unprofitable one.

At 2:41 p.m., the train passes a stone quarry at 300 km/h before driving at full speed through a tunnel. The train remains quiet. At 2:42 p.m., the running gag of this trip has returned, with the next appearance of a motorway on the right, where the cars look like absurd snails in tin shells as we whiz past.

At 2:50 p.m., the Ferrari on rails starts slowing down, and within three minutes we're back at 200 km/h. At a speed of 180 km/h, we travel past the La Rustica and Togliatti train stations in suburban Rome. Finally, at 2:58 p.m., and even a few minutes early, we roll into Rome's Tiburtina station. It's actually a shame the journey has come to an end, less than an hour after it began.