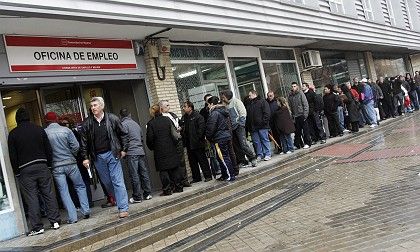 Looking for work: Young people are joining the queues at Europe's job centers.

On paper, Jerome Delorme seems like a pretty desirable job candidate. The 23-year-old has a master's degree in European studies from the prestigious Sciences Po university in Grenoble -- once a sure ticket to a top company, even in hard times. And he spent a year studying in Dublin, speaks fluent English, and has already had several high-profile internships. But in three months of looking for work, Delorme has been able to land only another internship, at a nonprofit organization. "The crisis has made getting a real job very difficult," says the native of the southern French city of Valence.

Delorme is typical of Europe's Gen Y these days. Most of his friends are also pounding the cobblestones in search of employment -- as are about 5 million other young Europeans, or about 20 percent of the under-25 population, the European Union estimates. That's nearly a third higher than a year ago and well above the 8.9 percent unemployment rate for the EU as a whole. In some countries the situation is far worse. Nearly 37 percent of Spain's Gen Yers can't find work. In France, it's 24 percent, vs. 17 percent in the US.

Policymakers worry prolonged unemployment will hurt an entire generation's ability to compete in the workplace. When the economy finally recovers, many of the under-25s will have become over-25s, and younger rivals will be nipping at their heels for entry-level jobs. The big fear: Europe's Gen Yers will suffer the fate of Japan's Lost Generation -- young people who came of age in the recession-wracked 1990s but lacked the skills to find good jobs even after the economy started to pick up steam.

If that happens, the Continent would struggle to cope with large numbers of jobless young people. Violent protests over lousy job prospects earlier this year in Eastern Europe made politicians acutely aware of mounting social problems. "Most countries are moving in the right direction, but there's still a risk that unemployment will last for years," says Stefano Scarpetta, head of employment analysis at the Organization for Economic Cooperation & Development in Paris.

Governments are spending billions to keep the young busy via college grants and vocational courses until the economy recovers. On June 29, British Prime Minister Gordon Brown unveiled a $1.6 billion (€1.1 billion) scheme to create 100,000 jobs for young people, with a special emphasis on helping those who've been out of work for more than a year. And on April 24, French President Nicolas Sarkozy announced a $1.9 billion plan to find work for 500,000 young people by June 2010. That includes grants to companies that employ Gen Yers and a 12 percent increase in new government-funded apprenticeships in plumbing, carpentry, and other trades.

Some wonder how much good those programs will do given the severity of the downturn. "There's pressure on governments to find employment for young people, but I don't see how that's going to happen in the short term," says Giorgio S. Questa, a professor at City University's Cass Business School in London.

Business groups, meanwhile, fret that new apprenticeships could take jobs away from older workers and may prove unsustainable if government funding dries up. Neil Carberry, head of employment policy at the Confederation of British Industry, says similar programs in the 1980s failed because they simply kept young people busy without giving them sufficient skills to land more interesting work when the economy recovered. "People digging ditches and painting walls just doesn't add value," he says.

Lavish welfare systems ease some of the strain for Europe's Gen Y. With state-sponsored health care and ample jobless benefits, Europeans have fewer worries than unemployed twentysomethings in the US. And young Europeans are more likely to bunk with Mom and Dad than their American counterparts are, so it's easier for them to make ends meet while looking for a job. In Spain, for instance, more than half of people under 30 still live at home.

But that has done little to ease the pain of the crisis for many Spaniards. When the country's construction and real estate industries were booming, under-25s often skipped college to go straight to work, cashing in on the credit-fueled bonanza. Since 2007, though, the economy has imploded and may contract by 3.2 percent this year. Many young people were on short-term contracts, so they were first to be laid off when times got tough. And skipping further education in favor of employment, they often lack such skills as foreign languages, IT know-how, and advanced math that employers demand. Says Carlos Serrano, a 25-year-old electronic engineer from northern Spain who has been looking for a job for a year, with no luck: "The crisis has trapped us graduates at the worst possible time."