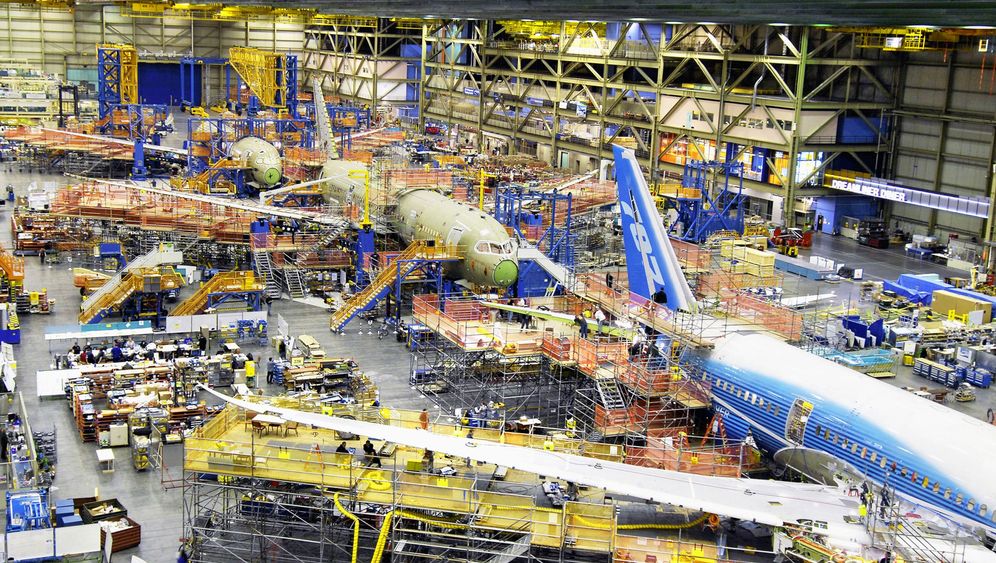 Eight years ago, managers at the American airplane manufacturer Boeing had a brainstorm. Their idea: Build airplanes the same way the automobile industry manufactures cars, with contractors producing entire components that are then assembled in a final step. That dream resulted in Boeing's new long-range 787, the first model to be built using this modular principle. And perhaps it was that approach that inspired the plane's name: Dreamliner.

A visit to Boeing's factory in Everett, Washington, north of Seattle, shows what's become of that heady vision. Here, gleaming airplane bodies stand nose to tail on a long factory work floor, as if on an assembly line. Most of them have already received the final coat of paint, adorned with logos for airlines such as Air India and Japan Airlines.

So far, though, not one of the planes, which cost up to $185 million (€131 million) each, has been delivered to buyers. They haven't even received official authorization, due to problems with the software and electronics. Instead, the finished jets are taking up space in the area behind the building and on a nearby airfield.

There are already around two dozen planes waiting here, with more set to join them in the coming weeks and months. Boeing also plans to move part of the fleet to Texas for retrofitting. This spectacular airplane stockpile in Washington could one day go down in aviation history -- as a monument to the hubris of Boeing managers and a warning for future generations.

Hardly any other project, with the exception of Airbus' A380 wide-body jet, has fueled the imaginations of aviation experts and fans around the world as strongly as Boeing's hypermodern showcase jet.

When the project officially began in 2003, it looked as if a new era in civilian aviation was about to dawn. Boeing managers promised their passengers more room, better cabin air quality and larger windows made of "smart glass" which could be adjusted to let in different amounts of light. It was all to be made possible by the increased use of a novel composite material called carbon fiber reinforced plastic (CFRP), instead of the traditional aluminum. The efficient new jet was also supposed to consume 20 percent less fuel and be easier to maintain.

Then there was the production process, which seemed even more revolutionary than the technology. According to Boeing's plans, final assembly of the new jet would take just three days. To achieve that aim, the company even tossed out traditional industry rules which hold that production of complex airplanes is best entrusted to experienced teams and that important components should be constructed at the main production facility.

Instead, Boeing outsourced the production of the aircraft's components, including important parts such as the plane's wings and enormous fuselage, to around 50 subcontractors around the world. Boeing CEO James McNerney stated that the company would retain responsibility only for design, development, assembly and customer care. "The R&D investment level and risk-sharing model with suppliers was deemed appropriate at the time," a Boeing spokesperson says today, in justifying the decision.

But revolutions always require sacrifices. It was a lesson Boeing learned the hard way. Nearly 60 customers worldwide are waiting for the 787, with first delivery now postponed for the seventh time. Even if the first of the 843 jets ordered so far is delivered to All Nippon Airways late this summer as planned, it will prove difficult to make up a delay that now amounts to three years.

Victim of a Cultural Shift

The delay is due to a series of problems. First, there were the bubbles that appeared during the process of baking the huge plastic fuselage components, which are made from sheets of carbon fiber soaked in polymers. Then there was a shortage of the necessary rivets and bolts. The horizontal stabilizers and the joint between the wing and fuselage also required improvements.

Then, as if those issues weren't enough, last November a control box ignited during a test flight, setting off a chain reaction that caused essential onboard systems to fail. That meant overhauling the power supply and installing new control software.

Other new airplane models -- the Airbus A380 for example -- have also had their share of mishaps and malfunctions in recent years. Most of the time, these were the results of the manufacturers setting themselves overly ambitious deadlines and cramming their planes full of new technology.

Still, those factors alone are not enough to explain Boeing's run of bad luck. The company's managers have fallen victim to a cultural shift they themselves helped to create before the decision to build the 787, and which is now threatening to overwhelm them.

It started with Boeing's merger with competitor McDonnell Douglas in the late 1990s. Harry Stonecipher, former CEO of McDonnell Douglas and later of Boeing, felt airplane construction, measured against the high investment and risk involved, yielded only modest returns. He and his colleagues began looking for a way to build the 787 using as little of the company's own resources as possible. The solution they settled on was large-scale outsourcing.

The newly merged corporation certainly would have had the necessary funds to carry out production itself, but company higher-ups apparently preferred to use the cash to buy back the firm's own stock, which had the agreeable side effect of increasing its share price. This not only benefitted the board of directors, with their attractive stock options, but also Stonecipher himself, who was one of the company's largest single stockholders.

"Boeing pursues a balanced cash deployment strategy to ensure it meets its goals in funding its existing operations, investing in future growth and for ensuring an appropriate return to shareholders through dividends and share repurchase," says a company spokesperson today.

Meanwhile, some of Boeing's subcontractors grew overwhelmed by the tasks assigned to them. Some even outsourced parts of their contracts to other outside companies, further muddling communications and coordination.

The parts that trickled into Boeing's final assembly plant in Seattle were often unfinished blanks instead of completed subassemblies. The original idea of simply putting together finished components, Lego-style, was out of the question.

Another problem was that the dimensions of the enormous fuselage sections also sometimes exceeded specified tolerance levels, which in the case of the 787 are often measured in mere millimeters.

In its desperation, Boeing had no choice but to take over some of the subcontracting companies itself. "We went too much with outsourcing," Jim Albaugh, CEO of Boeing's commercial airplane division, said in a recent interview with the Seattle Times. "Now we need to bring it back to a more prudent level."

Albaugh's boss, Boeing CEO McNerney, recently admitted the production schedule for the 787 may have been "overly ambitious."

That insight comes a bit too late. As early as February 2001, former McDonnell Douglas manager John Hart-Smith, an experienced engineer, warned against too much outsourcing at a Boeing symposium. "Excessive downsizing can lead to an increase in costs," he told his colleagues. "It can also reduce a company below the critical mass of technology needed to develop future product to stay in business." But his warning fell on deaf ears.

Boeing won't put an exact number on the additional costs for technical adjustments, aid to contractors and penalty fees for disgruntled customers, but industry experts put it at well over $10 billion (€7 billion).

So far, this amount has had only a limited effect on the company's balance sheet. Unlike Airbus, for example, Boeing is able to distribute these costs across a longer time period and among a very large number of airplanes that either have been sold or are still to be ordered. Still, the company admitted in late January that its profits this year could shrink by up to 15 percent, due to delayed delivery of the 787.

The next few months should reveal whether or not the ambitious project will still manage to prove a success. Boeing hopes to finally receive authorization for its showcase jet from American and European agencies -- and start moving planes off the lot in Everett. "Boeing is making good progress on the 787 program," says a company spokesperson. "We are re-drawing the lines and adjusting where necessary."

If everything goes according to plan, Boeing will deliver around a dozen or more of the planes this year. By 2013 -- just two years from now -- plans are to roll out 10 planes per month, instead of the current two, from the production facility near Seattle and another final assembly line in South Carolina.

But Boeing's managers may once again have bitten off more than they can chew. "It's a mystery to me how they plan to pull this off," says one high-ranking Airbus manager. "Normally in our industry, you would need twice as much time for such an ambitious ramping-up of production."