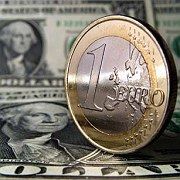 The world's two most powerful central bankers are two very different men, even when it comes to their outward appearance.

Jean-Claude Trichet, the president of the European Central Bank (ECB), has the bearing and style of a classic representative of Old Europe. He always wears the best suits, his gray hair is carefully parted and his voice is so unassuming that it sometimes comes across as more of a whisper. He is happy to swap the columns of numbers that are part of his job for a volume of modern French literature.

Ben Bernanke, Trichet's counterpart at America's central bank, the Federal Reserve (Fed), is an economics professor by trade and makes no secret of his dislike for suits. He once joked: "My proposal that Fed governors should signal their commitment to public service by wearing Hawaiian shirts and Bermuda shorts has so far gone unheeded." In his private life, Bernanke is an avid baseball fan.

The personalities of the two men are as different as their strategies and their approaches to their jobs. Trichet runs the ECB thoughtfully and with circumspection. The Fed, under Bernanke's leadership, is hands-on and decisive.

But which approach is more successful during an acute global financial crisis? And is it possible that the two key central bankers are in fact fueling the seemingly unending banking disaster?

The ECB remains calm -- sometimes to the point of doing nothing. Since the turbulence in the financial markets began last summer, it has left European key interest rates unchanged. The Fed, on the other hand, seems to take action to show it is doing something, sometimes to the point of hysteria. Since August of 2007, it has brought down the key interest rate at record speed, from 5.25 percent to 2.25 percent, to avert a recession in the United States.

The euro rises against the dollar.

But now it seems that all of the Fed's efforts have been in vain. Testifying before the US Congress, Bernanke was forced to admit that he expects the US economy to grow very little, if at all, in the first half of 2008. It "could even contract slightly," he said.

If a currency's value is a measure of confidence in an economy and its central bank, then the Europeans and their ECB are clearly emerging as the winners in the current crisis. Last week the euro climbed to a new record high of $1.60.

This has damaged confidence in both the Fed and its chairman. "Bernanke and his Fed are well on their way toward gambling away their credibility," says Thorsten Polleit, chief economist at Barclays Capital in Frankfurt.

Ironically, Bernanke planned to introduce a more modern political approach when he took over as Fed chairman in 2006. He wanted the decision-making process at the deeply traditional institution to be more transparent and less arbitrary than it was under his legendary predecessor, Alan Greenspan. Bernanke wanted to impose new rules on the Fed and its future decisions, making them clearer and more predictable.

From Frantic to Panic at the Fed

That attempt can now be considered a failure. The Fed's performance in recent months has been anything but clear or predictable. As recently as the beginning of last August, the Fed was refusing to cut interest rates, citing the attendant risks of inflation. Hardly two weeks later, it had a completely new situation analysis. Now it recognized the risks the growing financial crisis posed for the economy. Rate cuts were no longer a taboo, and in September the Fed introduced a first key interest rate cut. After that, it took only one month for it to announce the next cut. But, as Bernanke informed the markets, there would be no further cuts. The risk of inflation was simply too high.

That was his position until shortly before Christmas. But then, as the economic situation became increasingly bleak, Bernanke lowered interest rates again. He took his final step from frantic to panic in January. In a hastily scheduled videoconference call, Bernanke, fearing a market crash, committed the members of the Federal Open Market Committee to an extraordinary 0.75-percent rate cut.

A new cut came only a few days later. The Fed's interventions came to a head in mid-March, when it bailed out the investment bank Bear Stearns' by issuing a $29 billion (€18.1 billion) loan to cover its losses from bad investments. The venerable Wall Street firm had completely miscalculated when it invested in subprime mortgage-backed securities.

"Bernanke is making himself a slave to the stock markets," said Willem Buiter, a monetary policy expert at the London School of Economics. Trichet, on the other hand, has opted for a hands-off approach. Interest rates in the euro zone are still where they were before the crisis, despite a considerably worsened economic outlook for Europe.

But the ECB did not remain completely inactive. It provided the shaky banking sector with low-interest cash, a form of bridge loan. The banks needed the money because a lack of confidence had made them reluctant to lend each other money.

In taking this step, the ECB made it possible for businesses and consumers to continue borrowing. Otherwise the financial crisis would have sparked over to the real economy. 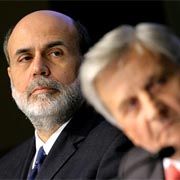 Ben Bernanke of the Federal Reserve and his counterpart at the European Central Bank, Jean-Claude Trichet, have very different approaches.

The fresh infusions of cash are not driving up prices, because the banks must repay the loans. "From the very beginning, we made sure that the measures of monetary policy and liquidity policy were kept separate," says an official with the European Central Bank.

The ECB acted according to a clear maxim. It would help the banks, but there would be no financial injections for the economy as a whole. The fear was that this would only lead to inflation.

Meanwhile, the keepers of the euro are watching the activities of their American counterparts with a mixture of suspicion and unease. Although they would not say it publicly, they consider Bernanke's moves to be both dangerous and incorrect.

The Fed chief is following a controversial role model. When the dotcom bubble burst at the beginning of the decade, Bernanke's predecessor Greenspan quickly reduced interest rates to the historically low level of 1 percent.

The Trauma of the Great Depression

This helped soften the fall, but when the economy regained its footing, the resulting influx of cash fueled an unparalleled real estate boom.

Greenspan wanted to solve the problems of the New Economy, but in doing so he also laid the foundation for the next crisis.

His successor Bernanke and his colleagues at the Fed are familiar with the risk of economic roller-coaster rides, and yet they are well on their way to repeating Greenspan's mistake. There are historic reasons for this.

Americans today are still traumatized by the Great Depression of the 1930s, when the United States sank into a spiral of deflation and unemployment. The Fed, which looked on without doing anything, was largely responsible for the debacle.

Banks collapsed and the money supply shrank, leading to falling prices. Consumers hoarded their dollars and consumption plunged. Businesses could no longer sell their products and millions of workers were let go.

In his days as an economics professor, Bernanke studied the causes and effects of this global economic crisis with an attention to detail bordering on obsession. "I am a fan of the Great Depression," he once admitted.

His goal now is to prevent such a disaster from happening on his watch at all costs. This explains why he has been so willing to pave the way for an influx of cash into the economy. His job is complicated by the fact that the Fed serves a dual purpose: to keep prices stable and to promote "maximum employment." This in turn presents the Fed and its chairman with another dilemma. With inflation at 4 percent, Bernanke should in fact raise interest rates, a step he doesn't dare take for fear that it would be even more likely to ring in a recession.

A fatal mix of a stagnating economy and rising prices is on the horizon, a phenomenon that happened in the 1970s and became known as stagflation. At the time, the only solution to break the vicious circle was a radical shift in interest-rate policy. The Fed raised interest rates, irrespective of the effects on growth and employment, triggering a deep adjustment crisis.

Trichet and his ECB have an easier time of it. They have only one goal: stable prices. This strategy is also the consequence of a trauma, namely the hyperinflation in Germany in the early 1920s and the collapse of the currency after World War II.

For this reason, the ECB has followed the German Bundesbank's lead by holding back with rate cuts. With prices currently rising at a rate of 3 percent, ECB representatives, unlike their American counterparts, are already talking about raising interest rates to keep inflation under control. They argue that keeping prices stable is the best way to promote growth.

The Europeans have even garnered praise from across the Atlantic. Unlike the Fed, the ECB, in the current financial crisis, has "demonstrated financial strength and reacted very decisively to the credit crunch," says Adam Posen, deputy director of the renowned Peterson Institute for International Economics in Washington.

The different schools of thought in the US and Europe affect key economic indicators. The Fed's tendency toward volatility has had a stronger effect on fluctuations in prices and economic growth in the United States than in continental Europe. Conversely, these fluctuations force the Fed to intervene more often. Actions and reactions overlap and begin to amplify each other.

The Europeans, on the other hand, are taking a softer approach, not just when it comes to the willingness to cut interest rates. Their steady-handed policy has softened fluctuations in the inflation rate, but also in economic growth. They prefer gradual growth over the US-style rollercoaster ride. So far, at least, their approach has been pretty successful.