A power vacuum has opened up at the top of Siemens after CEO Klaus Kleinfeld announced Wednesday that he would not renew his contract. The decision follows days of speculation over his fate, and comes just a week after the ouster of Heinrich von Pierer, who was chairman of the company's supervisory board.

Since Monday it had been clear that Kleinfeld was fighting to hold on to his position. But in the end the lack of support on the company's supervisory board prompted him to jump before he was pushed.

The move against Kleinfeld was led by Josef Ackermann, the head of Deutsche Bank, who sits on Siemens supervisory board, and Gerhard Cromme, the board's temporary chairman, who was appointed following von Pierer's resignation last week. Berthold Huber, the deputy head of the main trade union at the company, IG Metall, had also pushed for a new face at the top of the company. Once these three powerful figures began to move against him, Kleinfeld had little chance of surviving.

Kleinfeld tried to hold on to his job by focusing on his impressive record at the company. He decided to release impressive current quarterly figures two days before they were due, and a day before the key meeting of the supervisory board on Wednesday. But the board seemed determined to have a change at the top, someone not at any risk of being tainted with the series of corruption scandals at the company. These revolve around accusations that some employees had used million of euros of company money to pay bribes to help secure deals abroad.

Untenable at the helm

This week it became clear that the board was plotting against him. A series of media reports speculated the names of Kleinfeld's possible successors. And there were also reports that the supervisory board could not agree on a deal to extend his contract. In the end, Kleinfeld came to the conclusion that his position was untenable, and at the meeting of the supervisory board on Wednesday, he made his announcement. 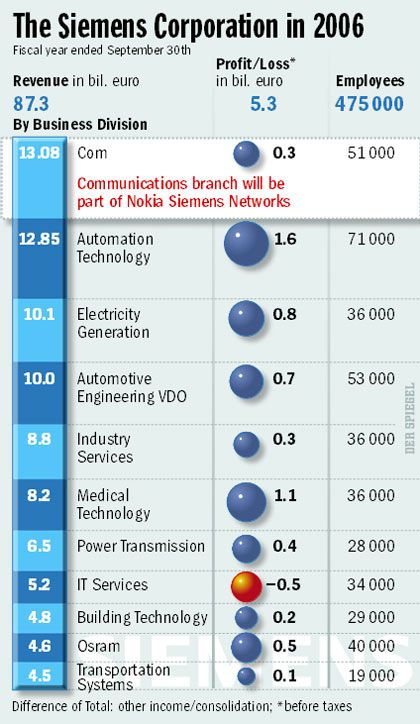 Graphic: An Overview of Siemens' operations

"In times like these, the company needs clarity about its leadership," Kleinfeld said. "I have therefore decided not to make myself available for an extension of my contract. The company must have complete freedom of action." He said he would step down after his contract runs out on Sept. 30.

In two short years, Kleinfeld has left a definite stamp on the company -- and made a host of enemies. Soon after taking over, he antagonized the workforce and the media with his abrasive management style. The new CEO made it quite obvious that he had little time for the way the venerable company was regarded as a national treasure. Unlike the consensual management style of his predecessor Heinrich von Pierer, the 49-year-old was in favor of a more aggressive style: Any divisions that were not profitable had to undergo a harsh restructuring program or were discarded.

Immediately after taking over at the helm, Kleinfeld sold off the company's mobile phone division to the Taiwanese company BenQ. A few months later he announced radical restructuring plans for Siemens Business Services and the telecommunications equipment division, that entailed around 10,000 job cuts. At the same time he went on a shopping tour in the US, which included the purchase of Bayer's American diagnostics business and the software firm UGS.

From the very beginning Siemens employees were worried about losing their jobs or about being able to achieve the new targets set by Kleinfeld. Then the media started to turn against him. Particularly after BenQ closed down the former Siemens mobile phone unit. The trade unions even suspected Kleinfeld of having cut a deal with BenQ, in order to get rid of the loss-making division.

But perhaps his biggest failure was to underestimate the impact of the corruption scandal. He seemed to not fully take control as one scandal after the other whirled around the company. Although he did take the issue seriously -- engaging an armada of American lawyers to internally investigate the alleged corruption -- to the public he appeared to be an appeaser.

At the same time he lost popularity because he increasingly distanced himself from Heinrich von Pierer, the former company patriarch and chairman of the supervisory board. Von Pierer had been CEO of the company from 1992 to 2005. The fact that the system of secret funds was set up under his watch called into question his management style, even though he was never directly implicated in the affair.

Whatever the eventual fallout from the corruptions scandals, no one can accuse Kleinfeld of poor performance when it came to the company's profitablity. On Thursday Siemens held a conference in Munich to release its half-yearly results (the current business year ends on Sept. 30). Kleinfled announced that the company had increased its profits by almost a third to €1.3 billion ($1.769 billion), while turnover increased by 10 percent to €20.6 billion.

Nevertheless, the shadow of the bribery scandal stills looms large over the company. Siemens also announced Thursday that the corruption affair was probably bigger than had previously been thought. Internal investigators have discovered new accounts that may also have been used for bribes. Up to now the company had identified suspicious payments amounting to €420 million.