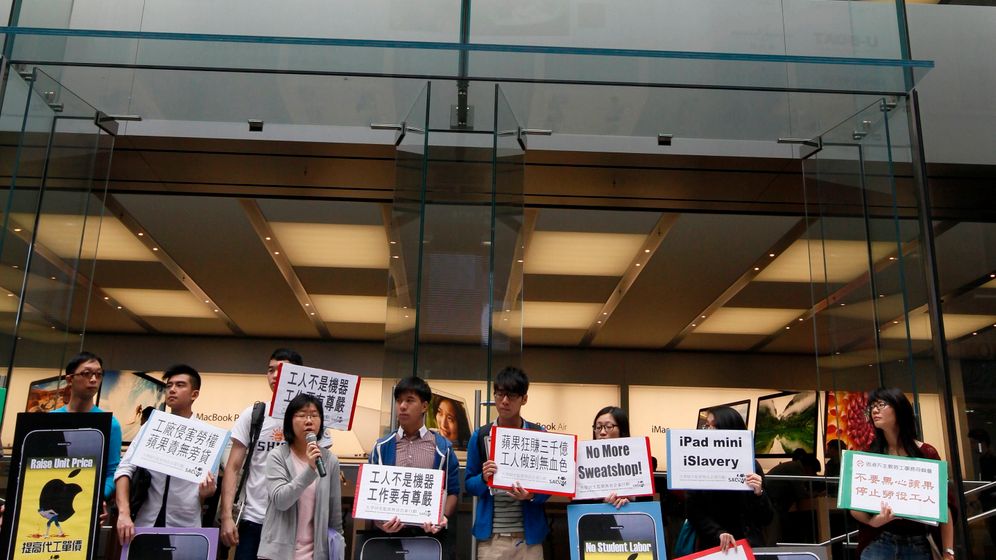 Tim Cook has tried to be a better person. Or at least, to look like one. Last year, Apple's CEO personally flew to China to have a look around Foxconn, the company's controversial supplier. Reports about migrant laborers' deplorable working conditions and low pay, as well as a spate of suicides were damaging Apple's image, so Cook promised improvements and also scouted around for new factories where the company's iPads, iPhones and computers could be produced. One of Apple's new partners is the Taiwanese electronics manufacturing company Pegatron, which operates several factories in China. But it recently transpired its workers are even worse off than those at Foxconn.

In a report called "Apple's Unkept Promises," set to be published this week, China Labor Watch (CLW) reaches a sobering conclusion: Over 10,000 student workers allegedly work in Apple's partner factories and many "interns" are aged between 16 and 18. Schools and teachers pocket a part of their wages in the form of "transportation and registration fees." One student who was majoring in pre-school education had to sign a six-month contract. Such student labor is not uncommon in China.

The incriminating report is based on research by several CLW investigators who worked undercover in factories manufacturing Apple computers, iPads and iPhones. They conducted over 200 interviews with their colleagues and made some shocking discoveries.

Working hours are too long, with 7-day weeks, shifts exceeding 12 hours and 80 hours of overtime a month not uncommon. It appears that "falsified attendance records" help disguise the real figures. Safety training and equipment are inadequate -- CLW maintains that many assembly halls do not provide sufficient fire escape routes. First aid kits are also few and far between. The watchdog also alleges that workers may only claim a limited number of sick days per month. A worker who is out for more than seven days won't receive sick pay.

Moreover, some Pegatron workers are required to stand at their workplaces for the entire day, while even pregnant women and underage employees work well over eight hours a day, according to CLW. Some factories discriminate by refraining from hiring Uighurs and Tibetans, as well as people with tattoos. CLW lists more than 36 violations of Chinese law. Until Apple intervened, one factory confiscated workers' personal documents "for long periods at a time, effectively preventing them from leaving the factory," reports one investigator.

Last week, the US company refused to comment on the allegations.

One of the Pegatron factories is located in eastern Shanghai on the way to Pudong airport. The complex is so vast, it's almost a district of its own, comprising assembly halls, office towers and dormitories.

According to one 25-year-old worker, Li Jun (name changed by SPIEGEL because he did not want to be identified by his real name), it is home to some 100,000 laborers. Dressed in jeans and a plaid shirt, Li looks like a typical college student. Even his hands are perfectly clean. As a beginner with no training, he earnt a monthly wage of 3200 yuan (€392). He described 12-hour days that begin at nine in the morning, explaining that a 50-minute break for lunch and a 40-minute break for an evening meal are unpaid. Eight of those 12 hours are "base" working hours, and paid 10 yuan (€1.20) per hour, while the hourly rate for the remaining two-and-a-half hours of overtime as well as weekend shifts is 15 yuan (€1.80). One of the biggest problems, he says, is the chronic overcrowding and resultant need to spend valuable time waiting in line -- such as in the canteen or at security checks. "Every day, I had to get up at seven and I never returned to my dormitory before 10 in the evening," he states.

He conducted research on behalf of CLW in other factories, but says that he never experienced such an abrasive climate as at Pegatron. Li Jun concedes that the way Chinese communicate tends to be very blunt, but that the lack of civility at Pegatron was particularly objectionable. "The group leader was always using some very coarse expressions, such as 'Cao ni ma' (fuck your mother), 'sha bi' (stupid cunt) and 'if you don't want to work here, just piss off!'" he says.

Many workers also suffer humiliating public abuse at unpaid meetings held every morning and every evening. "It's like a military roll call, with the workers standing in a row to be yelled at by their group leader," says Li Jun.

Some were so shocked by the tone that they resigned. Unfortunately, anyone who works less than a dozen days or so at Pegatron will not be paid, according to the CLW report. If workers want to make a complaint, they can either use a worker hotline or leave a note in the "vice president" letter box. But CLW investigator Li Jun says that in the 40 days he worked at Pegatron, no one ever dared call the hotline and although he did see a few letters in the mailbox, they were never actually picked up. Most of the workers are unaware if the factory has a union or any organization that serves as a works council.

Ma Liu (the name has also been changed) also went undercover for CLW. He worked at AVY Precision Technology, a factory in Suzhou that belongs to the Pegatron empire. He worked on manufacturing the backs of iPads, drilling holes for the headphone jacks and finishing the edges. Noise levels were appalling and workers had to breathe air contaminated with chemicals, he says, and there was no first aid kit. When he injured two fingers with the machinery, he was not permitted to leave his spot to find bandages, despite bleeding heavily, he says. After 40 minutes, his group leader gave him a piece of "industrial grade plastic tape" for his wound and instructed him to continue working.

Ma is an experienced lawyer specialized in labor law. He has conducted research in over 80 companies and says that AVY Precision Technology is one of the worst he has ever inspected. Laborers are often forced to work 136 hours of overtime a month. "Pegatron is in the process of repeating many of the mistakes that Foxconn made," says Ma. "Why would it be any different when factories with more than 10,000 employees are expanding ten-fold?"

"Apple chose these vendors because their prices are cheaper," says Li Qiang, who coordinates CLW from New York. "But these lower prices come at the cost of worse factory conditions."

"We follow the local government rule so we do not worry," claims a Pegatron spokesperson. "Worker protection is our first priority."