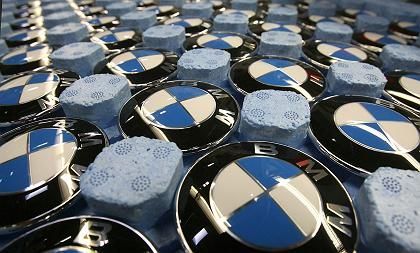 Everyone knew it was coming, but on Wednesday, German automaker BMW confirmed that it was cutting a total of 8,100 jobs as part of a massive savings plan. Among the jobs to be slashed are 2,500 permanent staff in Germany along with 5,000 temporary workers. Six-hundred workers in factories outside of Germany will likewise be laid off.

And more may be on the way. BMW's personnel chief, Ernst Baumann, told reporters on Wednesday that if the euro continues to rise above the $1.50 mark it hit this week, the carmaker "will be in need of further measures taken on labor costs."

A large chunk of BMW's sales are in the United States, and the company is suffering from the weak dollar. And while the company's US factory in Spartanburg, South Carolina has proven to be a goldmine, the lion's share of its vehicles are still produced in Germany. High raw materials costs are also eating into profits.

BMW hopes that the job cuts will result in annual savings of up to €500 million ($752 million). In January, BMW informed many of its suppliers that it would be paying less for some parts and in early February, management presented a four-year plan to cut costs by €6 billion ($9 billion). The savings are expected to primarily come in the company's materials management, manufacturing and development units.

The announcement comes just under a month after the Munich-based company reported record sales for 2007, upping car sales from €47.77 billion in 2006 to almost €54 billion last year. While final results for 2007 have not yet been made public, BMW is expected to announce profits for 2007 of €3.75 billion. In announcing the sales numbers, CEO Norbert Reithofer said "in 2008, we are expecting to set yet another production record. We will grow strongly in the first half of the year and more moderately in the second half."

Apparently, though, those profits aren't good enough for the company. On Wednesday, Reithofer said it was essential in the long-term that BMW have profit margins of 8 to 10 percent in order to preserve its status as an industry leader.

That stance has drawn harsh criticism for a company that has long had a respected reputation for granting its workers a high degree of job security. The labor union IG Metall is concerned that the company has now changed direction. IG Metall's union boss in Bavaria, where BMW is based, accused the company of "short-sighted profiteering and permanently unsettling its employees."

Few inside the company would dispute BMW's need to go on a diet. BMW's much-praised corporate culture in the past led the Munich firm down a few wrong paths -- and Reithofer urgently needed to set a course correction. A number of the company's administrative divisions are massively overstaffed. And the company's research and development division developed some luxurious practices that will be difficult to finance looking ahead to the future. Some engineers became so obsessed with technological finesse that they openly deplored anyone who dared to question the necessity of the gimmicks they were creating.

Still, few departments wanted to get hit. They also had a number of compelling arguments against cuts: Research and development could reason, for example, that it needs resources to create better technologies in order to reduce CO2 emissions -- especially if mandatory limits on cars get codified as EU bureaucrats would like to see happen. And technologies of the future like hydrogen-fueled vehicles are becoming increasingly important.

The company indicated just before last Christmas that job cuts were on the way. On Wednesday the company insisted that its huge presence in Germany would not be substantially affected by the savings plan. Of the 108,000 people employed by BMW worldwide, 80,000 of them work in Germany. The company says the cuts made in Germany would only affect 3 percent of the full-time employees based here.

Half of the temporary workers cut have already left the company, Baumann said. The rest will follow in the course of the year. Job cuts among the permanent staff will take place on a volunteer basis under a plan which includes voluntary redundancy packages and options for older workers to go part time. Bauman mentioned that the cuts would hit all German production sites, with the exception of a BMW plant in Leipzig -- which would only be marginally affected by the measures.

Despite this week's layoff annoucement, the company says it is still planning to hire additional new workers in the next few years. About 500 new hires are planned for 2008 -- primarily IT workers and engineers. And with planned manufacturing expansion, the company is expected to return to its 2007 staff level by 2012.

Given those ambitions, critics have dismissed the current layoffs as short-sighted -- and also incompatible with BMW's own stated goal of expanding production by 2012 to 1.8 million autos a year, an increase of 300,000 cars over 2007 levels.

"Who is supposed to develop and manufacture cars, if everyone has been laid off?" one worker asked.