Angela Merkel and her fellow conservative Finance Minister Wolfgang Schäuble like to play the role of teachers when dealing with their partners from the euro zone. There is hardly a European Council session in which the German chancellor doesn't preach the benefits of austerity ("solid budgets and growth are not mutually exclusive"), and hardly a meeting of finance ministers goes by without Schäuble pointing out that some countries still have homework to do when it comes to their national finances.

The admonitions, coupled with the subtle message that Germany's budget looks exemplary by comparison, have earned the two politicians a reputation for being patronizing.

Just how healthy German finances are was revealed at the beginning of last week, in the form of an early-warning report by the European Commission. Germany was the only large country to be given an almost perfect grade.

And yet, if Merkel and Schäuble have their way, the country many in Europe already see as a model of sound budget management will become even more exemplary. "We cannot expect Greece and the other crisis-stricken countries to accept more and more austerity measures, while nothing changes in Germany," says a close associate of the chancellor.

As such, Merkel and Schäuble want to significantly ratchet up consolidation efforts. The 2013 budget, currently being prepared at the Finance Ministry, will include many billions in savings. In addition, the last stage of the so-called debt brake -- Germany's constitutionally anchored law regulating state borrowing -- will be brought forward by two years instead of going into effect as planned in 2016. Measures under discussion include cuts in social benefits and a reduction in government services. Merkel and Schäuble believe that Germany can only remain credible in the euro crisis by demonstrating that it is not simply reaping the benefits of past efforts. Germany wants to lead by example.

For Merkel, the new focus means she is once again changing roles. When she started her tenure, she was in favor of extending the lives of nuclear power plants, but then she shifted to throw her support behind Germany's renewable energy revolution. At times she has been very critical of Greece, at others she has acted as Europe's greatest savior. Now she is returning to the role in which, according to her close advisors, she already played with success during the financial crisis: that of the thrifty housewife.

Merkel believes that current poll numbers reflect a broad desire in Germany for savings. According to recent political surveys, Merkel's Christian Democrats and their Bavarian sister party, the Christian Social Union, currently enjoy 38 percent support. It is the best result the conservatives have seen since the 2009 general elections.

Merkel's interpretation of those numbers may be right. Against the backdrop of the economic crisis, pollsters have noticed a change in attitudes within the population. Campaign promises that require borrowed funds have lost their appeal, with Germans now valuing sound government finances, they say. Voters would rather have lower sovereign debt than lower taxes.

Germany's governing coalition would seem to have taken notice. Merkel's junior coalition partner, the Free Democrats, quickly staked out a position as the party of tax cuts following the 2009 elections. Now, it has shifted focus to sovereign debt reduction. The CSU, too, has backed down. A year ago, the party was still insisting on a far-reaching reform of Germany's taxation system. Now, however, the CSU is only focused on a minor tax relief plan. And even that focus is political rather than ideological -- the result of the plan's recent rejection by the opposition Social Democrats in the Bundesrat, Germany's upper legislative chamber.

The CDU, for its part, has written off the issue completely. Merkel wants to portray herself to voters as the European chancellor, in terms of both foreign and domestic policy. At CDU headquarters in Berlin, it has become increasingly apparent to staff that saving has gained in importance. CDU General Secretary Hermann Gröhe recently made it clear that the current campaign will differ markedly from the last one. Tax cuts, lower social security contributions or any other election gifts will not be promised this time, Gröhe said. "In 2013, we won't be standing in front of voters with a big horn of plenty." The dramatic consequences of too much debt in Europe, he says, have made it clear to everyone "how important frugality is." The 2013 budget has thus become part of the preparations for the coming election campaign.

A central part of the plan is to accelerate the reduction of new debt that Berlin must take on. Finance Minister Schäuble hopes to get by with almost no new debt in 2014 instead of in 2016 as the debt ceiling requires. The fiscal rule allows him net borrowing of no more than 0.35 percent of annual economic output, or about €9 billion ($11.8 billion). According to internal calculations by the Finance Ministry, this so-called structural deficit, adjusted for economic influences, was still at 1.1 percent in 2011. It is expected to fall to 0.5 percent this year.

It's an ambitious goal. To achieve it, the coalition will have to adhere to strict austerity rules in the current year's budget, but especially when assembling the budget for 2013. According to CDU deputy floor leader Michael Meister, new borrowing will remain at €26.1 billion this year, even though the first installments of at least €8.6 billion for the new euro bailout fund, the European Stability Mechanism (ESM), will come due in the summer. Meister intends to achieve this goal primarily through "smart budget management." In other words, each of the 5,500 items in the budget will be closely examined and will be granted only as much as absolutely necessary.

In addition, tax revenues last autumn were significantly higher than forecast. And Germany has also saved billions on sovereign bond interest rates, with returns at record lows due to the ongoing euro crisis.

The challenges will be greater next year. In 2013, the finance minister hopes to reduce new borrowing to €15 billion. But because the planned financial transaction tax cannot be implemented throughout Europe, and a number of additional expenses will be incurred, Schäuble will have to find some €10 billion in order to hit his target.

That is the primary motivation for assembling a new austerity package. Finance Ministry officials already have a clear idea of what it should look like. In particular, they have set their sights on the social benefits coffers, which, thanks to a strong economy, are currently well funded. Federal healthcare subsidies are to be reduced by up to €2 billion and the government's contribution to the pension insurance system is to be trimmed by a similar amount. Both cuts are to be lasting.

Schäuble also intends to cut the budget of the Federal Employment Agency by several hundred million euros and to cap outlays for the parental leave allowance program, expenditures for which have risen substantially in recent years.

Schäuble's approach is not free of risk. Many within the conservative camp have long resisted extensive austerity measures and some within the FDP are also skeptical of some elements of the plan. FDP chair Philipp Rösler, however, has said that his party will "comprehensively support the budget consolidation." He adds that the Ministry of Health, led by FDP member Daniel Bahr, "will not be an exception."

Schäuble's dream of a balanced budget is hardly a new one. In the last decade, two of Schäuble's predecessors, Hans Eichel and Peer Steinbrück, both Social Democrats, attempted to do the same, only to be thwarted by the economy.

Indeed, economic downturn is now the biggest risk facing Merkel's austerity program. Although the most recent growth forecasts are more optimistic than they have been, it still can't be ruled out that the euro crisis will drag Germany down with it. And should the monetary union fragment, of course, all bets would be off.

That scenario, however, no longer seems likely, at least for the moment. Indeed, Finance Minister Schäuble, as the oldest member of the cabinet, could actually become the first finance minister in more than 40 years to introduce a budget that doesn't depend on taking on new debts. And his chances for success aren't half bad. 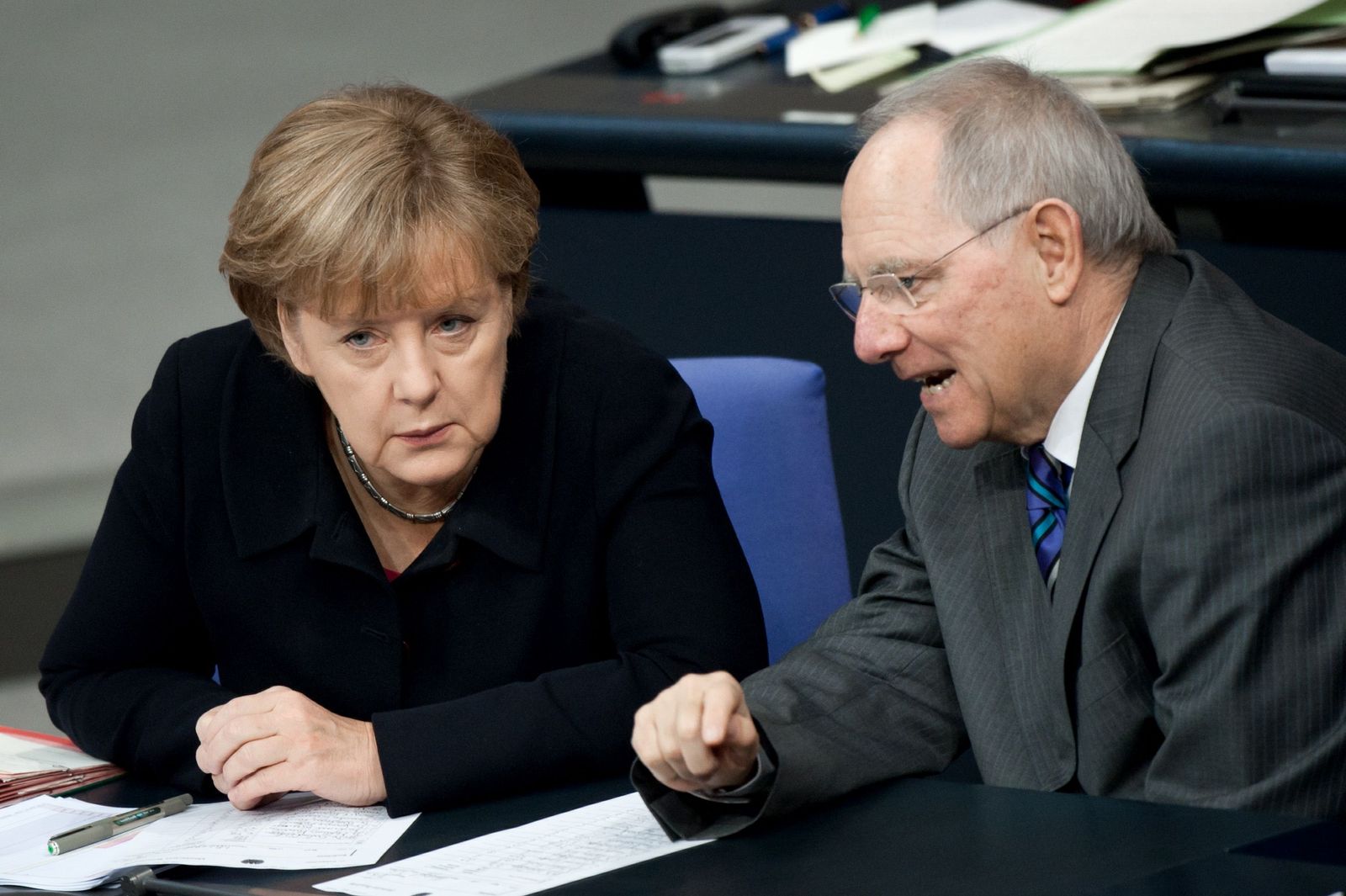