If Cyprus doesn't receive billions in foreign aid within a few weeks, the country will default by June at the very latest. But insolvency could come even sooner for the country's two largest banks. The Bank of Cyprus and Laiki Bank are only able to survive at the moment through emergency aid from the European Central Bank, which on Thursday threatened to cut off all liquidity on Monday if terms of a European Union bailout deal aren't finalized with the government in Nicosia.

The banks are actually the very core of Cyprus' problems at the moment. They are bloated, pumped full of Greek sovereign bonds and more or less already bankrupt. Without these banks, Cyprus wouldn't need to seek aid from the permanent euro bailout fund, the European Stability Mechanism (ESM). The banks' difficulties have destroyed Cyprus' reputation on the international financial markets and investors are no longer willing to lend to the country.

Already last year, the government had to prop up Laiki, the country's second largest bank, with €1.8 billion, an amount that accounts for about 10 percent of Cyprus' annual gross domestic product. Now the ailing financial sector requires an additional €10.8 billion in aid -- an unimaginably large figure for a small nation that has just under a million residents. The EU aid would represent the lion's share of the €17.5 billion bailout Cyprus currently requires.

As such, it makes sense that euro-zone member states and the International Monetary Fund have made it a precondition that these banks also participate financially in the rescue. The only question is whether there's any viable alternative than to tap the accounts of banking customers directly in order to raise the €5.8 billion missing in the bailout.

Calls for Banks to Be Wound Down

Many experts believe that the cleanest solution would be to provide for an orderly insolvency for the banks and for them to be liquidated. "That would make more sense than ripping off the small depositors," said Hans-Peter Burghof, a banking professor at Germany's University of Hohenheim.

Still, if the banks were made to go bankrupt, depositors would still feel the pain -- but only the big ones. Deposits of up to €100,000 would be protected by state deposit guarantees. Under this scenario, it would be the shareholders and bondholders who would lose a good deal of their investments.

Under this scenario, the chances of the feared contagion infecting banks in other countries would also remain rather small, Burghof believes. Data from the Bank for International Settlements in Basel, Switzerland, shows that, at the end of September 2012, the Cypriot banks had a total of $441 million in debt with foreign banks -- a dimension that could be coped with easily. Spain, by comparison, has a whopping €132 billion in liabilities to foreign banks.

Another proposal being considered is to wind down the two banks, park their most toxic assets in a "bad bank" and then sell the rest to Russia's VTB Bank, which is active on the island.

The only country that faces any significant risks is Greece, where subsidiaries of Cypriot banks active there would have to be split off from their parent companies and operated as separate entities, possibly under the tutelage of Greek financial institutions. But that is already envisioned in the Euro Group's rescued plan.

According to reports, a solution for winding down the two banks had also been part of the negotiations among euro-zone member states, Cyprus and the IMF. Together with the agreed to €10 billion from the ESM, it would generate enough money to prevent the entire country from going bust. But the Cypriot government has so far vehemently opposed the plan, because a liquidation of the country's two biggest banks would bring instant death to the very business model that has made Cyprus a small banking center. Hardly any investors would continue parking their money there, no matter how low the tax rate was.

Ultimately, Cyprus will have to reinvent itself. Until the crisis hit, the financial and real estate sectors comprised a quarter of the country's gross value add. Another quarter comes from tourism. Industry only comprises about 12 percent. Cyprus, it appears, tied its entire fate to its banks. And as long as the government remains unprepared to change this, the country could well be headed for bankruptcy. 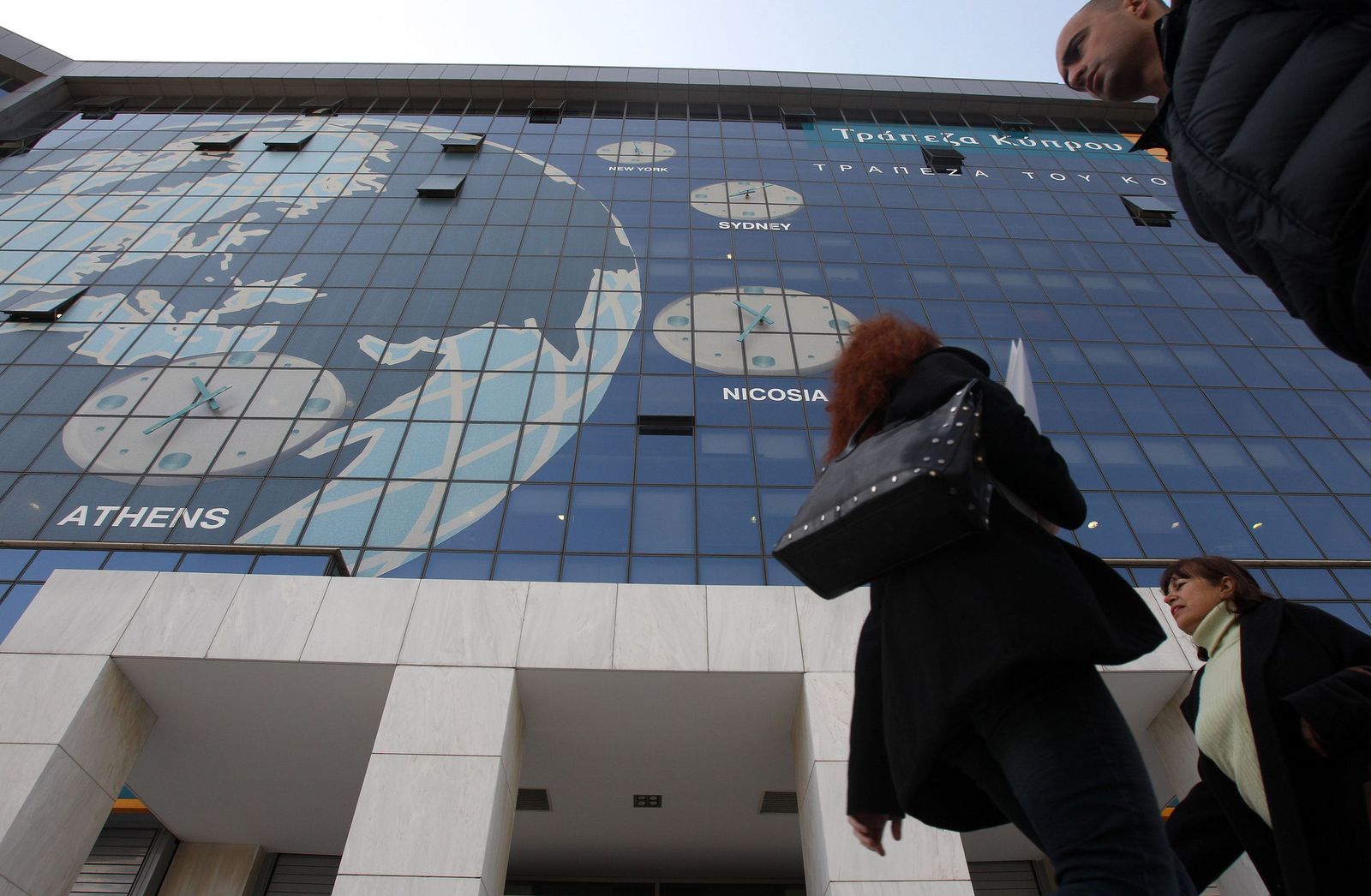 Pedestrians pass the headquarters of Greek operations of the Bank of Cyprus in Athens.