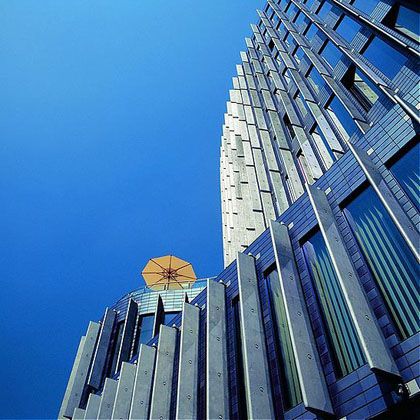 A number of five-star hotels in Berlin, including the Swissotel pictured here, are hoping to win back clients by dropping a star.

What with an international reputation for hipness and a number of film, fashion and cultural events to attract the young and well-heeled, Berlin's 18 five-star hotels, it would seem, are a lucky lot.

But as attractive as such a clientele may be, it is a different group of customers hoteliers in the German capital are worried about. Lately, they say, there has been a drop in the amount of custom from large pharmaceutical companies. Now, according to a Monday report in the newspaper Berliner Morgenpost, five luxury hotels in Berlin want to relinquish a star in hopes of luring them back.

It has become common for pharmaceutical companies to put doctors up in cushy hotels for weekend product presentations and similar events. But Berlin's luxury hotels, according to the Morgenpost article, have noticed a "perceptible decline" in the numbers of such bookings.

The hotels appear to believe that their business has been hurt by a recommendation that pharmaceutical companies reduce the amount of pampering given to physicians and others attending events hosted by drug companies.

The recommendation was published by a group founded in 2004 that promotes the "voluntary self-control" of the pharmaceutical industry. According to its Web site ( in German only), the Berlin-based group "monitors the proper collaboration between pharmaceutical companies and physicians." The group recommends that "lodging and hospitality not exceed certain appropriate parameters and that they must be of secondary importance to the professional purpose of the event." It also recommended that the "leisure-time value of the event location" play no role in whether it is chosen or not.

Although this recommendation does not directly address the number of stars that an appropriate hotel should have, the hotels feel that their five-star billing makes them resemble the luxury establishments the recommendation is urging pharmaceutical companies to avoid.

Willy Weiland, the director of the InterContinental and president of Berlin's federation of hotels and inns, told the Berliner Morgenpost that the loss in the pharmaceutical business is no laughing matter. He estimates that 60,000 of his hotel's 140,000 annual overnight stays derive from individuals participating in congresses such as those hosted by drug companies.

Markus Luthe, however, head of the German Hotel and Restaurant Association (Dehoga), told the paper that hoteliers in Berlin were just "too nervous."

Rather than being five-star hotels, the five establishments in question would prefer to be four-star "luxury hotels at the five-star level." Still, the drop in star ranking does not mean that room prices are dropping as well. Five-star accommodations in Berlin can range between €250 and €490 ($290 and $765) per night, according to Dehoga.