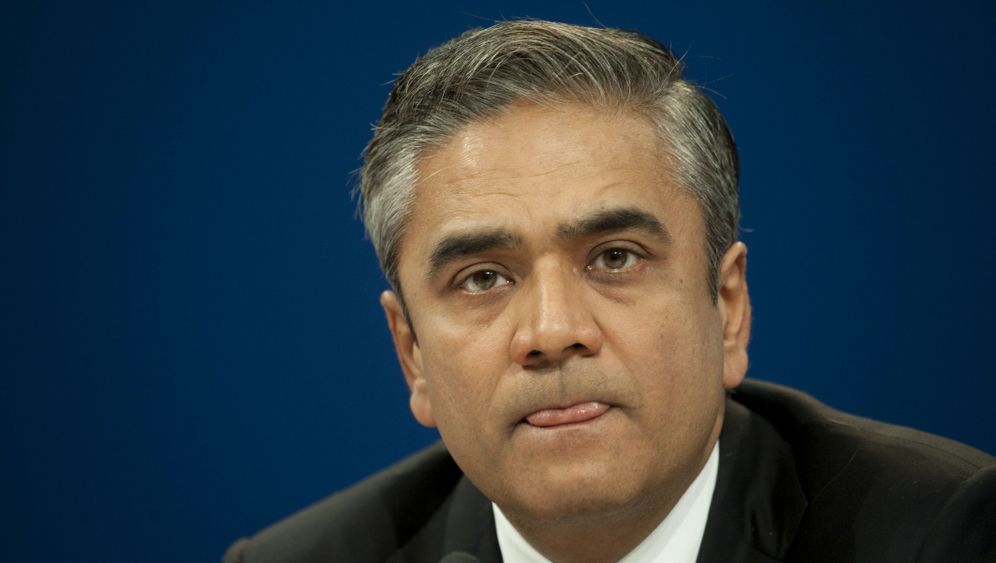 When Anshu Jain had finished his first annual results press conference as co-CEO of Deutsche Bank last Thursday, he tried his hand at a bit of irony. When asked what he thought of German draft legislation that could force financial institutions to separate their commercial and investment banking operations, he said the plan was comprehensive and gave no cause for celebration. "In other words, made in Germany," Jain said with a broad grin.

Eight months after taking the helm of the bank, Jain, who hails from India, has settled in to life in Germany. But plans afoot by banking supervisors are unlikely to be a laughing matter for him. Germany's federal financial supervisory authority BaFin is about to complete an investigation into the role Deutsche Bank played in the LIBOR (London Interbank Offered Rate) rate-rigging scandal.

Over the past few months, Deutsche Bank and its supervisory board chairman, Paul Achleitner, have repeatedly denied that there are any indications that board members were involved in the massive scandal surrounding the benchmark rate that affects some $350 trillion (€257 trillion) worth of financial transactions worldwide. Insiders, though, have leveled serious allegations against Jain, who headed the investment banking division during the period in question.

According to these sources, Jain may not have known that staff members in his division colluded with a number of other banks to influence LIBOR and related EURIBOR interest rates. But he was well aware of the conflicts of interest faced by his bank's money market traders, who were involved in establishing the LIBOR interest rates -- and who also bet enormous sums of money on the movement of these rates. The insiders point out that Jain was responsible for distributing millions of euros in bonuses to successful traders -- and they say that he had a nodding acquaintance at least with one of the men believed to have played a role in a LIBOR cartel: Christian Bittar.

Now, officials are trying to establish who at Deutsche Bank and other LIBOR banks is responsible for a system that accepted conflicts of interest in order to achieve maximum profits -- a system that BaFin head Elke König described in a SPIEGEL interview last year as "practically an invitation to manipulate."

Bittar joined Deutsche Bank in 1999. He traded in interest rate derivatives, which are securities whose price hinges on the movement of short-term interest rates. For decades now, the LIBOR has been the decisive benchmark for these interest rates.

The British Bankers' Association (BBA) calculates LIBOR rates for various currencies and maturities, in large part based on information from international banks. These LIBOR banks provide the association with estimates of the short-term interest rates that they would pay to borrow money from other financial institutions.

Such estimates usually come from the very trading divisions within these banks that also earn money betting on interest rates -- an inherent conflict of interest that management and bank supervisors have ignored for years. The system gave traders, who were motivated by high bonuses, a discretionary margin when stating LIBOR rates. "Everyone was aware of it, but today they all act as if they were flabbergasted," says an interest rate derivatives trader.

In 2010, the US Commodities Futures Trading Commission (CFTC) launched a worldwide probe into suspected LIBOR manipulations. Two years later, regulatory authorities in the US and Britain imposed a fine of some $450 million on British banking giant Barclays, forcing its CEO Bob Diamond to resign.

That has set alarm bells ringing in at least 16 major banks that are under investigation in the LIBOR probe. Deutsche Bank has been trying to insulate Jain from the scandal so he doesn't suffer the same fate as Diamond.

Deutsche Bank trader Christian Bittar is accused of having colluded with a ring of Barclays traders headed by Philippe Moryoussef. The members of this group did their best to nudge the EURIBOR in a direction that suited their purposes. Bittar wasn't just any trader at Deutsche. For years, he was apparently one of the bank's largest sources of revenue.

During his years in charge of Deutsche's investment banking operation, Jain linked up a number of different trading units to make them more efficient. For instance, the team responsible for cash trading, where the LIBOR rates were calculated, was ordered to closely communicate with their colleagues in derivatives trading.

"Combining cash and derivatives businesses has paid rich dividends in our credit, rates and foreign exchange franchises," Jain proudly reported in 2005. But that kind of combination also encouraged forbidden collusion -- at Deutsche and many other banks -- something that Jain claims that he only recognized years later.

There are different opinions about whether, and how well, Jain knew Bittar, who reported to David Nicholls, who in turn reported to Alan Cloete. Within the bank hierarchy, Cloete stood directly under Jain, who later promoted him to the expanded management board. Jain reportedly regularly saw Bittar during meetings in the trading rooms.

Oddly enough, it was during the crisis year of 2008 that Bittar celebrated his greatest success. He reportedly earned over €500 million for the bank. Despite this coup, however, his employer suffered a pretax loss of €5.7 billion in 2008.

Bittar's profits didn't meet with unrestrained delight at Deutsche. He was contractually entitled to a certain percentage of the profit from his trades, and in 2008 these bonuses are said to have amounted to over €50 million. A Deutsche Bank committee that monitors payments to senior executives approved Bittar's bonus and forwarded it to the management board, which discussed the matter in early 2009. Board members reportedly complained that the current situation made it impossible to approve such a large bonus without drawing the ire of the public. It was ultimately decided to spread the bonus over a number of years.

Jain commissioned an internal auditing group to investigate whether everything had been done according to the book in Bittar's trading area, but the auditors found no irregularities. It wasn't until 2010, when investigators from US agencies came knocking, that the bank probed allegations of LIBOR manipulation. According to the bank, this ongoing investigation has provided no indication of a connection between the massive profits generated by the trading operation and "the inappropriate behavior of a limited number of employees." Nevertheless, in 2011 Bittar and at least one other suspected trader were fired -- and the bank kept about €40 million of Bittar's unpaid bonuses.

Last year, when Deutsche Bank shed 1,500 jobs in investment banking, Bittar's superior David Nicholls was also dismissed, although no allegations have been made against him in connection with the LIBOR scandal.

But shouldn't the internal auditors have recognized back in 2008 that something was amiss with the LIBOR deals? Already during the spring of that year, the Bank for International Settlements (BIS), which acts as an umbrella organization for central banks, had voiced suspicion that LIBOR banks were feeding dubious rates into the system. What's more, in the summer of 2008 Britain's banking association made proposals for a LIBOR reform to prevent abuse.

Yet it wasn't until the spring of 2012 that Deutsche Bank introduced internal controls to monitor the setting of LIBOR rates. Up until then, there had been no guidelines, at least according to one individual who is familiar with the system. "There were no red lines or Chinese walls," the source says, referring to in-company barriers to avoid any conflicts of interest.

For Deutsche Bank and Jain, everything now depends on how regulators in Germany, the UK, the US and elsewhere judge their role in the LIBOR scandal. BaFin wants to conclude its special investigation in the first quarter of 2013, while investigations by other agencies could take longer to complete. In the next few days, the Royal Bank of Scotland is expected to make a settlement amounting to up to 500 million pounds (€580 million, $786 million). Likewise, RBS apparently plans to part company with the head of its investment banking division, John Hourican. If BaFin discovers a failure on an organizational level, in the worst case scenario it could suspend management board members from office, although this is not seen as likely in financial circles.

Deutsche Bank could face drastic financial sanctions from the US and Britain. Settlements recently reached between government agencies and Barclays, and with Switzerland's UBS, could give some indication of what is in store for the German bank. The Swiss had to pay some $1.5 billion in fines and issue a public admission of guilt.

The US regulatory agency CFTC had reportedly proposed that UBS be forced to pay a $1 million fine for every proven case of attempted manipulation. This could have pushed the overall costs for the bank to a total of $3.5 billion. It helped the Swiss that they turned themselves in to authorities before they knew about the investigations by the CFTC.

Many regulators and politicians say that they see the LIBOR scandal not as an isolated case, but rather within the context of the plethora of banking scandals over the past few years -- and they hope to use the LIBOR rigging scam as a means of meting out punishment for the wrongdoing that led to the financial crisis.

Deutsche Bank is not as deeply embroiled in the scandal as UBS, where over 100 employees were more or less involved in the rigging. Even critics of Deutsche Bank admit that there are "light-years of difference." Nevertheless, the costs for the Frankfurt-based bank could add up to billions of euros. The EU Commission has filed several antitrust suits against LIBOR banks, and a large number of investors are suing for damages -- with more possible lawsuits looming in the future.

Consequently, the LIBOR banks are now talking about an industry-wide settlement, similar to the one that was concluded with the US tobacco industry in the late 1990s. Jain recently dampened expectations, though, that a global agreement could be reached.