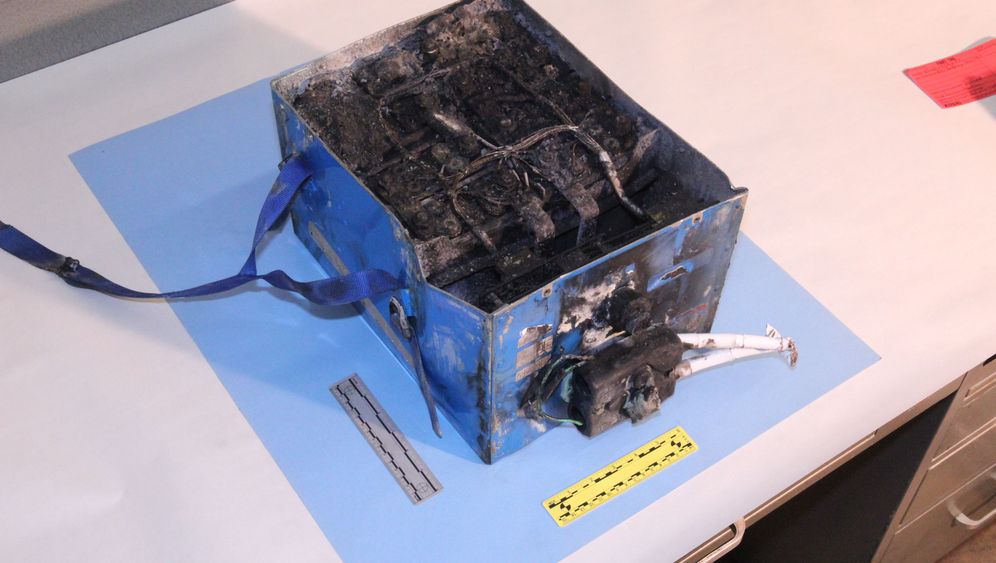 The last ones to leave the plane were the pilots, who casually stepped onto the emergency chute, absorbed the impact when they hit the ground and purposefully walked away.

The shaky mobile-phone videos were already circulating online Wednesday morning, shortly after the Boeing 787 with Japan's All Nippon Airways made an emergency landing at the provincial Takamatsu airport in western Japan. These videos are a living nightmare for Boeing, the proud American plane manufacturer, and its engineers. The plane was forced to land after a warning of battery failure and the resulting smoke.

Until now, Boeing has tried to depict the problems with its prestige project as nothing more than normal growing pains. But aviation experts say that issues with the battery go to the core of the airplane's design. The problem could turn out to be even more serious than the hairline cracks in the wings of Airbus's A380 superjumbo, which are annoying and costly to repair, but don't affect the architecture of the plane as a whole.

This isn't the case with the Dreamliner's problems. Kevin Hiatt, president of the Virginia-based Flight Safety Foundation, says the problems "are quite serious for Boeing because they affect the Dreamliner's entire system."

The Boeing 787's electrical system is powered by lithium-ion batteries, a type that has never been used on passenger jets. These are like the ones used in smartphones, but much bigger, with one version weighing some 30 kilograms (66 pounds). Their capacity is also considerably larger than the nickel-cadmium batteries that are otherwise used in planes and pose little fire danger. The lithium-ion batteries, however, are at risk of catching fire or exploding, and they can become hot enough to melt the aluminium used to build airplanes.

But the Dreamliner desperately requires such a large energy-storage unit because Boeing engineers in Seattle redesigned a number of control systems to be powered electrically rather than hydraulically. That includes the compressor that provides cabin air as well as the electro-thermal heater mats meant to prevent the wings on the wide-body plane from icing over.

Classic airliner designs use hot air from the engines for this purpose, but Boeing engineers ventured into new territory in their efforts to cut down on weight and energy usage. The company says that, as a result, the Dreamliner uses 20 percent less kerosene than planes of a similar size, and that at least 3 to 4 percent of the fuel savings comes from the new electric system, which has been dubbed the "Electrical Power Conversion System" by Thales, its French manufacturer.

The heart of the construction is a turbine at the plane's tail that generates electricity instead of compressed air, as a conventional plane does. But the Dreamliner still needs electricity when the engines aren't running -- especially if there is an in-flight emergency in which the turbines are no longer generating electricity. As a result, the Dreamliner requires a massive amount of battery power on board. And only the combustible lithium-ion batteries, housed in two different places on the plane, can supply it.

In the case of the fire on board a Japan Airlines 787 that landed in Boston on Jan. 7, it was the battery located under the cargo compartment behind the wings. Wednesday's emergency landing in Japan came after the plane's computers alerted pilots to smoke coming from the energy cell in the front cargo compartment, which sits almost directly below the cockpit.

There have been a number of other incidents involving the new electrical system. During one test flight, for example, electrical control equipment in the rear cargo compartment caught fire. In early December 2012, a United Airlines 787 made an emergency landing in New Orleans owing to a problem at the same spot. Just four days later, a Qatar Airways 787 was forced to land because of a generator problem.

All of these cases drew little public attention. But the US Federal Aviation Administration (FAA) must have registered them with concern because its inspectors were apparently already aware of the risks. According to one insider, the certification process turned into a lengthy exchange between Boeing and the officials.

A kind of special condition had to be created for the approval of the batteries because "the applicable airworthiness regulations do not contain adequate or appropriate safety standards," according to the FAA's proposal for the measure. The document also states that "other users of this technology, ranging from wireless telephone manufacturing to the electric vehicle industry, have noted safety problems with lithium-ion batteries," adding that such problems include "overcharging, over-discharging, and flammability of cell components."

Lithium-ion batteries have already been a source of worry in the aviation industry for a long time -- not as part of a plane's construction, but inside passengers' luggage. There have been repeated incidents in which laptops or mobile phones have burned during flights. Since 1991, the FAA has listed a whopping 132 such cases with this kind of battery, some of which set entire cargo compartments on fire.

'I've Barely Got Control of the Airplane'

In February 2006, the crew of a UPS cargo plane was lucky that they were able to land the DC-8 in Philadelphia just before the cockpit filled with black smoke, as one pilot described it. The crew had just escaped via the emergency chutes when the plane burst into flames. A report by the National Transportation Safety Board (NTSB) said the cabin roof had holes in it.

In September 2010, another fire took a more dramatic turn and caused a Boeing 747 to crash. A desperate pilot on board the UPS plane, which had just taken off from Dubai bound for Cologne, Germany, told air traffic controllers that the cockpit was full of smoke. He was unable to make an emergency landing because he couldn't see. "I've barely got control of the airplane" were among his last words recorded by the flight data recorder.

Flight-safety officials have engaged in heated discussions about whether lithium-ion batteries ought to be banned from airplane cargo holds. But mobile-phone batteries are a lucrative business for airlines, which ferry entire pallets of them around the world -- on passenger jets as well as cargo planes.

Past accidents could have been on the minds of the ANA crew piloting the Dreamliner when it landed on Wednesday. They were also probably aware that airport firefighters around the world have to undergo special training for handling the Dreamliner's aggressive lithium-ion batteries. This explains why the Japanese crew ordered passengers to evacuate via the emergency chutes, which is something usually done only in the most extreme cases because passengers almost always break limbs in the process.

Boeing now has a major problem. The FAA wants to revamp the entire certification process, announcing late Wednesday that US airlines would not be allowed to fly Boeing 787s until the company can prove that the batteries are safe. The European Aviation Safety Agency has followed suit, though only one Polish carrier is currently using a single 787. Airlines in Japan, India and Chile have also opted not to fly any Dreamliners for the time being.

Boeing engineers will now be forced to satisfy officials with tougher testing of the batteries. Another option would be installing more warning sensors on the batteries. "Boeing must now fear the safety recommendations that the NTSB will release about the fire in Boston," says Hiatt. "It's not yet clear how far-reaching the consequences will be for Boeing."

In the worst case, the FAA could ban lithium-ion batteries from airplanes altogether, though aviation experts view this as unlikely. That would force Boeing to practically rebuild the Dreamliner.