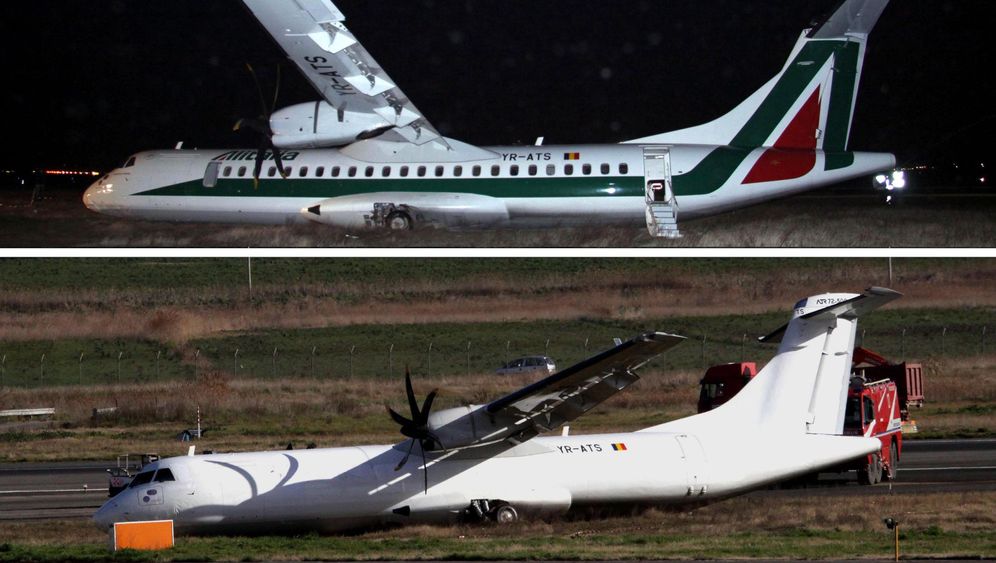 Sixteen people were injured, two seriously, when an Alitalia plane veered off the runway and crash landed into the grass in Rome on Saturday night, with its landing gear collapsed.

In a mysterious development, however, the ATR 72 turboprop plane was repainted before daylight on Sunday, with any sign of the Alitalia logo or its green, white and red livery removed. The aircraft, whose logo could still be clearly seen immediately after the accident, had a fresh white coat of paint on Sunday, as it sat abandoned in a ditch next to the runway.

The aircraft belongs to Romanian airline Carpatair and had been operating the route between Pisa and Rome on Alitalia's behalf. At the time of the accident, it was carrying 46 passengers and four crew members. Alitalia has blamed strong winds for the incident.

Alitalia's deal with Carpatair, signed in September, is aimed at reducing the airline's costs, but union representatives allege it is putting passenger safety at risk. Alitalia pilots and flight attendants said they would strike on Monday to protest the partnership with Carpatair.

Workers already went on strike for a day at the end of January. Last month, a Carpatair flight between Ancona and Rome had to make an emergency landing, and earlier in the month, a cabin pressure problem on a plane meant passengers had to wear oxygen masks.

Carpatair owner Nicolae Petrov told reporters on Sunday that the airline's flights between Rome and Bologna and Rome and Pisa had been suspended pending an investigation of Saturday's accident.