It wasn't a dream job, but it was a job at least, Pascal Präkelt, a trained cook, said to himself when he started work in the distribution center of online retailer Amazon in Werne, western Germany, on Nov. 15 last year.

He had been unemployed in the previous months and Amazon had offered him the prospect of a job, if only for four weeks initially. He shifted washing machines, refrigerators and dishwashers into trucks during the busy pre-Christmas period. Other employees packed DVDs, food mixers and books into boxes.

The pay was €9.65 ($12.88) per hour. He had worked for less than that as a chef, and Präkelt's employment agency had said that Amazon would offer many of the temporary workers permanent jobs after the month was over. The company did indeed ask him back later -- but it wasn't quite how he had imagined.

Amazon runs logistics centers at five locations in Germany. In Werne, the company hires 2,000 extra workers during the Christmas retail season. In Leipzg, it hires more than 2,800 and in Bad Hersefeld, the biggest Amazon site in Germany, it recruits an extra 4,500 people.

There's a simple reason why the US giant likes to hire unemployed people: they work for six weeks for the price of four weeks, thanks to a state subsidy that covers their pay for the first two weeks, which are declared as unpaid training time.

The government introduced the subsidy to aid the re-entry of workers into the job market and to enable them to get to know the job. The employer can decide in those two weeks whether the applicant is suitable for the job.

During the training period, new recruits continue to receive their state unemployment benefits. Once the two weeks are over, they get ther regular pay. That's the theory, at least.

But the practice looks different at Amazon. Instead of really creating jobs, the online trader prefers to keep on hiring auxiliary staff. In Bad Hersfeld, more than a third of the workforce is on temporary contracts. Amazon sometimes re-recruits workers, who don't really need a training period but nevertheless have to go through their 'practical training' period yet again.

In Werne, more than a thousand unemployed people this year have gone through unpaid training, but only half of them really got the temporary job, according to trade union sources.

In Rheinberg, where Amazon opened a distribution center two months ago, the figure was 413 -- and the share of them that get hired isn't much higher. It looks as though the group could be systematically abusing German benefit payments in order to secure cheap labor.

Critics in Internet forums have been labelling Amazon as "cheats" or "exploiters." The Düsseldorf regional branch of the Federal Employment Agency (BA), which pays out unemployment benefits, has calculated that Amazon saved just under €1 million in wage costs in North Rhine-Westphalia in 2010 alone.

The labor minister of North Rhine-Westphalia, Guntram Schneider of the Social Democrats, has complained about what he calls the "scandalous practices." But he should be aware of the loopholes the company is using.

The model, one of many job creation instruments, doesn't forbid a company to apply the scheme in the same location repeatedly. Amazon has used that vagueness in the rules.

Packager Präkelt and may of his colleagues applied for a temporary job again this year. He was recruited in the summer and had to go through an unpaid "working-in period" which again was covered by the Federal Employment Agency.

Employee representatives estimate that around half of the more than 9,000 temporary staff at Amazon belong to a firm regular base of employees who are re-employed every year -- but only after they have gone thrugh the practice period.

'A Mistake That Must be Corrected'

Indirectly, Amazon is therefore earning two-fold and three-fold in this way. "It is a scandal that Amazon lets its booming Christmas business be state subsidized," says Martin Behrsing of the Erwerbslosenforum Deutschland, a group representing unemployed people.

The Employment Agency is also alarmed: "It wasn't envisaged that clients would go through several (training) measures at the same employer," says Aneta Schikora of the North Rhine-Westphalia regional office. The fact that this appears to happen in thousands of cases at Amazon is "a mistake that must be corrected," she said.

That will likely be difficult, though. None of the 178 labour offices in Germany has statistics on who is going through how many state-financed training periods. In a first step, one labor agency and one job center in North Rhine-Westphalia have stopped funding these training measures at Amazon.

Amazon itself is evasive when asked how many of its temporary staff have gone through an unpaid training period several times. "We have turned several hundred temporary contracts into permanent contracts each year in recent years at our Bad Hersfeld site," the company says. Creating permanent jobs is the general long-term goal, but only "when our business growth allows it."

Amazon's sales have more than trebled since 2006. 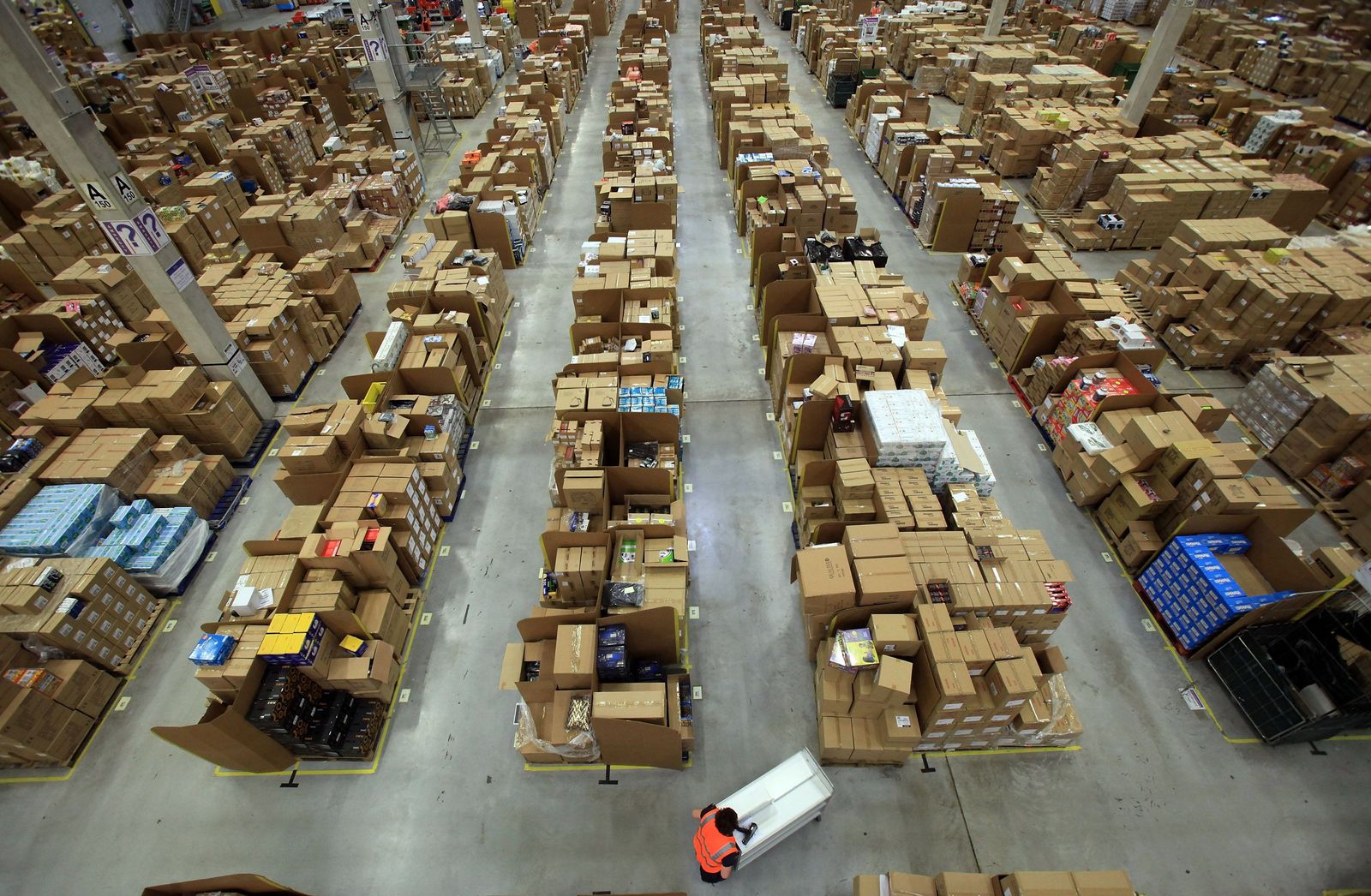 An Amazon logistics center. The German unit of Amazon is accused of cashing in on German employment subsidies.