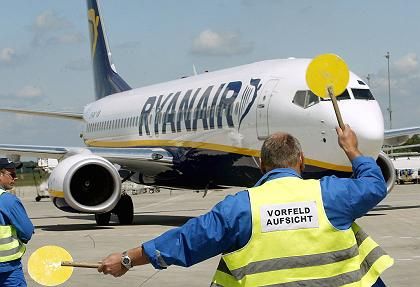 Now a new generation of discount carriers is set to make Southwest look downright generous. The latest breed is borrowing a page from Ryanair, the Irish carrier that roiled airlines across the continent with near-zero fares and scant amenities -- and became the biggest European airline in the process. They're charging for seat assignments, checked bags, early boarding, and more. Want some water? Get your wallet.

Hop on the Skybus

The latest entrant in this niche of extreme budget travel, Skybus Airlines, takes to the air on May 22. The Columbus (Ohio) company is led by a small band of commercial airline veterans, including several from Southwest. Its pitch is based on using second-tier airports, lean staffing, Internet-based ticketing, revenue from beer and snack sales -- and super-cheap fares starting at $10.

Skybus will at first fly from its Columbus hub to three cities: Burbank, Calif., Kansas City, Mo., and Portsmouth, N.H. It expects to expand to eight cities nationwide by June 12, with further expansion through 2012, when it will have a fleet of 80 jets. The company will zealously avoid major airports in cities including Atlanta, Chicago, and New York, where major carriers can easily dump fares, add capacity, and squash newcomers. "We don't like the big hub airports," says Skybus Chief Executive Bill Diffenderffer, a former attorney at defunct Eastern Airlines. "An awful lot of the traveling public is tired of being No. 20 in line to take off. There really is an easier way to operate."

Well, at least cheaper. Legacy carriers have long elicited headlines and passenger groans as they scrimped to cut costs and fix their horrendous finances. AMR Corp.'s American Airlines tossed pillows from many of its flights, and Northwest Airlines chucked pretzels.

But the new generation of airlines is taking "no frills" to new heights. Allegiant Airlines, a relative newcomer that serves smaller cities, assesses $2 to check a bag, $2 for a soda or water, and $11 if you want to reserve a seat. In March, Spirit Airlines dropped fares as much as 40 percent on some routes, but began charging fees for things such as checked bags, snacks, and drinks. Some carriers have toyed with the idea, à la Ryanair, of selling ad space on tray tables and overhead luggage bins.

Skybus will charge $5 per checked bag and $10 for "priority" boarding, and if you have around $500,000 to spend, it will let you paint your company's logo on one of its Airbus A319s. (Nationwide Insurance is already painted on one plane.) That's straight out of the playbook of Ryanair. "You want luxury? Go somewhere else," Ryanair CEO Michael O'Leary told BusinessWeek last year.

The concept has far-reaching implications. In essence, these newcomers are unbundling travel services, allowing customers to pay for only those services they care to use, while offering in return a bargain-basement fare. Ryanair's O'Leary envisions a day when seats will be free on some flights, and airlines will derive their revenues from hotel bookings or liquor sales.

So far, such efforts have been largely confined to smaller cities and leisure markets. But if Skybus is successful as it pushes into markets such as Los Angeles, Boston, and Seattle, expect some major airlines like Delta Air Lines, US Airways, and Northwest to imitate some of the efforts to cut back even more on creature comforts in exchange for cheap fares.

Today, however, the upstart airline model is based on a belief that huge numbers of Americans are underserved by existing carriers. They live in areas too small to support service and too far from hubs, or they're too middle-income to support the kinds of fares on which legacy carriers build their businesses. For example, Allegiant, operated by Las Vegas-based Allegiant Travel, serves smaller towns including Lansing, Mich., Duluth, Minn., and Cedar Rapids, Iowa, with nonstop flights to Las Vegas, Orlando, and Tampa-St. Petersburg.

The demand they're finding is surprisingly strong. Skybus CEO Diffenderffer says the airline sold 90,000 seats its first day online when news of the $10 fares was circulated via mass e-mail. "People were buying seven and eight tickets for trips they didn't really even plan to take," Diffenderffer says. "The opportunity to increase the number of people who will fly really is dramatic when the price comes down enough. There really is a much greater demand for travel than what you see in the numbers."

The new airline has marquee backing: Skybus raised $160 million in startup capital from investors such as Morgan Stanley, Fidelity Investments, and Nationwide Financial Services. Diffenderffer's pitch is that his operation is an "e-commerce company" that will use its Web site and online advertising to bolster travel-related hotel and rental car business in a way that no other US airline has thus far. "It's not just so much that the costs come out, but that the revenues come in. And that's the important distinction," he says.

Company officials chuckle at what they dub "the Ryanair question": the oft-heard query that Skybus is merely a Ryanair clone transplanted across the Atlantic. Still, the similarities are striking. Skybus will fly primarily to secondary airports, as does Ryanair -- often quite far from the metro area it aims to reach. For example, "Seattle" service goes to Bellingham, Wash., about 90 miles north. Flying to Boston? On Skybus that'll actually land you in Portsmouth, N.H., 56 miles north.

Skybus also offers "Rules of Flying" spelled out on its Web site. No. 3? "Bring a book. We're not big fans of fancy in-flight entertainment systems. So grab that best seller at the airport, or buy a Sudoku puzzle onboard if you're feeling brainy." And No. 4: "Don't call us. We don't have a phone number. Seriously. We'd love to chat, but those phone banks are expensive." And forget about refundable tickets. "If you need to change a ticket, your punishment for breaking a date with us is $40," Skybus says.

All that may strike some as unduly chintzy, but Skybus, Spirit, and others see the approach as a way to satisfy customers -- and keep investors happy in what has long been a troubled industry. Allegiant has been adding flights, and in its most recent quarter, pushed its load factor up nearly 1 percent to 82.6 percent. That's higher than most rivals, and comfortably ahead of the 78.1 percent from American, the world's biggest carrier. Allegiant's parent went public in January; the shares have gained more than 20 percent, closing May 18 at $30.19.

While launching a new airline may seem crazy at a time when so many are struggling, Diffenderffer, a leadership coach who wrote a business book called The Samurai Leader, takes a "zen" approach to the business opportunity of getting more people to fly: "The trick in zen, so to speak, is to see things that other people don't see because your mind is open to it."