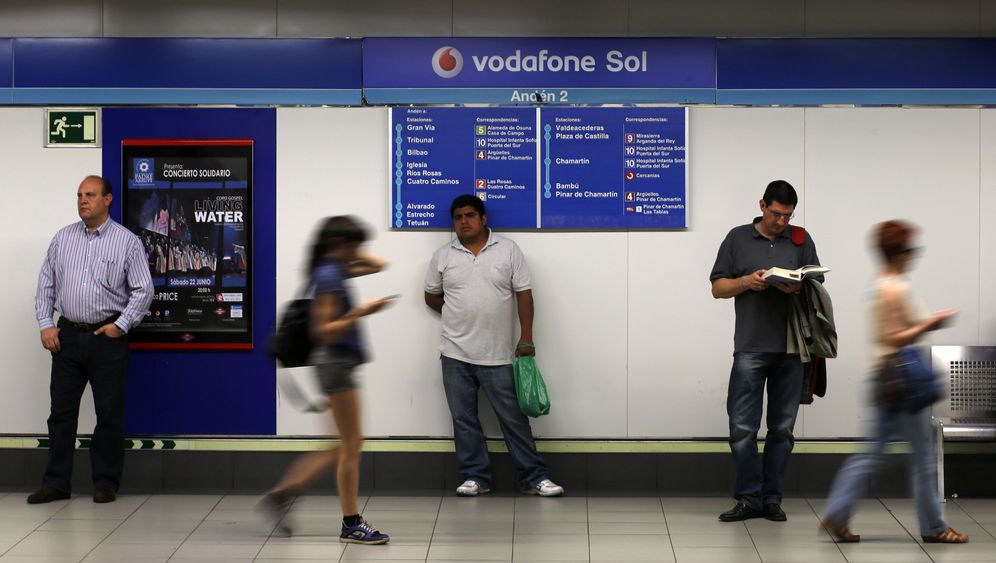 Sol, is the Spanish word for sun. Could there be a better name for the most important square in Spain's capital. The square, where Puerta del Sol, or the sun gate in the old city wall, once stood, marks Spain's geographic center. From this ground zero, the national roads lead out into the country, and it's where the kilometer counting begins. Three subway and two commuter train lines also converge under the square.

But so much for Sol. As of early June, the announcements on the subway identify the famous square as "Next station: Vodafone Sol." Even the time-honored signs at the metro entrances were replaced. Now the red logo and name of the British wireless group are displayed on new enamel signs. Starting in September, line 2 will simply be called "Vodafone."

The advertising generates €1 million ($1.3 million) a year in revenue for the capital region, which is deeply in the red. Its government headquarters building is located at the front of the square, where Ignacio González, the conservative president of the Madrid region with the Popular Party (PP), has his office. He finds the new revenue model convincing, and he now wants to offer companies other subway lines as PR vehicles. In the last five, crisis-ridden years, the company that operates the Madrid metro has seen its passenger numbers decline by more than 12 percent, and it has accumulated a record €500 million ($655 million) in debt. González wants to generate additional revenues by privatizing the city bus lines.

Although Madrid residents shake their heads over such tonterías, they no longer resist the foolish things their administration does. After five years of growing unemployment and an economic recession, Spaniards are demoralized. With debts of €7.4 billion, the capital is the most highly indebted city in the country.

Mayor Ana Botella -- the wife of conservative former Prime Minister José María Aznar, also with the PP -- would like to bring the Summer Olympics to Madrid in 2020, following the city's third attempt to capture the games. Her predecessors have already invested more than €6 billion in the effort, and she needs at least another €2.5 billion. That might explain why, in recent months, Botella has begun to sell off public buildings and properties -- even if she hasn't managed to raise very much money so far. A Chinese bank snatched up a magnificent building near the Prado Museum at a price discount of almost a third.

The fire sale also included 26 works by Spain's best-known contemporary artists, which were part of the city hall's inventory. Botella justified the sale, saying the works had "only decorative value."

Madrilenians feel resigned and, if they are scoffing at anything, it is another bizarre idea: Popular Party politicians want to build Eurovegas, a giant entertainment complex, on a 750-hectare (1,850-acre) site in the southwestern part of the city. Under the plan, skyscrapers would shoot up from the wheat fields in the coming years, to house casinos, hotels and convention centers. Backers claim the project, which would become one of the biggest construction sites in Europe, also has the potential to create up to 10,000 jobs, chicken soup for the soul in a country with 27 percent unemployment, and with 682,000 people out of work in the Madrid region alone.

Madrid region President González inherited the project from his predecessor Esperanza Aguirre, a major People's Party figure. For years, Aguirre wooed Las Vegas casino magnate Sheldon Adelson, a staunchly right-wing supporter of the Tea Party and advocate of settlement construction in Israel. The €17-billion deal was sealed over cold gazpacho at Aguirre's house last August. Now there are only a few legal problems standing in the way.

They could be cleared away quickly, the president of the region promised. He hopes to lay the foundation this year so that the complex can open in 2017. But Adelson, who will celebrate his 80th birthday in early August, hasn't presented any plans yet. He's still waiting for some guarantees, including one that smoking will be allowed at the gambling tables -- a move that would require the lifting of strict anti-tobacco laws.

To sweeten the deal for Adelson, Madrid has already reduced its gambling tax from 45 to 10 percent. The American investor, one of the 15 richest people in the world, was given permission to build his structures as tall as he wishes. Minors, accompanied by adults, will also be permitted to visit the gambling city. All of this would normally have been impossible.

As another incentive for the American billionaire, in late June the regional president gave the go-ahead for a new airport in the area -- even though Terminal 4 at Madrid's main airport, completed in 2006 at a cost of €6.2 billion, is far from operating at full capacity.

But last Wednesday the country's highest court put a temporary end to the privatization of healthcare. On the past few Sundays, thousands of doctors and nurses in white robes demonstrated against the plan on Madrid's central square, of course -- at Vodafone Station.