Deutsche Bahn is getting used to apologizing to its customers. Griping is something of a national sport in Germany and the rail operator has long been a favorite subject for bellyaching, particularly in recent years as problems have mounted, delays have increased and missed connections have become the rule rather than the exception.

But the company's apology on Thursday was different than its normal request for understanding after yet another hour-long hold-up. For one thing, Deutsche Bahn is expressing regret for delays and cancellations to come. And for another, the company has found a culprit: Siemens.

The German rail operator announced on Thursday that delays and cancellations this winter are to be expected due to Siemens' failure to deliver an order of 16 new ICE trains that was made way back in 2008. Originally, Deutsche Bahn had hoped to receive the trains last December, but the delivery date was pushed back to this December. Now testing of the new ICE 3 trains have revealed problems with operational software, leading to further delays.

Deutsche Bahn said that the Christmas season will be particularly tight and that the train shortage will mean a reduced capacity of some 3,200 passengers a day. "We really could have used the trains," said Berthold Huber, head of long-distance rail service. German rail has 253 ICE trains at its disposal and was hoping that the new trains could be used as reserve vehicles for busy days.

A new delivery date for the trains has not yet been pinpointed, though tabloid Bild Zeitung reported on Friday that the heads of Siemens and Deutsche Bahn will meet soon to discuss possible compensation for the delays and determine when the order might finally be filled.

The company's ICE problems are not the only difficulties the company has faced recently. In summer, it was revealed that Siemens faced losses of up to €500 million as a result of having underestimated the difficulties associated with building electrical substations on platforms in the North Sea, part of efforts to attach German offshore wind farms with the mainland grid.

Partially as a result of writedowns associated with that debacle, the company's earnings for the 2011-2012 fiscal year, which ended in September, showed a 27 percent drop in profit relative to the prior fiscal period. And earlier this month, the company announced a €6 billion cost-cutting program. German papers on Friday focus on the recent failures of Siemens.

"Siemens is a rather complicated company which manufactures a wide range of products, including gas turbines, ultrasound systems, water purification facilities, industrial machinery and also trains. Because most of these things are far away from the everyday lives of most consumers, the company doesn't worry too much about its own image in the way that, for example, an automobile company must."

"It is an attitude that company managers should quickly change. Because when train delays and cancellations begin accumulating in a few weeks time, everyone will know who is guilty: Siemens, the technology giant whose trains aren't ready for primetime because of software problems. It can hardly get worse."

"Falling profits, cost-cutting programs, a pullout from the solar business: There hasn't been a lack of bad news surrounding Siemens in recent months. What is a delay in ICE train deliveries by comparison? A glitch? An embarrassment? No, it is a disaster."

"The most disturbing thing is that such problems have become normal at Siemens. The same thing happened with the project to build offshore electrical substations as part of the effort to connect wind parks in the North Sea to the mainland power grid. Just as with the ICE order, top management learned much too late that the complexity of the project had been vastly underestimated and that the production of the offshore platforms would require much more time and money than had been expected."

"Blame for both failures can be laid at the door of Siemens CEO Peter Löscher. Siemens has always run into problems on large projects, but Löscher had insisted that his company would fix the problem. He was heavily involved in the North Sea project as well as in the negotiations with Deutsche Bahn. He has yet to deliver."

"The delays shine the spotlight on the cost-cutting program Siemens recently announced. The company hopes to save €1 billion alone through fulfilling orders without losses by not promising more than it can deliver. Yet a cost-cutting program that focuses primarily on profit margin is not a great lever for reducing mistakes. That is especially true of the company's rail branch."

"Thus far, Siemens has been German rail's preferred supplier. But it doesn't have to stay that way. Foreign companies, in France for example, are ready to take over. And should Siemens not get their ICE problem under control quickly, it could have greater consequences than contractual penalties and a blow to its reputation." 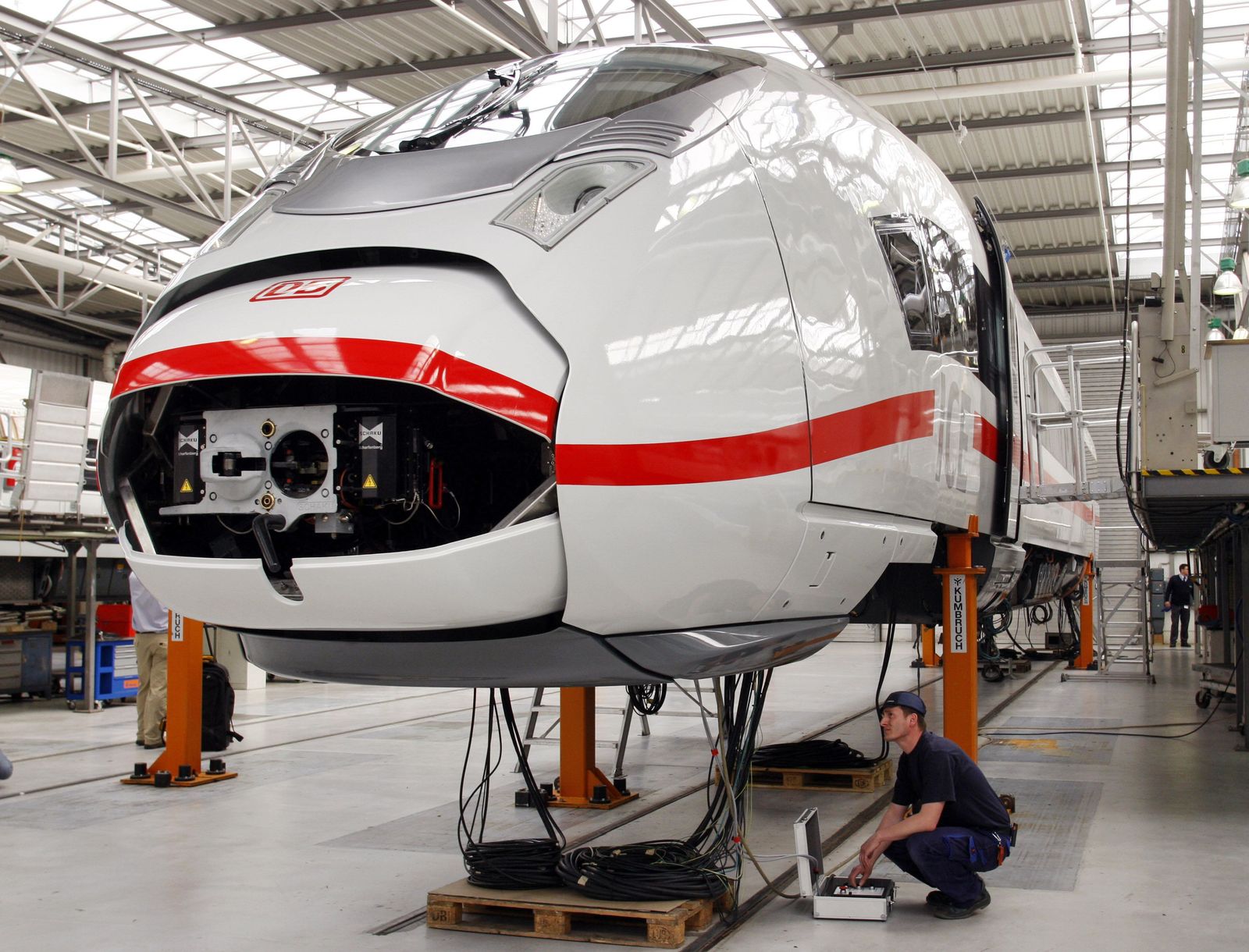 Not yet on track: A new ICE 3 train under construction.