A member of German Chancellor Angela Merkel's cabinet is calling for a radical solution to the desperately needed expansion of high-voltage power lines across the country, a critical infrastructure project that has stalled in recent months. Ilse Aigner would like to see the partial nationalization of the country's electricity grid in order to ensure that massive power lines required to transport green energy from offshore windfarms and other sources to the industry-heavy regions of southern Germany are finally built.

The consumer protection minister, a member of the Christian Social Union (CSU), the Bavarian sister party to Merkel's conservative Christian Democratic Union (CDU), seems to have struck a chord with the call, too. Many experts in business and politics believe that Germany would be better off with a national power grid that is partially or even fully owned by the government -- especially at a time when the German electricity market will have to be completely revamped because of the Energiewende , Berlin's policy of phasing out all nuclear power plants by 2022 and ensuring that 80 percent of the country's electricity supply comes from clean energy by 2050.

It would also constitute the correction of what many consider to have been a historic mistake: the sale in recent years of power grids owned by the major energy companies in Germany like RWE, Vattenfall and E.On. Those divestitures have contributed to an atmosphere that has made it extremely difficult to create the national grid needed to implement the government's new policy, passed in the wake of the Fukushima catastrophe.

Aigner's initiative, which the CSU voted to support last week at a closed meeting in the spa town of Wildbad Kreuth, throws the government even more off-course in its clumsy handling of the Energiewende. The minister is playing into the hands of the opposition Social Democrats and their Green Party allies, who have long called for government control of the German power grid.

Shortly before Christmas, Aigner wrote a letter seeking the support of Germany's vice chancellor, Economics Minister Philipp Rösler of the business-friendly Free Democratic Party, also a junior partner in Merkel's coalition government. In it, she demanded that he back "the federal government's entry into the grid operators' market" -- in other words, a partial nationalization of Germany's power lines.

A "strong government partner" could "provide security" in connecting offshore wind farms to the German power grid, she wrote. The proposal has been floating around for some time, she noted, adding that he should examine it "again, and thoroughly." Voters, Aigner reminded Rösler, don't understand why they should pay higher electricity prices to cover the risks of the federal government's shift away from nuclear power and toward green energy, while grid operators are raking in "a high, guaranteed return on their equity."

Rösler never replied to the letter, and only said in an interview that he totally disapproved of Aigner's idea.

But both Aigner and the political opposition in Berlin have strong arguments, given the dramatic nature of the situation. For the Energiewende to succeed, Germany's grid will have to be expanded and rebuilt in record time.

Green Energy Needs to Find Its Way to the Grid

In the future, a large share of electricity in Germany will no longer be generated in power plants near major metropolitan areas. Instead, the electricity will come from solar and biogas plants, as well as offshore wind farms, mostly in the North Sea and Baltic Sea. The goal is to generate clean, green energy and supply it to large parts of the country. The only problem is that the German electricity grid isn't ready to be connected to the wind farms and transport energy to southern Germany.

According to the current plans approved by the federal government, in the coming years the four grid operators in Germany are to build 1,550 kilometers (963 miles) of high-voltage power lines, including several direct-current transmission lines from north to south. At the same time, dozens of wind farms will have to be connected to the terrestrial power grid through new underwater cables that will cost billions to install. These measures, say the environment and economics ministers, as well as industry representatives, must be "tackled immediately" if the prestigious Energiewende project is to succeed within the foreseeable future. But the steps taken to date are nothing short of paltry.

Of the lines that have been planned for years, less than 250 kilometers have actually been built. The project has become bogged down, especially in the critical northern region. On Wednesday, Japan's Mitsubishi announced it would invest €576 million ($765 million) to help one grid operator, Holland's TenneT, connect offshore wind farms to the power grid. In recent months, however, TenneT has fallen under severe criticism in German political quarters because it has not succeeded in establishing the necessary connections to the wind farms operated by major energy companies like RWE and E.on. And Wednesday's deal represents a relatively small part of the work that remains to be done.

Even though the federal government offers extensive loan and liability guarantees, the banks and insurance companies that normally finance such projects have considered the risks to be too high to assume. And because the Dutch operating company apparently lacks both the right management and the necessary equity capital, the planning and start-up of the costly offshore wind farms has been repeatedly delayed.

Even the pro-industry Economics Ministry is losing patience with TenneT, and has summoned company representatives to deliver a status report on Jan. 30. Ministers from the northern German states and the head of the Federal Network Agency, Jochen Homann, will also attend the meeting. "Then we'll want to know whether or not investors are on board," say government officials.

But what happens if TenneT continues to founder? It's possible that solvent grid operators Amprion and 50Hertz will acquire the Dutch firm. "The willingness of the shareholders is certainly there," says Klaus Breil, the energy expert for the FDP parliamentary group.

Still, some are asking why the country doesn't implement a much bigger solution, one that involves a German national grid operator? In contrast to many neighboring European Union countries, Germany's most important high-voltage cables belong to companies, in which insurance companies, banks, capital funds and foreign operators, like TenneT, are calling the shots.

According to Krischer, the offshore business and individual, costly power lines create a new opportunity to build the core of such an organization. Other companies could also gradually incorporate their infrastructure into this national grid company, receiving shares in return.

There is broad support for such a national grid company. For instance, Norbert Römer, the SPD's parliamentary leader in the western state of North Rhine-Westphalia, is calling for a "national grid company with public investment." Even the power companies, normally strictly opposed to government intervention, are apparently not opposed to a public stake.

Executives at E.on, for example, say that combining infrastructure in this way would have many advantages. Today there are four grid zones with different line prices and individual control stations and control centers. If the companies were combined, both administrative costs and electricity prices could be reduced.

Felix Matthes, an electricity expert with the Institute for Applied Ecology, based in the southwestern city of Freiburg, advocates a step-by-step model. First, he says, a company could be established for the three new high-voltage lines and to connect the offshore wind farms to the grid. The current grid operators would be the majority owners and the KfW banking group, a government-owned development bank, would serve as minority shareholder. The federal government would gradually increase its share. A newly formed government agency could assume control of operations and planning.

Researchers with ties to industry also believe that a national grid company could be beneficial. Stephan Kohler, head of the German Energy Agency (DENA), feels that current conditions are in need of improvement. But, he adds, a nationwide grid operator would not necessarily have to be government-owned, but could also belong to private investors. "The government would have to get the ball rolling, though," says Kohler.

Federal Network Agency President Homann can also envision a grid company operating direct-current transmission lines. "This doesn't necessarily mean that the government has to be involved," he says. "In fact, it's much more worthwhile to actively continue developing the idea of citizen participation in the power grids of the future."

Homann supports an initiative by Environment Minister Peter Altmaier, which is jokingly referred to in his ministry as the "Power Grid VEB," a reference to VEBs, the publicly owned industrial enterprises in the former East Germany. Under the plan, the operators would issue bonds to finance the new power lines, which any citizen could buy.

He is currently putting his ideas into more concrete terms. The assumption, says Altmaier, a member of Merkel's CDU party, is that at least 10 percent of the sum needed for grid expansion, could be made available for bonds. "With a guaranteed return of up to 5 percent, this ought to be a very attractive investment opportunity," says Altmaier, who is opposed to the nationalization of power grids.

If citizens have to put up with the crackle of his new high-voltage lines behind their properties, the reasoning goes, at least they should be able to derive some financial benefit from the plan.

At the moment, there is nothing Altmaier and his fellow cabinet members fear more than the wrath of the people, especially over the steadily climbing cost of electricity.

Politically, it would be a disaster for Germany if the Energiewende were to fail. 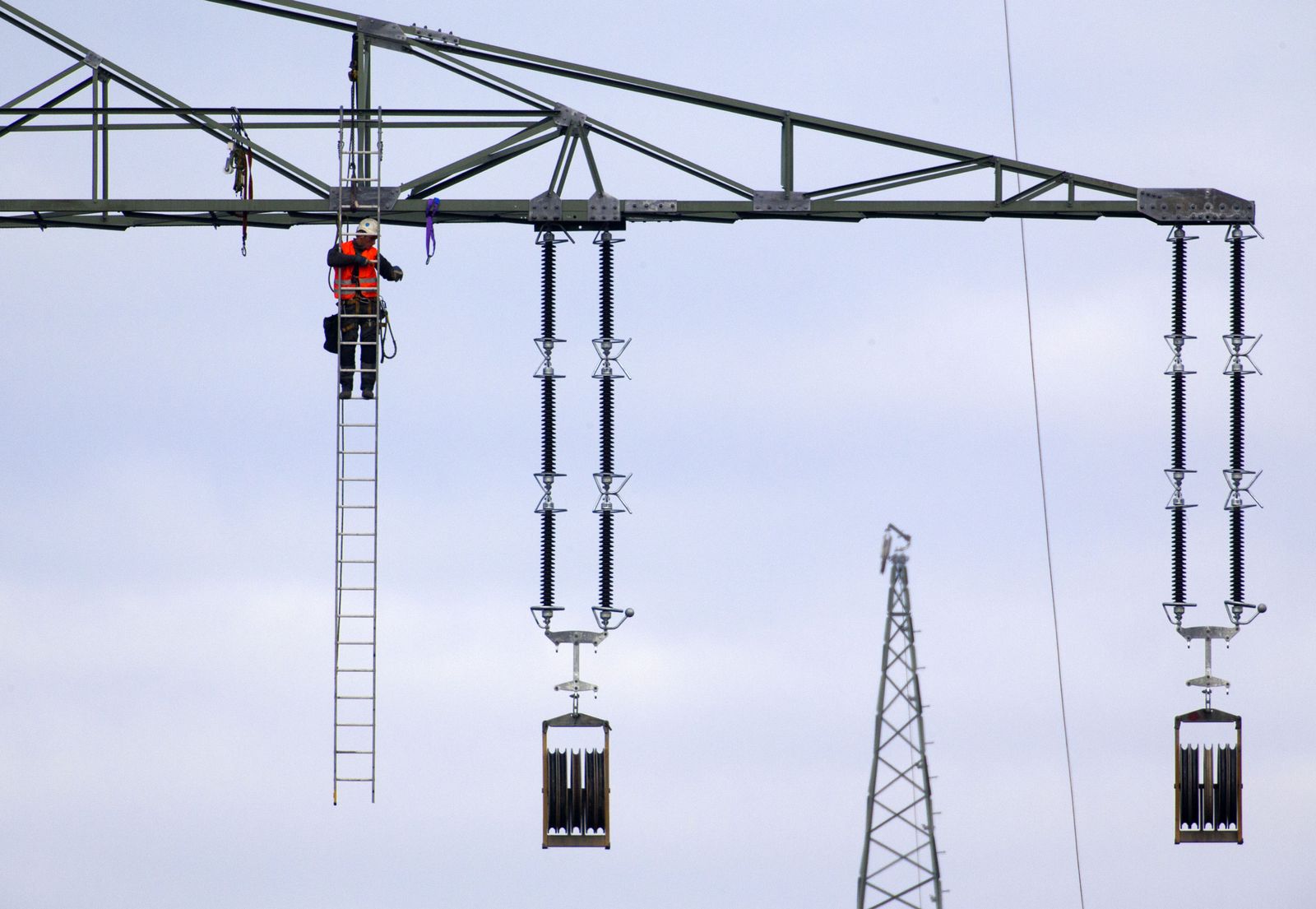 A worker helps with the construction of a high-voltage power line in northern Germany.