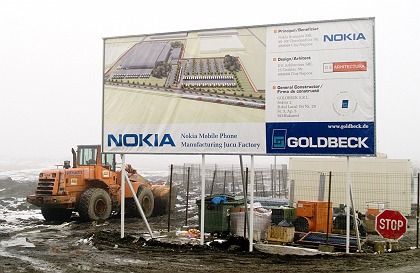 A billoard marks the site where Nokia is building a new factory near the Romanian city of Cluj-Napoca.

The Transylvanian sheep pasture hadn't seen much action since the departure of the Roman whose ruined villa was recently unearthed nearby. But now, with handset maker Nokia tearing up the field to build a factory, the modern world is coming to this corner of Romania at a speed that amazes even John Guerry, the 36-year-old Texan in charge of the plant. "Every time I come it looks different," Guerry says, stooping to pet a stray dog the workers have named Nokia.

Wearing a bright green safety vest, Guerry leads visitors across muddy ground toward the gray, corrugated metal walls of the factory. Less than five months after work began, the plant's exterior is nearly complete. Inside, specialists have already installed a bank of computers to track the flow of phone parts. In March the factory outside the city of Cluj-Napoca will begin shipping handsets around Europe and Africa.

Nokia chose Cluj, home of a well-regarded technical university, in part because of its ample supply of engineering graduates willing to work for less than a quarter of what Western Europeans make. The plant will come on line shortly before Nokia closes a factory in Bochum, Germany, which Nokia says has become too expensive. But low wages alone won't make the Romania plant competitive. To ensure that Nokia's $88 million (€60.7 million) investment pays off, Guerry will import the company's vaunted supply-chain expertise to a region linked to the outside world by a puny airport and a bumpy two-lane highway that snakes through the nearby Carpathian Mountains.

His challenge is to teach local workers to be as productive and exacting about quality as their counterparts in Brazil, China, and India. And he has to know enough about Romanian culture to create a workplace where skilled employees will want to stick around. Other multinationals such as St. Louis-based Emerson are also building factories in the region, so there is sure to be competition for the best people.

But if it all works, Nokia will extend its dominance of the global handset market. The company had a 38 percent global share in the third quarter of 2007, vs. 14.5 percent for No. 2 Samsung. Part of that commanding position, Nokia managers maintain, stems from the company's strategy of manufacturing closer to customers. Competitors such as Motorola make most of their handsets in Asia -- a disadvantage, Nokia believes. "When Motorola can't react as quickly as we can, we gain market share," says Guerry, who earlier in his career managed a Motorola plant in Texas.

Finding willing workers for the new factory won't be a problem. Cluj, a city of 400,000, is still emerging from the poverty left behind by one of Eastern Europe's most repressive communist dictatorships. Sparkling dealerships offer BMWs and Audis to the newly rich, but on the streets, forlorn-looking young men peddle homemade wooden coat hangers. Although official unemployment was 3.1 percent in November, many people earn as little as $180 per month at local enterprises. They are eager to work for a multinational offering chances for training and advancement.

In fact, citizens are nearly euphoric at the prospect of joining the planet's biggest maker of handsets. "Everybody has been asking me: Do you have any contacts? Do you know where to apply?'" says Bettina Binder, a 27-year-old regional manager for a cosmetics retailer in Cluj. At a Nokia-sponsored job fair in June, hopefuls from across Romania began queuing at 6 a.m. Eventually 8,000 applicants showed up, twice what Nokia expected and far more than it will ever employ. Early on, Nokia expects to hire about 500 people, a number that will gradually increase to 3,500 by the end of 2009.

Still, foreign companies in other emerging markets such as China and India have learned that finding and retaining skilled workers isn't easy. Wages rise quickly, and workers don't hesitate to sell new expertise to a higher bidder. One reason Nokia is setting up in Cluj is that its facility in Komarom, Hungary, has already tapped out the local workforce. Topflight managers are especially scarce throughout the developing world. Nokia won't say what it will pay workers in Cluj, except that wages will be competitive with the region's average of about $450 a month.

Nokia hopes to hang on to its workers with perks that people in richer countries might envy. The factory will have a cafeteria with free food, a gym, playing fields, and -- because Nokia is, after all, Finnish -- a sauna. "The plant will be a place where people enjoy working," says Guerry. Nokia also offers international opportunities not available from Romanian companies. The crew setting up the Cluj plant, for instance, includes workers from Brazil, Hungary, India, and Poland. In a show of respect to local culture, Guerry is requiring foreign staffers to study Romanian. Nokia plans to turn the plant over to local managers within four years.

All in the Same Bonus Boat

But even as Guerry fits the plant into the Cluj environment, he has to make sure the factory fully exploits the worldwide knowhow that has strengthened Nokia. One way the company does that is by giving factory chiefs financial incentives to help each other rather than competing and hoarding information. Bonuses for Guerry and his peers at Nokia's 10 other factories around the world are tied to the performance of the overall manufacturing operation. If one plant isn't operating at top efficiency, all the managers feel it in their paychecks. That's unusual in a business where executives are typically rewarded only for the performance of their own factories, says Kevin O'Marah, chief strategy officer of Boston supply-chain specialists AMR Research. "Nokia's collective compensation plan is incredibly smart," he says.

Maximum productivity is everything in the mobile phone business. Growth is coming from emerging markets, where many customers live on just a few dollars a day and can't afford to spend a lot on a phone. Nokia reported a profit margin of 22.6 percent on handsets in the third quarter even as the cost of entry-level models fell below $40. To hit numbers like that, Nokia pays attention to every detail on the assembly line. One thing Guerry learned while visiting a Nokia plant in India, for example, is that the factory is more efficient if operators stand between two lines, allowing them to service both at once. "When you're making 12 phones a second, a minor thing can make a huge difference," Guerry says.

One of his biggest worries is getting supplies into Cluj smoothly. The city's connections to the outside world are primitive by European standards. Business-friendly officials are trying to help. The runway at Cluj's tiny airport is being lengthened to accommodate jumbo jets for delivery of components from Asia and other locations. And near Cluj, US construction giant Bechtel is building the Transylvania Motorway, a $3.2 billion, four-lane road that will cut travel time to Hungary in half by 2011. Although it will be more costly to operate in Cluj before the region gets its infrastructure upgrade, Nokia wanted first crack at the best workers.

The local government also donated land for the factory and is building amenities such as a commuter rail station. So besides overseeing the plant, Guerry serves as a good-will ambassador to the town. In late December he sat in a temporary office signing Christmas cards to local dignitaries, which he later delivered to City Hall -- proof that operating comfortably in a strange culture is almost as important for a manager as, say, mastering logistics software. "You either get that," he says, "or you don't stay very long."