This train is amazing: It travels faster than any Porsche, and does so without producing any emissions whatsoever. It races through the Westerwald, a large forest in western Germany, at a speed of 300 kilometers an hour (186 mph), and it travels at 350 kilometers an hour (218 mph) in Spain. It understands the rail signal codes of six countries -- now including that of France.

On Sunday, Germany's high-speed train, the InterCityExpress (ICE), went into service between Frankfurt and Paris. Getting approval took 12 years and cost €28 million ($37 million) -- about the price of an entire ICE train. The additional signaling equipment now fills a sizeable wall unit in one of the first-class cars. Six passenger seats had to be forsaken in order to accommodate the control unit.

The reward for such outlays is a respectable reduction in travel time. The rail journey from the French capital to the German banking city will now take a good four hours. It used to take five-and-a-half and involved changing trains. The French high speed TGV also takes about four hours from Paris to Stuttgart -- a second route that was inaugurated simultaneously with the one to Frankfurt this weekend.

Knut Rothmann, who is responsible for the international long-distance services of Germany's national railway, Deutsche Bahn, the company that owns and administers the ICE network, says the "magical limit" has been undercut with the new rail line. On the new route, the ICE has finally become "more attractive than the plane," he claims.

It's a nice thought, no doubt. Unfortunately, though, it's not true. Peter Mnich, one of Germany's leading rail experts and a professor at Berlin's Technical University, places his trust in a different formula: "In order to beat the plane, the train has to reach its destination within three hours," he explains. "With such a travel time, the train can achieve a market share of up to 80 percent."

"More Attractive than the Plane"

That's precisely what France's experience with high-speed rail shows. There, the TGV has displaced the plane on many domestic routes. The TGV even covers the distance of 750 kilometers (466 miles) separating Paris and Marseille in just three hours.

Deutsche Bahn, by contrast, accounts for only seven percent of total passenger traffic in Germany. The rail provider has only shown strong results on a few short-distance, high-speed routes like Frankfurt-Cologne or Berlin-Hamburg. But the medium-distance routes -- such as those between Hamburg and Cologne or Frankfurt, stretches that take about four hours -- reveal just how unpopular a travel time of four hours is. Lufthansa offers as many as 14 direct flights along those routes daily. Those in a hurry will continue to choose the plane.

Basically everything. And nothing illustrates the misery of Germany's railway infrastructure as exemplarily as the new route from Frankfurt to Paris. It's only in France that the route is really new. The French invested €5.2 billion ($6.9 billion) in the newest high-speed line running from Paris to Strasbourg in the east. The new route closes the last major gap in the French high-speed rail network and ends a short distance from the German border.

And that's where the dilly-dallying begins. Only about one-tenth of the money invested in the new train route was invested by Germany. Among other things, the German money was spent on bringing the signaling equipment on an old and essentially unchanged track up to date. The result is that the ICE train will reach a speed of 320 kilometers per hour (199 miles per hour) only when traveling west of the French-German border. On German territory, the train barely reaches a maximum speed of 200 kilometers an hour (124 mph). The TGV traveling between Paris and Stuttgart suffers the same fate.

The difference reveals itself especially drastically to train passengers traveling from the city of Saarbrücken on Germany's western border. Paris is a good 400 kilometers (249 miles) away from Saarbrücken and can now be reached in an hour and 50 minutes. But the trip to Frankfurt, which is only 180 kilometers (112 miles) away, takes a full two hours.

The first Franco-German high-speed rail project invites study of mistakes in transport policy that reach back as far as the time when Helmut Kohl was chancellor of Germany (1982-1998). Half a dozen transport ministers have "not been forward-looking enough" since, Mnich complains. They notoriously gave priority to the car. "But in France, there was no parallel expansion of highways along the TGV routes, for example," Mnich explains.

The results of the failed policy are evident today: France disposes of about 2,000 kilometers (1,243 miles) of high-speed tracks, whereas the figure for Germany is only about half that.

But Deutsche Bahn's Rothmann blames an even higher authority than himself for this state of affairs: "The Lord was involved in that too," the graduate physicist says. Deutsche Bahn isn't faced with man-made obstacles, in his view, but by mountains.

Germany has far more low mountain ranges running through it than its western neighbor. The mountains force the railway builders to construct expensive tunnels, since high-speed routes have to be as straight as possible. Rothmann has a formula to sum up the problem: "Every minute of travel time saved by building new train tracks costs us €100 million ($134 million)." In France, the necessary outlays are "many times lower," he adds.

But Germany's railway planners have wallowed in this disadvantage whenever they could. Almost all high-speed tracks built to date drill their way, subway-like, through mountainous terrain. The railway network's gaps are to be found, of all places, on completely level stretches of land -- areas where not a single tunnel would need to be built. They include the areas between Hamburg and Hanover and Hamburg and the populous Ruhr Valley, as well as one track section between Frankfurt and Mannheim that is part of the route to France where the ICE train is now wasting precious time.

And so Germany's railway industry -- technologically one of the most advanced in the world -- becomes a tragic hero. The third-generation ICE train, built by Siemens and Bombardier, is recognized as a top product, and its manufacturers are receiving export orders from places as far away as China. 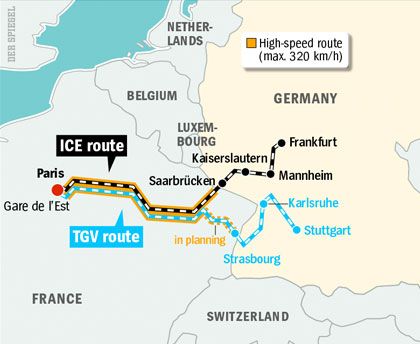 Map: The new high-speed rail connections between France and Germany

From December onward, the high-speed trains made in Germany will travel at a speed of 350 kilometers an hour (218 mph) between Madrid and Barcelona, a world record in scheduled passenger train traffic. It's only in its home country that the ICE rattles about like a commuter train on a majority of its routes. The home-produced super train is forced to travel at snail-like speeds in Germany, of all places, where the absence of speed limits for cars is considered an irrevocable dogma.

A different slowdown factor Germany's train services struggle with is political: "Unfortunately the trains have to stop for every mayor," Mnich explains. Non-stop trips between major cities -- one of the keys to the French high-speed network's success -- hardly exist in federalist Germany. The ruling politicians of Germany's states and cities are too powerful.

Deutsche Bahn explains the many stops by arguing that Germany is far more densely populated than France. But does this justify the fact that almost every ICE train traveling between the north and the south of the country has to stop in the town of Göttingen (population 129,000)? Mnich considers this an "incomprehensible mistake." The French generally build around cities of such size. The TGV even races past Lyon, France's second biggest city, in order to complete the journey from Paris to Marseille on the Mediterranean in just three hours.

In Germany, by contrast, just about any lord of the manor has a good chance of being able to spoil the trip for high-speed trains. The two Westerwald towns of Limburg and Montabaur (populations 34,000 and 12,518 respectively) have become the running joke on this section of railway tracks -- two cumbersome stops have been placed on the speedy ICE line between Frankfurt and Cologne just to appease officials in the states of Rhineland-Palatinate and Hesse.

The train journey on the new route to Paris is slowed down by three "system stops" or train stations where every ICE is being forced to stop. All three are located on German territory: Saarbrücken, Kaiserslautern and Mannheim.

In Rothmann's view, such compulsory stops don't just reflect the power of the local town councils. They also embody a valuable tradition: "That's a directive that goes back to the time of the Bundesbahn (the state-owned German rail provider that became Deutsche Bahn in 1994), according to which it has to be possible to use every train like a streetcar, meaning it has to stop as often as possible."

The Stop at Every Station Principle

Since the French do what they can to negate the commuter train principle, the option of a separate train track was initially considered. On May 22, 1992 the transportation ministers of Germany and France signed the agreement on the high-speed train connection between the two countries in La Rochelle. In Article Five of the agreement, they reached a consensus on "provisions for the later creation of a new high-speed route north of Strasbourg."

This slightly longer route would allow the ICE train to travel almost exclusively on high-speed tracks, instead of trundling through Germany's hilly Saarland region. The train could speed from Frankfurt to Paris in about three hours, without any intermediate stops. The train option would win out over that of taking the plane.

But it looks like that will never happen. Karl-Friedrich Rausch, who heads Deutsche Bahn's passenger transport division, has already issued a written response to the project. In it, the top train service director explains: "The necessity of a direct route past Strasbourg arises only when the volume of traffic between the locations in question rises so strongly that additional sprinter connections such as Paris-Frankfurt are operating at full capacity."

The idea follows the logic of the old state-owned railway exactly: It's only when a poor product is in unusual demand that Deutsche Bahn rewards its customers with a better one.

In the meantime, Frankfurt-Paris will remain a flight route for many people.