David Marsh, 68, is a wanderer between the worlds. In the 1980s and '90s he worked as a journalist for the Financial Times, before then switching to investment banking and became a consultant. Marsh is British, yet he is also a profound expert on Germany and is the author of the standard work "The Bundesbank: The Bank that Rules Europe." He is also a recipient of the German Order of Merit. Today, as head of the Official Monetary and Financial Institutions Forum, the think tank he founded, he focuses on his favorite topics: Economic policy and central banks. The latter, he believes, are degenerating into appendages of governments because they are increasingly engaged in state financing.

Marsh: I wouldn't be so defeatist, but it is clear that a new era is dawning. The Fed is further constraining the ECB’s freedom of maneuver.

DER SPIEGEL: How so?

Marsh: The Fed has always been careful to keep inflation and unemployment under control with its monetary policy. That is now over. Because of the pandemic, unemployment has risen sharply, and at the same time, inflation has been very low for 10 years. There are reasons for this, but they have nothing to do with the central banks.

DER SPIEGEL: What are the reasons?

Marsh: People are getting older and saving more. Digitalization is covering companies' capital requirements. Globalization has brought millions of new people into the labor market, which has driven down wages. All of this has put the brakes on inflation. From now on, fighting inflation is no longer the Fed's most important goal. And we also have very low inflation rates in Europe.

DER SPIEGEL: If inflation is no longer a problem, why is the Fed's decision to tolerate higher consumer prices such a big deal?

Marsh: Because inflation is not dead, but can once again become a real danger given the debt-financed government spending deployed in the fight against the pandemic. The central banks should be ready to fight rising inflation rates. But they are abandoning the fight.

DER SPIEGEL: How much inflation are we actually talking about? There are some believe the global economy is heading back to the hyperinflation of the 1920s.

Marsh: I think that's completely exaggerated. If industry recovers from the corona shock, prices could rise by well over 2 percent. That would be just fine for politicians, because if prices rise, the nominal gross domestic product also grows. And as long as that increases faster than debt, the sovereign debt level will melt away essentially automatically.

DER SPIEGEL: What would be great for finance ministers …

Marsh: ... but would be accompanied by social injustice. Those who own their own homes or stock portfolios are happy because both become worth more with inflation. But those who have hardly any assets and live in rented accommodation feel rising prices much more directly. The gap grows bigger, which in turn helps the populists. We see this happening already.

DER SPIEGEL: Critics say that the basket of goods and services used by the ECB to measure the inflation rate, which in turn is used as the basis of its monetary policy, is calculated incorrectly. Do you agree with that criticism?

Marsh: I think so, yes. The real inflation is higher. As I said: Real estate prices, including rents, are decisive for the cost of living and the shopping basket does not reflect that. But that is not the real problem.

DER SPIEGEL: What is?

Marsh: The politicization of the central banks. The new Fed strategy is the strongest sign that the central banks are taking on more and more tasks for which politicians are responsible, such as fighting unemployment. The ECB, which intends to present its new strategy in 2021, will follow in the Fed's footsteps. We are witnessing the end of independent central banks - which was partly a myth anyway.

Marsh: Ever since the Fed announcement, this myth has been shattered. The central banks are more politicized than they have been for decades. In Japan, this has been the case for a long time. In Europe, French President Emmanuel Macron set an example in this respect by cleverly taking Chancellor Angela Merkel by surprise and making Christine Lagarde president of the ECB.

DER SPIEGEL: So we have a situation in which inflation is higher than the official figure, which central banks tolerate – first tacitly, but now officially. And that is done as a way to support nation states? The accusation of central banks providing state financing is one of the harshest that can be made.

Marsh: It is more complex than that. In general, it is quite right that central banks support goals set by politics. But they must not lose the ability to do the opposite when necessary, for example when inflation rises. Central banks must not allow governments to use inflation as a weapon against debt.

DER SPIEGEL: Did Fed Chairman Jerome Powell cave in to Donald Trump? The president had been tweeting for quite some time that the Fed should ease the reins to allow more growth.

Marsh: On the one hand, Powell has adjusted strategy to reality. At the same time, the colossal public pressure that Trump has been exerting has had an effect. When Trump summoned him to the White House at the beginning of 2019, Powell should have said: "Get my secretary to give you an appointment, but not for six months." Of course, he didn't do that.

DER SPIEGEL: Monetary policy is never static, like politics in general. Powell's successor can change the strategy again if inflation rises too much.

Marsh: And he will. And that will be easier for the US Federal Reserve than for the ECB - a huge problem.

Marsh: Because eurozone member states are growing at radically different speeds. Germany could tolerate inflation rates of 3 to 4 percent, if only to reduce its export surplus. But that would be practically be the death knell for Italian competitiveness. The eurozone does not have a finance minister or an economics minister because there is no political union. This is the birth defect of monetary union.

DER SPIEGEL: ECB President Lagarde is urging eurozone member states to spend more money because the ECB is not omnipotent. Was that overdue?

Marsh: Yes, the monetary policy of the ECB was too lax for a long time, the fiscal policy of eurozone member states, especially Germany's, too strict. Fortunately, this has changed owing to the corona shock. The European Union’s recovery fund goes in the right direction. It's just as well that we British, the eternal nay-sayers, have departed. We would probably have prevented the fund from being established.

DER SPIEGEL: Is it not dangerous for governments to fund their aid programs with money generated by bonds the ECB buys on the market?

Marsh: It is. Germany is very sensitive to this type of public financing. This endangers the cohesion of the eurozone.

DER SPIEGEL: What should the ECB do?

Marsh: Announce in a sensitive yet decisive way that it will stop buying government bonds from mid-2021 if the economy has significantly recovered by then and if there is no further wave of infection. It urgently needs to signal that it is considering monetary policy normalization. Then, it can also be more flexible with regard to the inflation target. It must not give finance ministers the impression that it is always there for them. It was right for Lagarde to go all out in the pandemic. But in terms of political cohesion in the eurozone, the ECB must take into account the wishes of countries like Germany.

DER SPIEGEL: If the ECB stops buying sovereign bonds, two things will happen: Bond prices will fall, and interest rates will rise. It would be much more expensive for highly indebted countries like Italy, France and Spain to incur new debt. The alternative would be drastic austerity programs. That is something Macron will have to prevent if he wants to be re-elected in the next presidential elections in 2022.

Marsh: Despite difficulties from the Fed’s decision, the ECB must implement its own strategy, with subtlety and understanding. Otherwise it runs the risk of being made the scapegoat for everything that goes wrong.

Marsh: Not yet. That would only be the case if it buys government bonds directly from governments, or if the majority of central bank heads were ex-finance ministers like Lagarde. That is why it is so important to see who will succeed Yves Mersch of Luxembourg in the six-member ECB Executive Board at the end of 2020. If it were a politician, that would cross a red line.

DER SPIEGEL: Do you think that the ECB will be an issue in the 2021 election campaign in Germany, for example with regard to low interest rates and the German obsession with savings?

Marsh: I don't think so. Social cohesion in Germany is not working as well as it used to, because of the gap between the well-off and the less well-off. But compared to many other countries, the Germans are doing just fine. The outcry in Germany against the ECB’s bond purchases has been limited.

DER SPIEGEL: Will the eurozone survive?

Marsh: The error of not establishing a political union must be corrected. There are only two ways to get out of this impasse: Either the monetary union shrinks. Or it changes into a transfer union, for which the Germans in particular have to pay - with the danger of overreaching themselves. One of these two extreme options will prevail, probably the transfer union. Simply muddling through no longer works.

DER SPIEGEL: The Germans benefit most from the eurozone as an export market. Why should they overreach themselves?

Marsh: If it were so clear that the net effect is positive, then everything would be fine. But as so often, it depends more on perception than on reality. The next chancellor will have to take responsibility for this. It would need a chancellor with outstanding communication skills who can convey the benefits of the eurozone to the populace. Ever since Helmut Schmidt, Germany has not had such a politician. What is needed is a German Macron, but no matter how far and wide I look, I don’t see one coming. 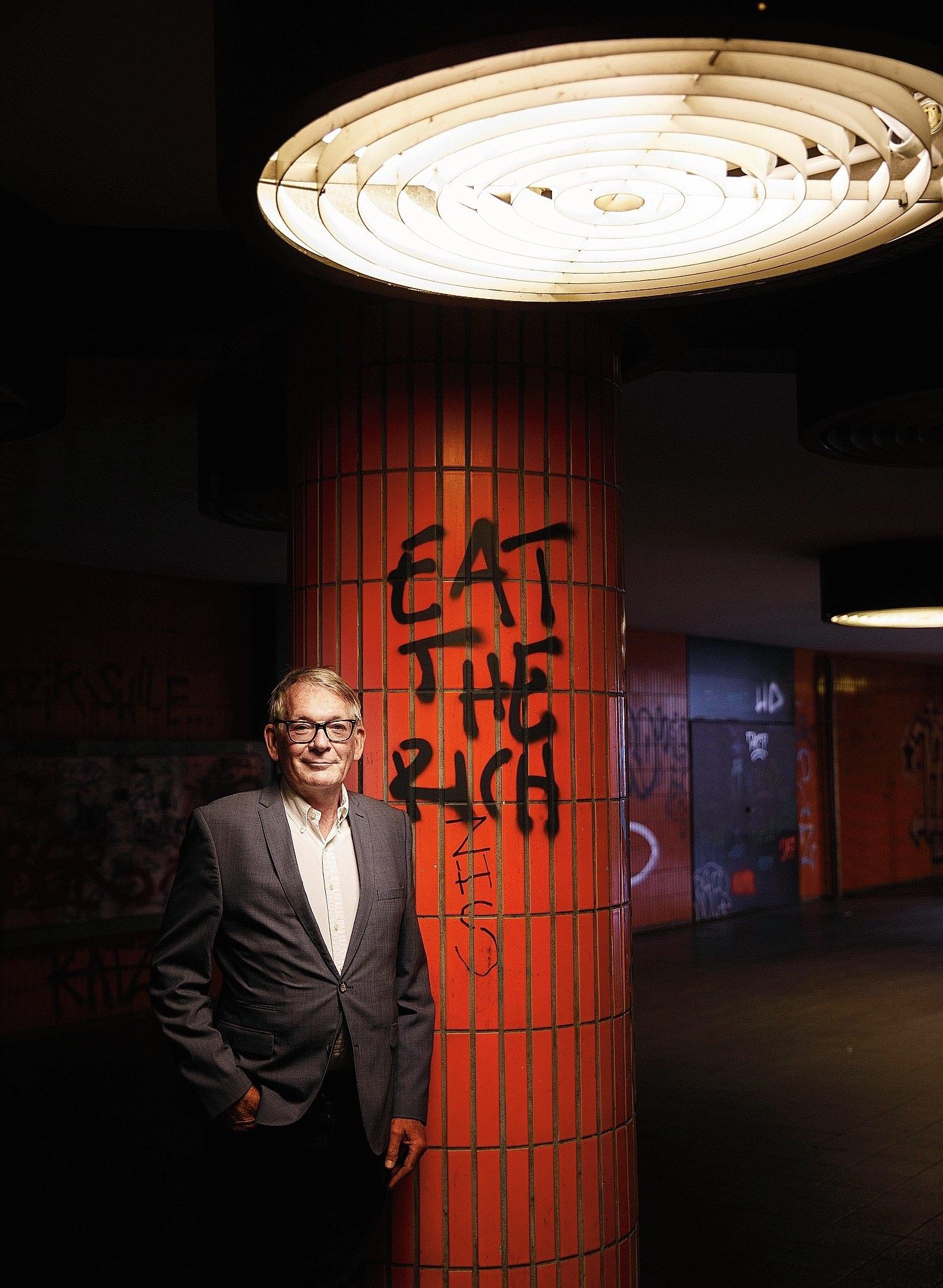 David Marsh: "Inflation is not dead."