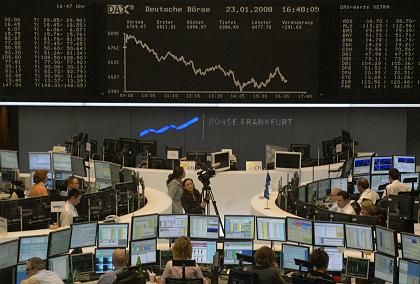 Stock markets have been suffering from the ongoing finance crisis.

For months, experts have been wondering just how bad the ongoing finance crisis might turn out to be. Now, Germany's Federal Financial Services Authority, known as BaFin, thinks it has the answer.

According to information obtained by SPIEGEL, an internal BaFin report says that shortfalls at finance institutions worldwide could end up totalling $600 billion (€380 billion). The shortfall comes as a result of ill-advised speculation on the US subprime market and resulting jitters in markets worldwide. BaFin says that its prognosis is merely a worst-case scenario. "Given what we know about the current situation on the markets, we presume that a total of $430 billion is more probable," the 16-page report says.

The paper also lists losses that have already been admitted to by various credit institutions: a total of $295 billion. Some 10 percent of those shortfalls are accounted for by German banks. Should that share of the damage remain constant, German banks can expect losses to be as high as $60 billion.

BaFin experts fear that the finance crisis will spread to other sectors of the economy. The turbulence could hit "other financial institutions outside of the banking sector," the paper says. The report lists hedge funds, insurance companies and retirement funds as being at risk.